Wishing Cup is, first and foremost, a game that’s inspired by Ancient Egypt. They brought it into the modern ages a bit with its graphics, and they also added the wishing cup element, but overall it’s just a game that uses scarabs, the Ankh and various other elements that are common in slot machines based on Ancient Egypt, and so I’d call it a very common kind of theme anyway. Among the offers that Wishing Cup has for us, I’d mention the expanding wild symbol especially, but also the scatter symbols, the free spins or the hidden passages which bring you hidden icons. It’s a game with 25 active lines, with 5x3 reels and with rewards of $5,000. 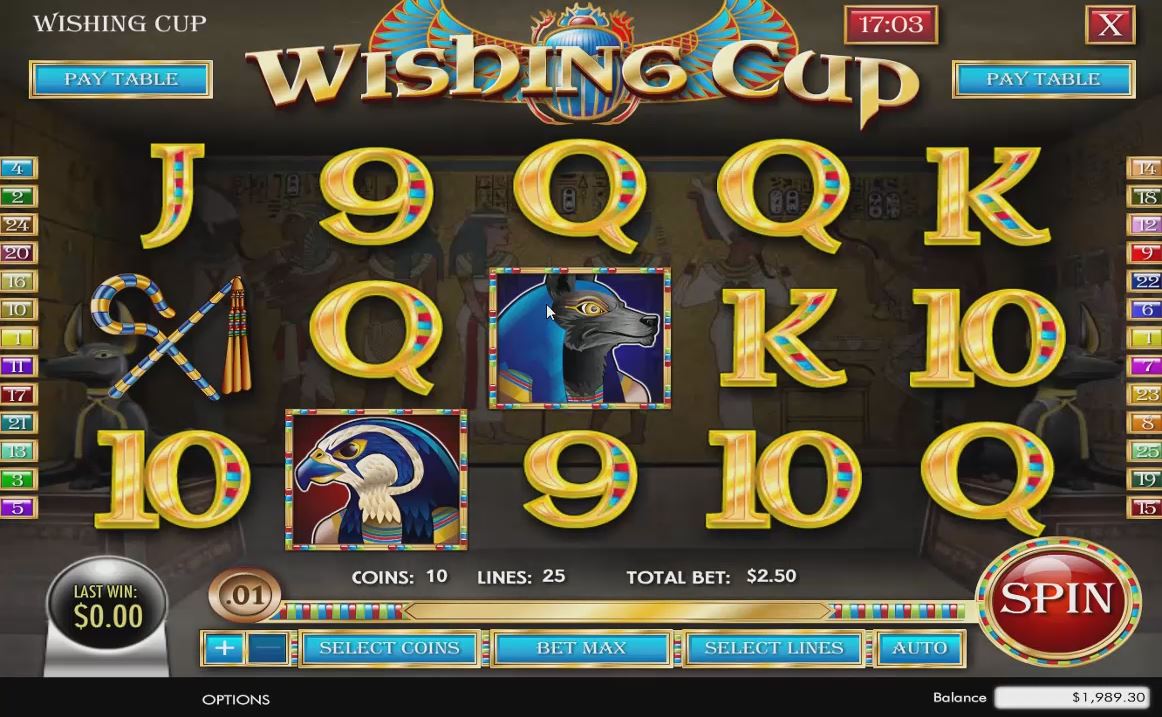 Wishing Cup gives us 25 lines to activate, but that’s just the maximum number, and you’re free to select as many as you want, even going with only 1 line if you just want to check out the game. However, if you want to get the most out of it, I’d suggest you increase the bet per line a bit, using as many as 10 coins, and denominations that reach values of $0.25. You can end up with bets of $2.50 per line, and $62.50 total.

As I’ve said before, the theme of Wishing Cup is 99% inspired by Ancient Egypt. You’re going to have a game where the action takes place inside a pyramid, the background showing a wall filled with drawings from that period, as well as two statues of coyotes placed on pedestals. There is nothing out of the ordinary in this game, with the exception of the Wishing Cup, which I’m not sure from what culture they borrowed it. In addition to the Wishing Cup symbol, the game will also deliver images of pharaohs, of Anubis, Horus, a priest, the Ankh, daggers, the scarab, tools and six Royal cards, made out of gold and with gemstones in them. It’s a game that manages to look modern, but I don’t think that it is enough these days. When you’re talking about an Ancient Egypt slot, of which we probably have over 100 titles right now, you need something truly unique to make it pop out. The design doesn’t do this for Wishing Cup, but let’s check out the features as well, before we give any verdicts.

The symbol and the feature that gives this game its name is the one showing a Wishing Cup. It’s a white cup with black drawings on it, and with two arms to its sides. It looks more like a ceremonial cup, than a regular one that you can drink out of. This is used by the game as a wild symbol, and it is reserved for the first four reels available in the game. It’s an expanding wild symbol, which can only turn symbols which are above it into wilds. The ideal situation is when you have it land on the bottom position of a reel, since it can turn all symbols that are above it. If it lands in the highest position, then it doesn’t expand at all. One of the scatter symbols used in this game is the one that’s showing us the Pharaoh Sarcophagus. It’s a symbol which appears anywhere it wants to, and as long as you get a minimum of three you will be rewarded with prizes (7x to 15x total bet) and with free spins. During the free spins, you will have the 3rd reel act entirely wild. Besides these features, which are common to most games, Wishing Cup also has a couple of surprises. One of them is the presence of the Secret Passages during paid spins. These can bring you mystery icons, which are transformed into regular ones. Another surprise is that the slot has three other scatters, whose only roles are those of prize triggers. They can pay 750x, 1,500x or 2,000x, and they just have to appear somewhere on the reels enough times, to reward you. 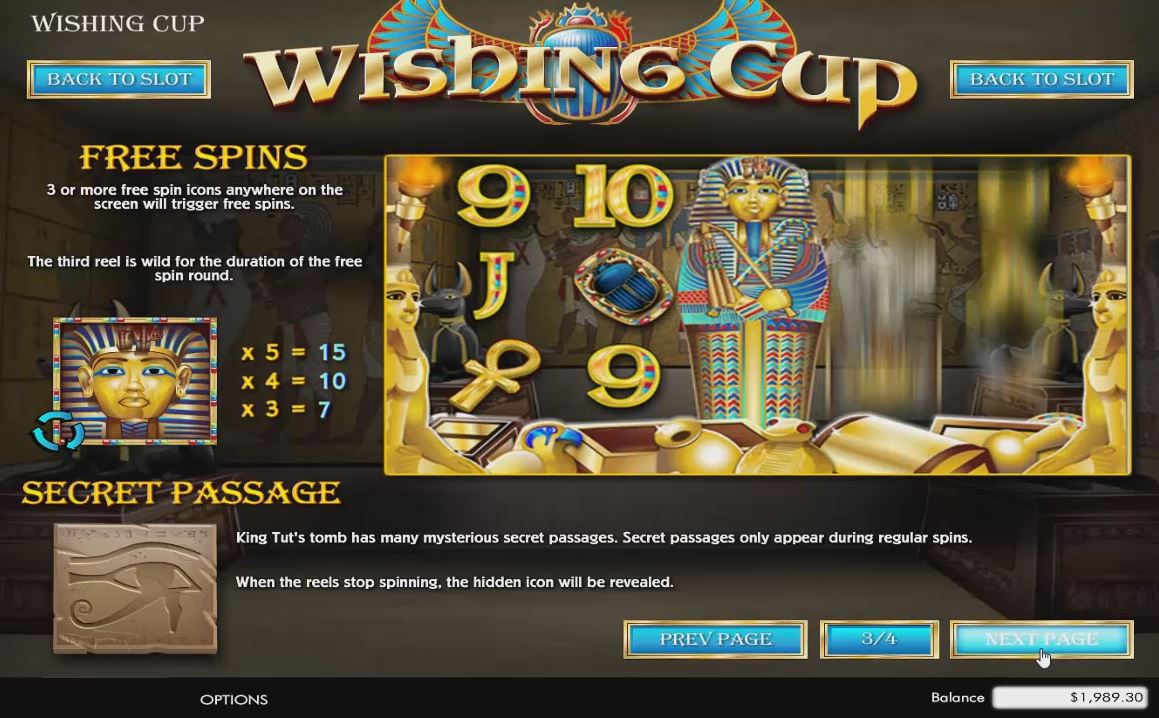 I did enjoy some aspects of the game, like the use of multiple scatter symbols to deliver the better payouts of the slot, but in a lot of other areas it is a very predictable title. It doesn’t help that it uses one of the top 3 most common themes of all times. 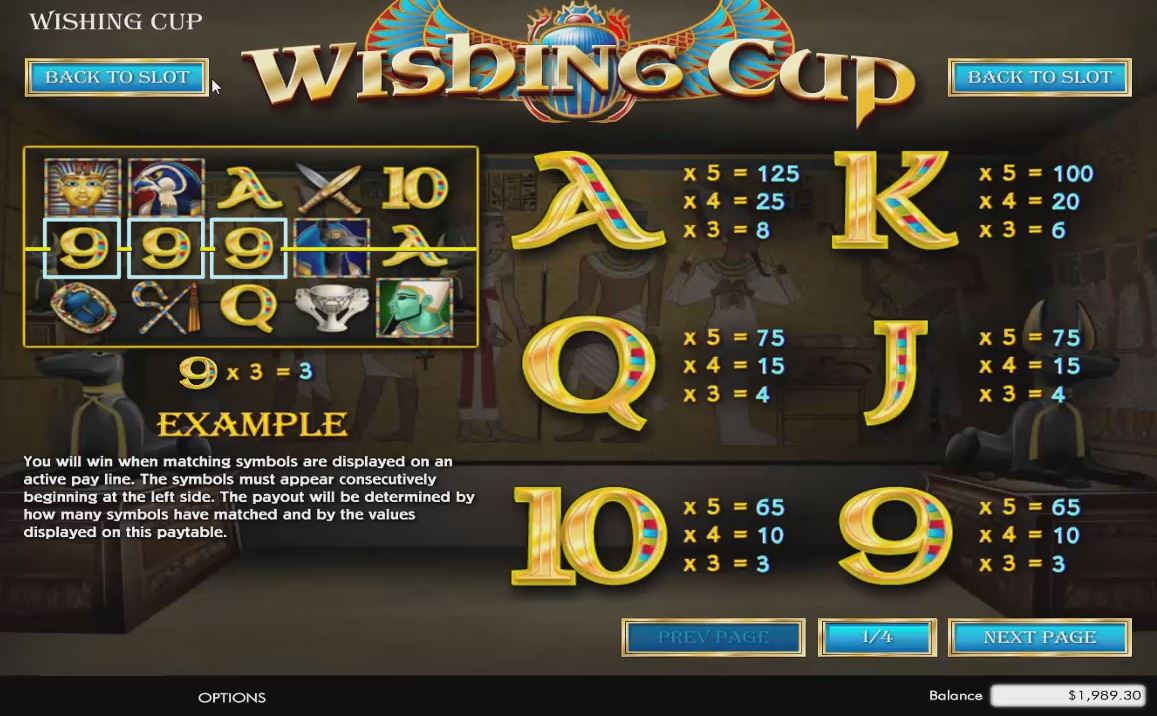