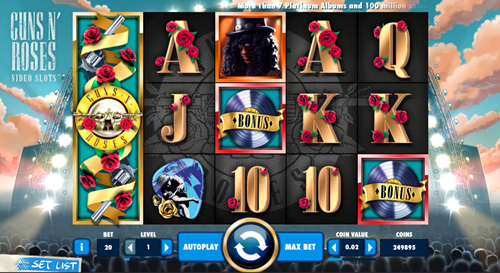 A name like Guns N' Roses shouldn’t need much of an introduction. The slot machine with this name was part of an entire series, called Net Ent Rocks. The Guns N' Roses slot was the first one out, followed by games designed around Jimmy Hendrix and Motorhead. Out of the three, I have to say that I enjoyed Guns N' Roses the most, and not just because it’s the band that I prefer. It gets the better features and graphics in my opinion. Guns N' Roses gets a regular layout, one with 5 reels and 20 win lines which are fixed. The top jackpot might get up to $7,500 at most, but at least there are plenty of features inside to improve the payouts. Speaking of those features, you will find inside wild symbols in regular and expanding form, plus a couple of other versions at different moments. Also expect to get Bonus Wheels, scatter symbols, bonus games, free spins and Legend Spins.

Expect to have the usual Net Ent betting system at your disposal here. You wager on all 20 lines which are fixed, and you use bet levels of up to 10, with a similar number of coins selected for each line. The coin value will be taken to as much as $1, meaning that you can spend up to $10 for one line, and up to $200 total.

Guns N' Roses is a hard rock band which originates from Los Angeles, in United States, and it was founded in 1985. It’s been around ever since, with members sometimes changing for various reasons, and they have multiple albums that have made history. That is the theme that Net Ent chose for this game, and predictably enough the action takes place at one of their concerts, with the stage being visible behind the game area. For the symbols, you have the members of the band in the main regular symbols, the ones which pay the most, followed by images of records, guitar picks of different types, some logos and five golden poker cards which have red roses decorating them. The design quality is excellent, so that’s definitely one side of it that is worth mentioning. A special mention should go to the audio part. This being a game that’s inspired by a rock band, Net Ent managed to negotiate the rights to include five of their famous titles in the game, part of a playlist that you can listen at will inside. You have famous titles like Chinese Democracy, November Rain, Paradise City, Welcome To The Jungle or Sweet Child O Mine. For this alone, and I think that a fan of Guns N' Roses will love the game. This is not the kind of game where you have to turn down the volume when you spin the reels.

First, let’s take a look at the main wild symbol, which comes with the Guns N' Roses logo on it. These wilds can appear at random, in any position on the five reels. They can be used as regular replacements for most symbols, though there are exceptions, such as the Bonus scatters. You can get both regular and expanding wilds in the game. The latter are usable only in combination with regular symbols. A Bonus Record symbol is the only scatter that the game seems to get. It’s also only visible on the 1st, 3rd and 5th reels. You get this one in the main game, and from it you can obtain a feature when all its symbols are visible. It’s a bonus wheel, where you can trigger a prize in coins, a bonus game, or free spins. The Crowd-Pleaser is the name of the bonus game that you can trigger on the wheel. While it does have three levels that you can advance through, it’s basically a pick & click feature. You get a certain number of picks, and each one gets you coin wins. On top of those wins, you can also get free spin symbols and additional picks. If you get all three symbols marked Free Spin, from the three levels, you trigger 10 free spins. Another possible outcome from the Bonus Wheel is a feature called Encore Free Spins. 10 free games are part of it, and during each round you’re going to have one of the band members appear as a stacked wild symbol, placed as an overlay on one of the middle three columns. The other reels will also get that band member as a regular wild. The only unfortunate part here is that you can’t retrigger the free spins. Appetite For Destruction is what they decided to call a random overlay wild, which may trigger as you play the game. It will place a cross shaped collection of wilds on the reels, but only for that round. The second random feature is called Legend Spins. It’s a feature where you get one stacked wild during the triggering spin, after which there will be two re-spins for free, where there are two stacked wilds. The position of the stacked wilds changes for each re-spin. The third and final random feature is the Solo Multiplier. You can trigger it if you have at least three symbols that match on a line, and it will give you a multiplier of 4x to 10x for the wins which have that particular symbol in them.

As you can see, you can expect a lot of great features from the game, so naturally they had to make the top jackpot smaller. It’s at 750x here, so you can get up to $7,500 from it. The game has an excellent average RTP, of 96.98%.

I don’t see a single reason why you should skip this title. Whether you’re a fan of Guns N' Roses or not, there is no denying that Net Ent did a great job with this slot.