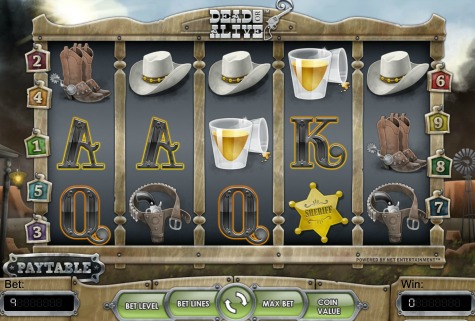 From Dead or Alive, players can expect to get Wild West inspired action, something that was not lacking in this category of games. The view of the Wild West seems to be showing us a regular farm on the prairie, with a big storm coming in, with a powerful wind and with lightning coming down from black clouds. That’s in the background though, and on the reels the view is a lot more typical for this sort of game. The Wild West influence is seen in the objects displayed and in the Wanted posters, but as you will discover in this review, there are some elements in it which are not as enjoyable. The game doesn’t seem like a typical release from Net Ent, and it’s not just the graphics that say this. The number of lines only goes up to 9, on 5 reels. The features are just as attractive as always though, with free spins, 2x multipliers, sticky wilds, scatters and regular wilds for the paid spins. We’re looking at a game with a jackpot of $45,000 for the base game.

You can’t spend that much in Dead or Alive, even if you wanted to. The slot has its 9 lines, which you may change as you need to, while their individual bets accept up to 4 coins, and with denominations which reach $0.50. The biggest value that is possible for the line bet is $2, while for all 9 lines you can spend $18.

We have a title which is inspired by the Wanted posters of the Wild West apparently. The outlaws that were portrayed on them were wanted either dead or alive, the reward was offered in exchange for proof of either. While we do see some Wanted posters with characters on them at one point, for the most part the inspiration seems to come mostly from objects that would’ve been used back then. The Wanted Poster and the Six Shooters are two major symbols, with features that can be triggered for the player. The  high paying symbols give us images of hats, gun belts, cowboy boots, sheriff badges and whiskey shots. Metallic poker cards were picked for the less important symbols. Net Ent usually releases games with all themed symbols, so seeing those letters and numbers on the reels was a disappointment. Graphics wise, it’s not a bad game, it looks decent, but it’s not the quality that we’re used to seeing from Net Entertainment. You don’t have a good reason here to play the game, not unless you’re a big fan of the Wild West genre.

In Dead or Alive, we’re seeing two feature symbols. One of them is the Wanted Poster, the wild feature. Wilds can be used as substitutes for all symbols, except for the scatters. In the base game they’re regular wilds, but they become sticky for the free spins. Having three, four or five wilds forming a combo directly will bring you a prize of 25x, 150x or 1,500x. Access to the free spins is obtained when a sufficient number of scatter symbols are visible on the reels, in any position. They’re not required to be on the same active line, but you need at least two visible in order to get a prize, and at least three to get free spins. The prizes can give you 2x to 2,500x total bet. You can win 12 free spins, where all wins will pay double the regular amount. Wild symbols that appear on the reels at this point will become sticky and remain in position until the end of the feature.

With the small bets possible in this game, it’s not a surprise that big rewards are not possible from the regular combinations. You can win $3,000 through the combination of five wilds. During free spins, the rewards jump up to $6,000 from those same wild symbols. The better reward seems to be offered by the scatter symbol, which pays up to 2,500x total bet, so up to $45,000 in this case. With an average RTP of 97%, this is a slightly better than average game from Net Ent, which has titles that range from 96% to 97% in most cases. This is the main reason why I think that the slot should be played.

Thanks to that average Return to Player, I’d say that Dead or Alive is worth a look, even though it’s disappointing in a couple of areas. If it was a game from any other developer, it would’ve been a good title, but Net Ent has quite a few that look better and are more fun.