The Incredible Hulk is a Playtech game, a branded one that’s based on the popular comic book with the same name, which is part of the Marvel Comics universe
Play The Incredible Hulk
8.2Total score
Bonus rounds7.5
Graphics9
Soundtrack8

The Incredible Hulk is a Playtech game, a branded one that’s based on the popular comic book with the same name, which is part of the Marvel Comics universe. There are both comic books and movies that were created based on the green monster that has this name, but in this case we seem to get a title based on the former. There are two versions for the game, and here we will take a look at the one with more lines, 50 of them being used on 5x3 reels. You will find a good range of features to play with, the game having a Smash Bonus, scatter symbols, free spins with 3x multipliers, plus there are also expanding wilds on certain reels. At most, you can get paid $120,000 during free spins, or $40,000 during paid ones. One should also take into account the Marvel jackpots when playing a branded game of theirs. 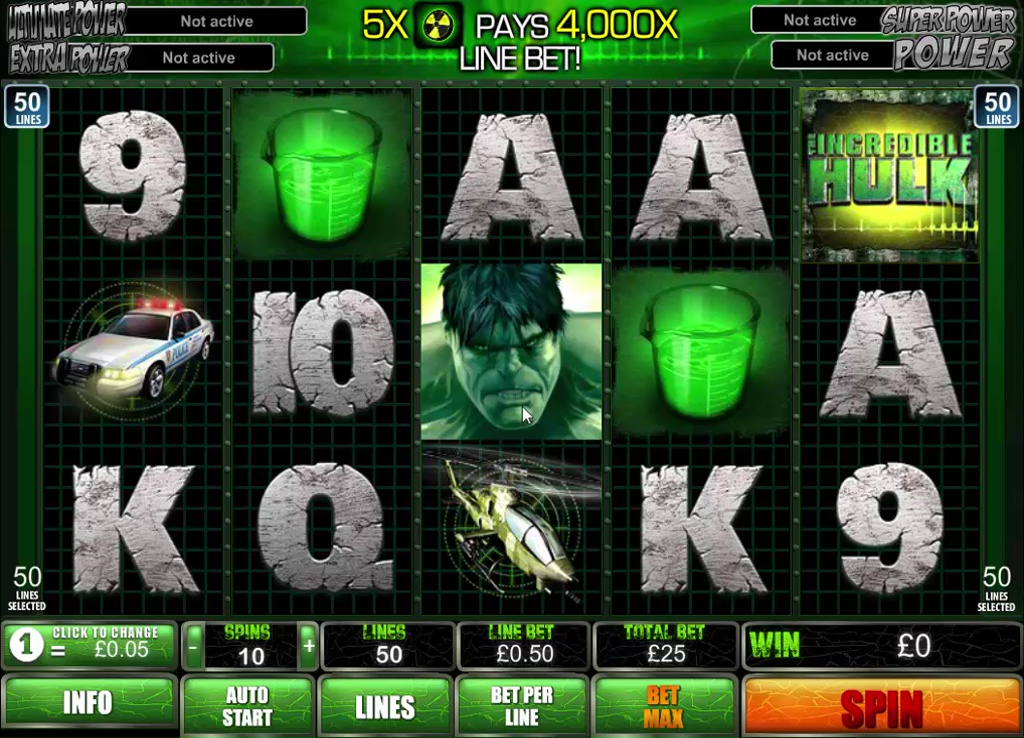 Most Playtech slot machines will allow you to change all aspects of your bets, within the ranges they provide you. You have the lines for example, up to 50 active each round, or fewer if that’s your decision. The coins are valued in the range of $0.01 to $1, and you can have up to 10 per line. The line bets of up to $10 will be turned into maximum bets of $500 by those that can afford to use that amount each round.

The Incredible Hulk’s theme is inspired by the comic book, if we go by the look of the symbols which were selected for it. You have the Hulk, the green monster, as a main character and as the image of the wild that can expand and cover the full reel. There are things like logos or green liquids on those reels, along with police cars, military helicopters and danger signs. The half a dozen poker cards which were chosen for the game are all made out of stone. If you look at the actually graphics quality, I doubt that you will be terribly impressed with the work that Playtech did here. You have a couple of interesting symbols, appropriate for the theme, but just as many are simple and just made out of stone. There is no real background image to help out either, just a green screen. The focus is on the green color, which is appropriate for this theme.

Feature wise, I’ve enjoyed the offer that The Incredible Hulk has. You get more than just the basic wilds and scatters, so you don’t get a chance to get bored quite like you do in other slot machines. To start with, take a look at the Hulk wild symbol, which you’re going to get only on the reels 2, 3 and 4. On those reels, you will be allowed to use the symbol to replace others on their lines, so that you can get more wins with its help. Depending on the actual position on which the symbol lands, you might get something extra from the slot. For example, having Hulk on the middle position on reel 3 will turn it into an expanding wild on that column, after which you get two free re-spins with the wild reel locked. If you get the middle three reels to all have the Hulk wild on them, then the symbols expand on all of them, and then you get one free re-spin. The free games are not missing from the slot, and they are offered with the help of the game’s own logo. As a scatter, it is needed present on three or more positions, to get you 10 free spins and tripled wins. If you get wins with the help of expanded wilds, those wins are also tripled. Finally, you can also get a Smash Bonus, a feature which needs the right logo symbol on the reels 1 and 5 at the same time. It’s a bonus game where you take on the role of the Hulk, and you smash three police cars out of seven shown, as well as one of the three helicopters. The cars will give you prizes, the helicopter will have a multiplier to use on them. 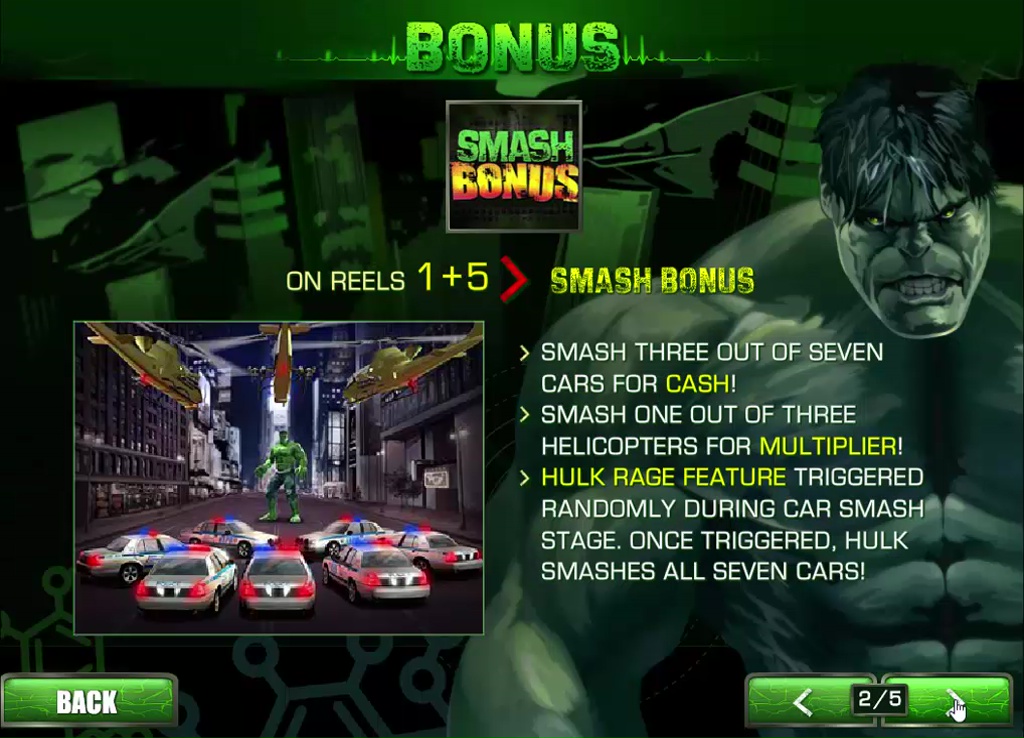 Random Marvel progressive jackpots are available, and they’re the ultimate target to have, at least the best paying one of the bunch. The alternative is in the prizes offered by the game, which reach a maximum of 4,000x during regular spins, or 12,000x during the free ones. The value would be at $40,000 for the former, and $120,000 for the latter. The slot’s average RTP is somewhat lower on the version with 50 lines, at least based on what is known right now. The game with fewer lines should provide you with better chances of taking home a win.

The Hulk is yet another comic book themed slot machine from Playtech, perfectly acceptable in its design and features, with big payouts, but only average returns for players. 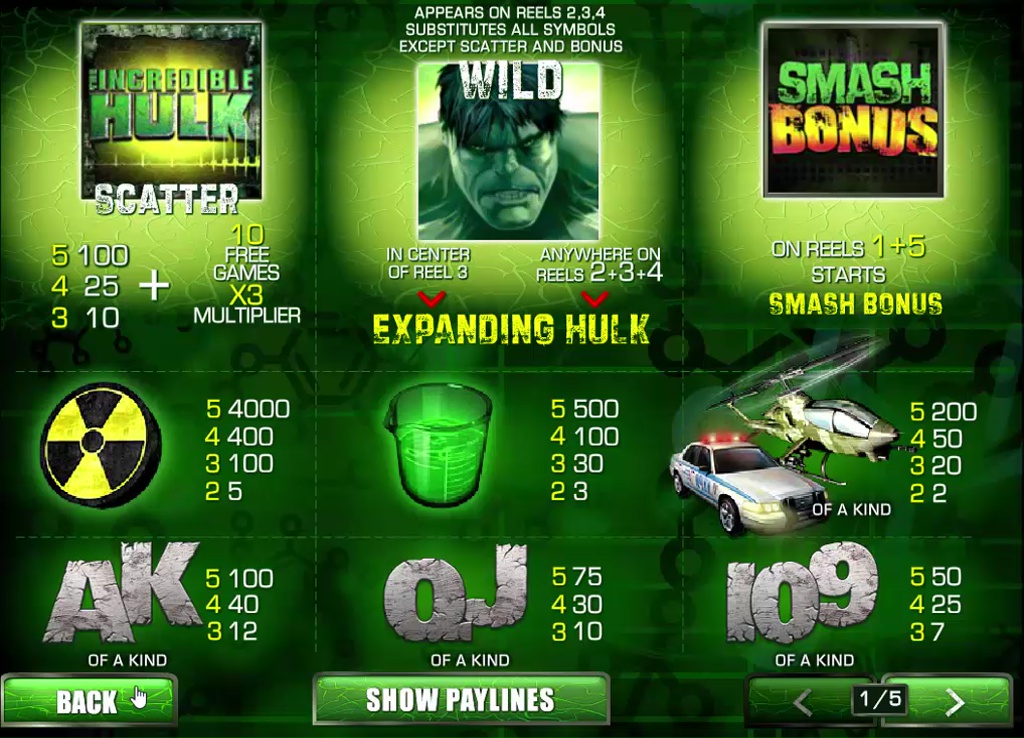