Captain America, one of the famous comic books from Marvel’s collection, has received its very own slot machine, and it is one that Playtech created. Playtech is well known for its strategy of focusing on branded slot machines, and they have dozens of such titles on offer, based on Marvel comic books, on TV series or popular movies. As for the game that Playtech came up with here, it will have 20 lines active at most, 5 reels as usual, and it will pay up to $25,000. There are two sides to the battle between good and evil, and so you have wild symbols for each of them, with multipliers. Free spins with power features may also be activated. 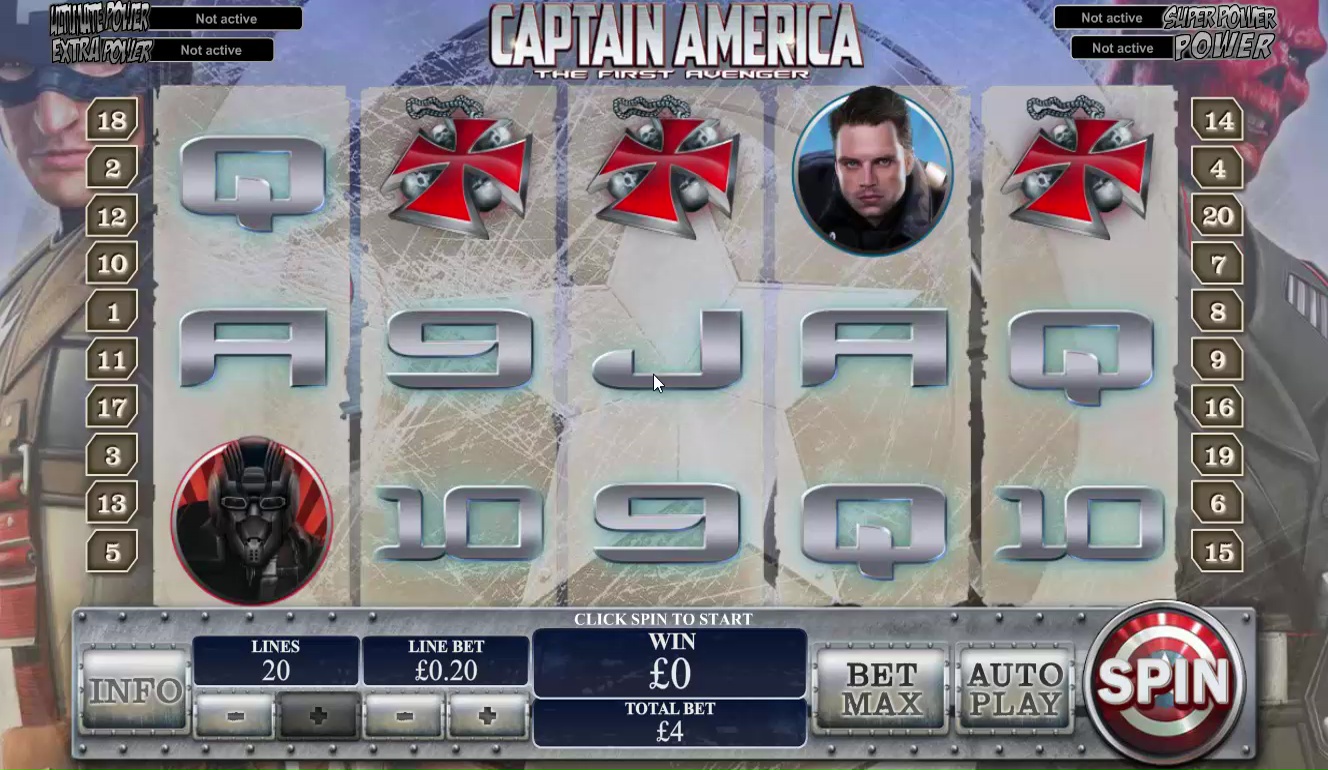 Bet wise, you’re going to find everything you need at the bottom, on the left half of the bar. The number of lines is normally set to 20, but it can be reduced if you find it necessary. The line bet varies in its value, depending on where you want to keep it, the range being $0.01 to $5. The maximum bet which Captain America allows can reach a value of $100.

The famous Captain America comic book, quite popular in the United States, is the focus of this particular slot machine from Playtech. This superhero, a remnant of World War II, which has reached our modern times, he is known for the fact that he has a shield and that it is colored the same way as the American flag is. For the symbols picked for Captain America, you have our hero first of all, along with a Nazi villain, shields for both sides, helpers that are both good and bad, logos and other elements which are split between the two. At the very end, the list concludes with six poker icons, with letters or numbers made out of brushed metal. Quality wise, it’s a game that I enjoyed playing, with the majority of the symbols being very well made, in line with what you’d expect from a high profile game such as this. You get those basic poker cards often enough, and they are disappointing since this is a game that Playtech put plenty of time in, but the rest of the design is excellent.

The game has two different sides, good vs evil, Captain America vs some Nazi villain with a red head and a skull like head. Those two main characters are also the wilds of the game. They can be used to substitute for the symbols which are on the good or the evil side. Each wild has only three regular symbols that it can use its multiplier of 2x on. As a wild though, it works with all of the regular ones. You need five matching wilds on a line to land the big jackpot through them. This type of split, into two different wilds, is OK in this case, since it gives you twice as many chances to get one to help you out. While you are playing in the main game, you can land the Super Energy Free Games, as long as you have certain symbols on precise reels. You need Captain America on reel 1, the Free Games Logo on reel 3 and the Nazi Villain on reel 5. Get all these symbols on the right reels, and you get the free spins. To start off, you get 4 free spins from the game, but then you are asked to pick up to 9 shields from the screen. These will give you additional features. A shield can give you up to 4 extra free spins, up to 12 being possible if you find all of the shields of this type. You can have a multiplier of up to 3x as well, the shields adding a x1 multiplier each. You can get a symbol that will retrigger the free spins when landing on reel 3. There are also shields which will transform the wilds into expanding ones, or which will give you Super Spins. The Super Spins have the main character as an expanding wild on a certain reel, plus additional wilds will be placed on the other reels. 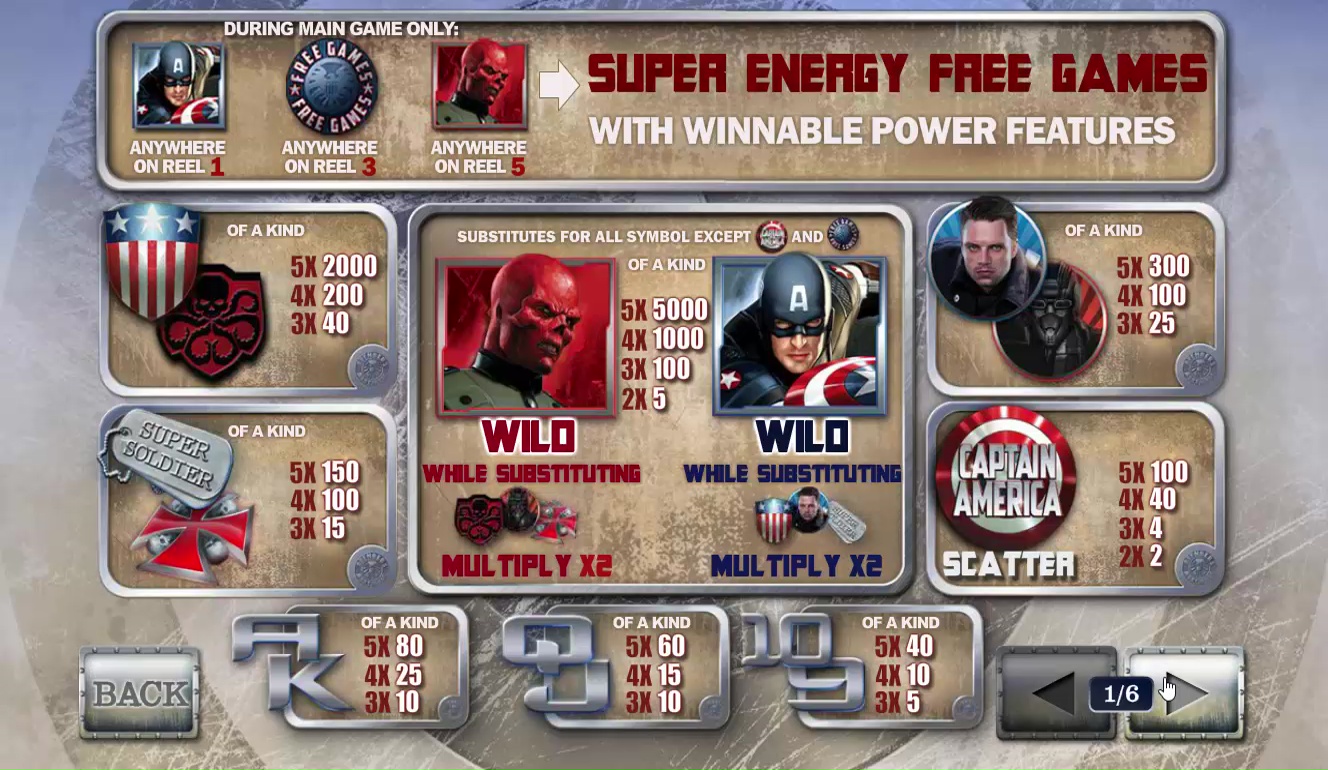 Either of the two wild symbols can form a combo which will pay 5,000 coins, which can mean at most $25,000 cash in Captain America. We know that multipliers of up to 3x are possible during free games, so the amount should be able to get up to $75,000 even. You can add to these fixed prizes the progressive jackpots which are part of all Marvel slot machines, four of them total and winnable at random. The RTP that the game has, which apparently is at 94.31%, seems very low, but I guess that people will play it mostly for its theme.

If you want to try and make money through slot machines, there are better paying games out there, than Captain America. Its RTP is on the low side, but the game is well done and should be enjoyable for the fans of the comic book or the movie. 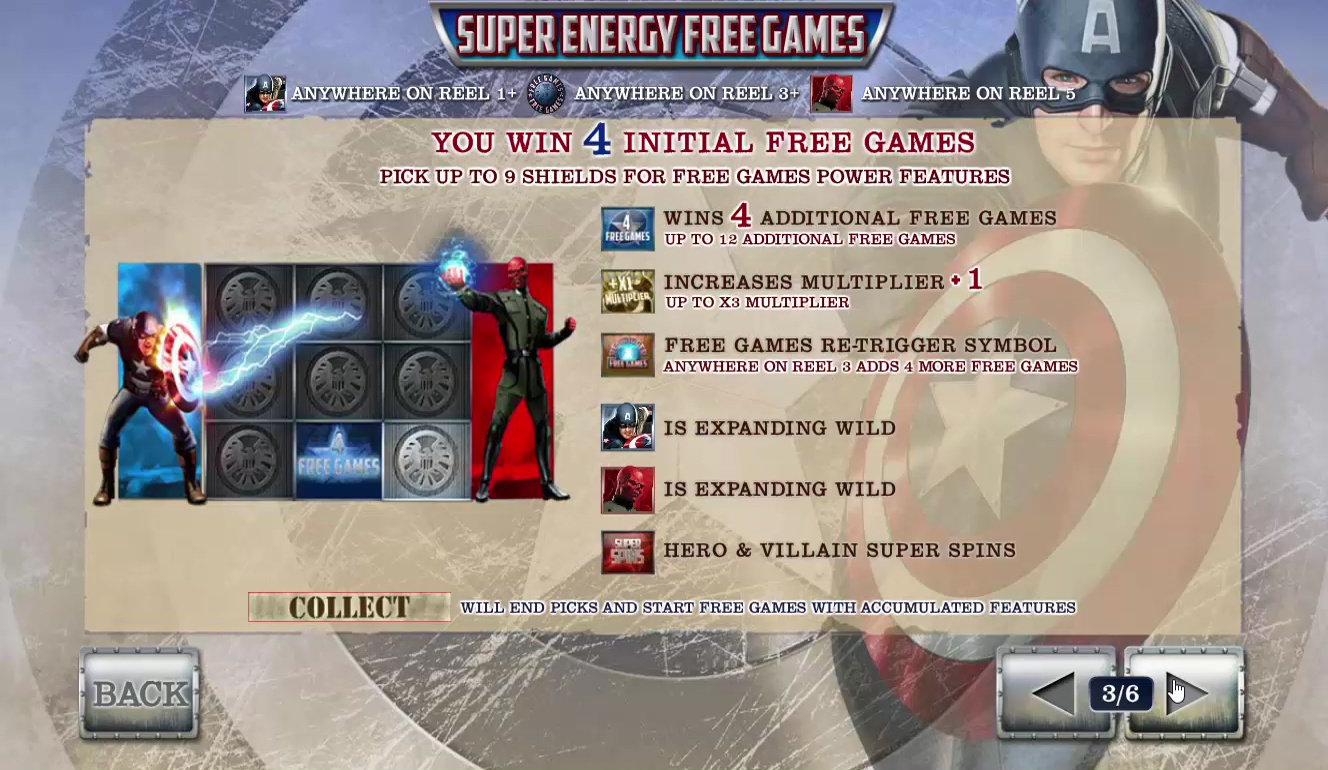