The Blade was created by Playtech and it is one of the many branded titles that they offer, in this case the game being themed around a comic book and movie character, a half mortal/half vampire being that hunts down creatures of the night
Play Blade
6.5Total score
Bonus rounds7.5
Graphics6
Soundtrack6

The Blade was created by Playtech and it is one of the many branded titles that they offer, in this case the game being themed around a comic book and movie character, a half mortal/half vampire being that hunts down creatures of the night. The game is not exactly new, and it doesn’t have the best graphics, but as you will discover there are things to enjoy about it as well. The Blade has 5 reels, as expected, with 20 lines arranged on them, which is just as typical of a number for such a game. You can win up to 25,000x in the game, which is incredible considering its bet size, since it means that the jackpot can get up to $1,250,000. Wild symbols, scatter symbols, bonus games, free games and dynamic multipliers will make sure that you will have a great time playing The Blade. 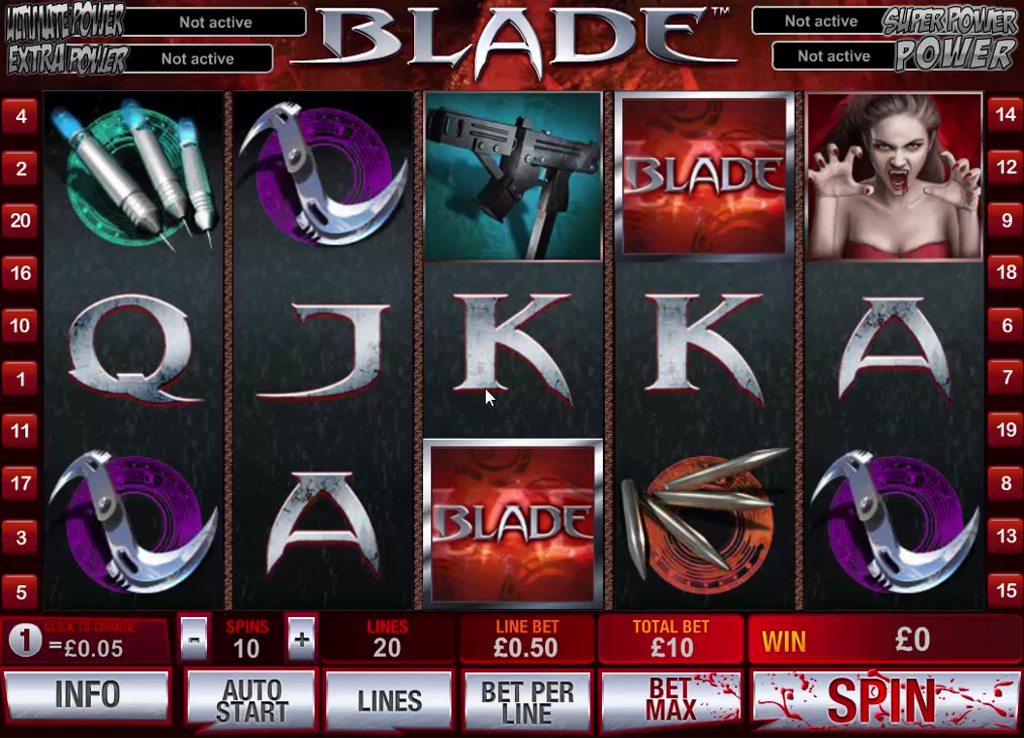 This is the sort of game that caters to all players, no matter what kind of budgets they can use each round. You have minimum bets that can get as low as $0.01 per active line, but there are also options that let you spend as much as $1,000 per round. The line bet can get to a maximum value of $50, where it would use 10 coins of $5 each. The level of customization is high, reaching even the number of active lines, up to 20 being active if the players wants them.

The design suggests that the inspiration for The Blade has come mostly from the comic book with this name, not from the 1998 movie which had Wesley Snipes in the main role. The background image is not very clear on what’s trying to show you, giving you more of an abstract view of fire. On the reels, which are colored in a dark gray, similar to stone maybe, you will find multiple poker cards which seem to be made out of metal, along with images of Blade, of vampires and of the weapons that he uses to kill them wherever he finds them. I wasn’t particularly impressed with the game’s design, but it’s worth noting that this is an older slot machine from Playtech, so the dated look is excusable. If you are a fan of The Blade, there is no other game out there that will be themed around this character and that you can play, so luckily the game isn’t that bad looking that you need to ignore it.

The symbol which is most desirable in this game is the wild, and it’s the same as in other slot machines in that regard. You have a wild symbol with the image of Blade on it, a feature that can be useful in a lot of situations if it lands in the right position to act as a replacement. The two symbols which the wild can’t replace are the bonus and the scatter. It’s also the symbol that can pay the highest prizes in this game, at least the fixed ones, which multiply the line bet by an incredible 25,000x. The downside is that you need six symbols in the combo to get that huge amount, through a feature that I’m going to cover next. The Blade Split feature may be triggered by the symbol that has the logo for it, whenever it will land on a position on reel 5. The split feature will make it possible that you form combinations of up to six symbols, which is the way to get that huge 25,000x jackpot of the wild. The scatter symbol, with the Blade Logo showing, is paying you based on the number of times you see it on the reels. The rewards are at 6x, 66x or 666x total bet, which can mean a very high reward. The same 3 or more symbols will give you a feature with 15 free games, with dynamic multipliers in them. The feature starts with a random multiplier, which can be at 2x, 3x, 4x or 5x. Each round where you get a win will increase the multiplier for the free spins. The Blade Logo scatter gets an additional role, as an extra wild. 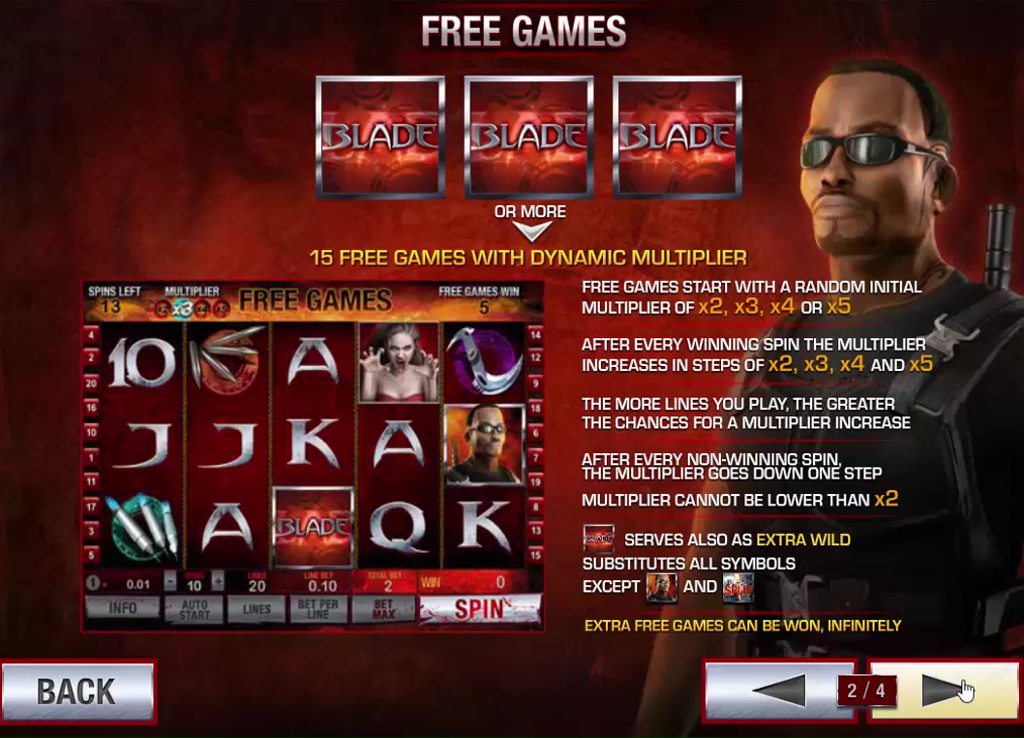 The game has huge top rewards, though it’s not going to be easy to get to them. The regular combinations, which have five symbols, will pay up to 2,500x in the base game. With the Blade Split feature, you can have up to six symbols in combos, and that’s where you can land a prize of up to 25,000x, which can bring you as much as $1,250,000. You can add the usual random progressive jackpots which are offered in all Marvel slots, as an extra incentive to play this slot. The slot’s average RTP is at 95%, which is an OK figure, but not a huge one, as you might expect upon seeing the kind of multipliers and jackpots that are advertised.

The Blade is capable of keeping the player’s attention on it, but it will do it with its features and prizes, not with high quality graphics. Despite the dated look, it feels like a game worth playing. 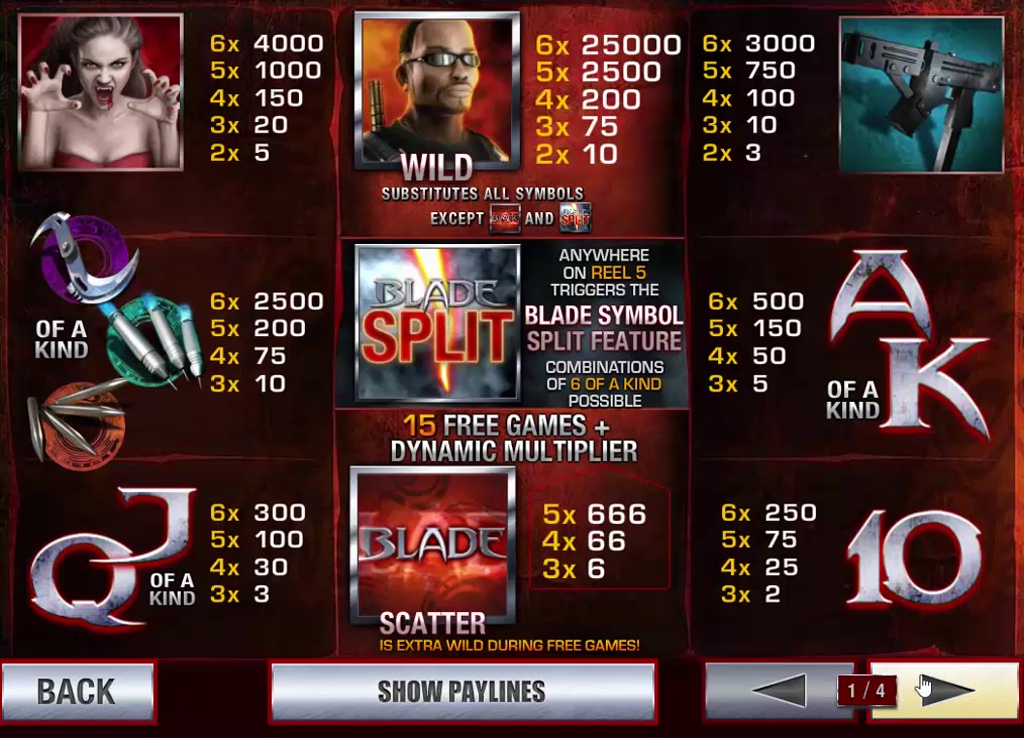