Ace Ventura: Pet Detective is a game that Playtech created based on the popular 1994 film that had the same name. They obtained the rights to create this branded slot machine, and they actually seem to specialize in such titles, based on movies, TV series or comic books. There are 5 reels in Ace Ventura, hosting a total of 243 ways to win, which are obviously always active. You apparently can get paid up to $500 through the regular combinations. The features which the game introduces along the way include a wild symbol, a scatter, as well as animal modifiers which are useful during free spins. 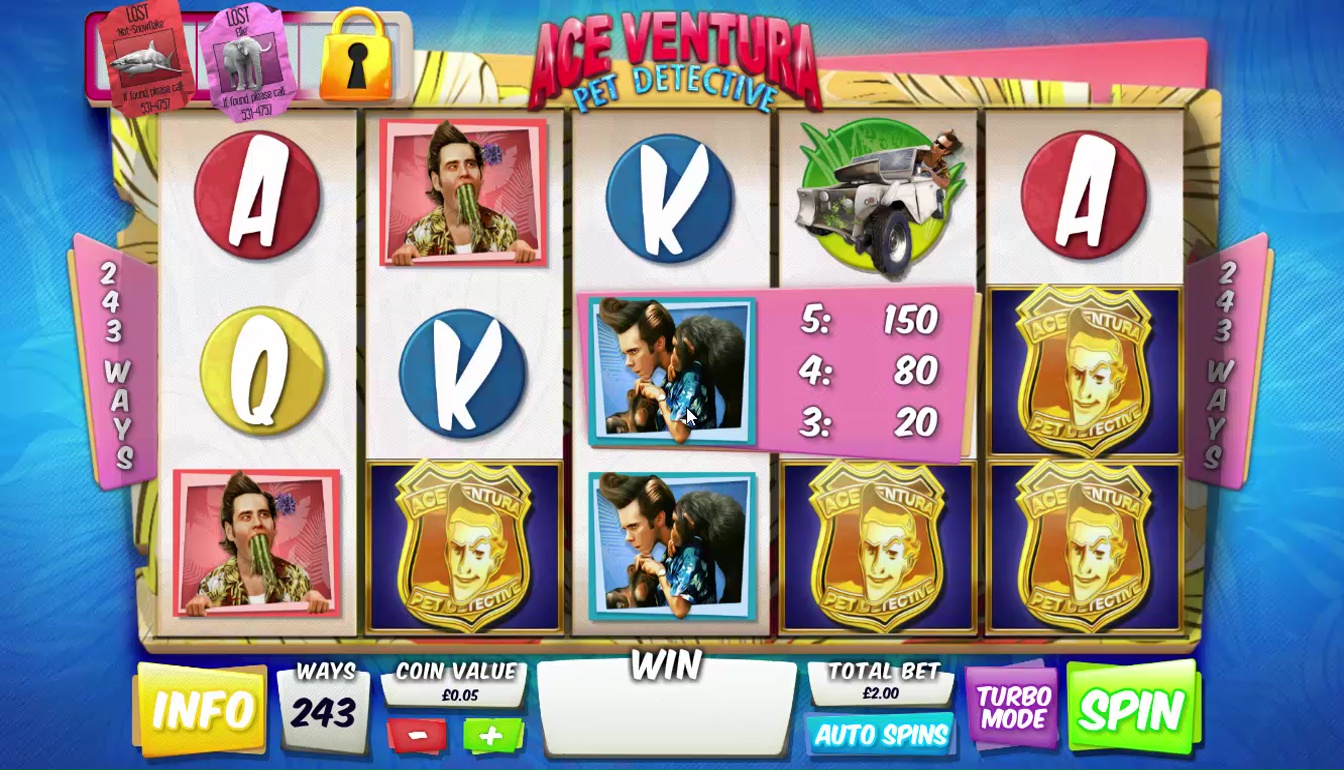 You have 40 coins that you need to use in every single bet that you go through. You pick only what their coin value should be, the range being between $0.01 and $2.50. Your bets will have values of $0.40 to $100 this way, and whatever that number may be, it will cover all those ways to win. I didn’t like that the game requires 40 coins for this, even though slots with 243 ways to win usually need only 25 or 30 coins.

Ace Ventura, the character, was played by Jim Carrey in the movie, and the slot machine does include the image of this actor on the reels, in more than one symbol. They clearly obtained the rights to use his image, so this seems to be a major project for them. The movie, released in 1994, was a comedy that proved highly popular, and it was followed by a couple of sequels. The game uses real photos of objects and of the main character, some of them modified a bit for the PC screen, but still recognizable as photos. Things like badges, poker cards, images of Ace Ventura in cars, as well as a rhino bonus, are visible on the reels as you play. I think that the graphics are enjoyable and well made for the most part, so those that liked the film shouldn’t be disappointed with the slot machine. The images are a mix, some looking quite real, others being more cartoonish. It’s the case with the poker cards especially, which look like they were inspired by comic book style graphics.

One of the symbols that show us Ace Ventura is going to be the wild in the game (the one where he shows his business card). You can use this particular symbol to substitute for any other icon in the game, and since you’re playing a slot with ways to win, the symbols only need to appear on neighboring reels, not in any particular spots on them. The symbols which act as modifiers or scatters can’t be replaced with wilds. If you look at the top left corner, you will notice the animal modifiers, which are going to be useful during the free games. The animal modifiers can be collected as you play the game, and changed. You can have two animal modifiers active, and they can be different from one free spins session to the next. To trigger free spins, you need the Bonus Rhino visible on the reels 1, 3 and 5. It will give you 7 free spins, with the animal modifiers used as extras. The Shark is one modifier, which will give you additional free games. Another one is the Elephant, which has expanded reels for you. The Gorilla will upgrade symbols. The Bat adds random wilds to the reels. The Pigeon will have a wild multiplier on reel 3. Finally, the Dolphin will give you a mystery win multiplier. You can have two modifiers active during free spins, and it can be any two from those I just mentioned. Your free spins experience can be quite different from one trigger to the next, thanks to these modifiers. Besides all the features that I already mentioned, there are also in-reel features, which may be activated at random. You can get from the game Jungle Friends (extra wilds), Loser (wild stacks added) or Sneaky Walk (respins with increasing multipliers, continuing until you have a win) features. 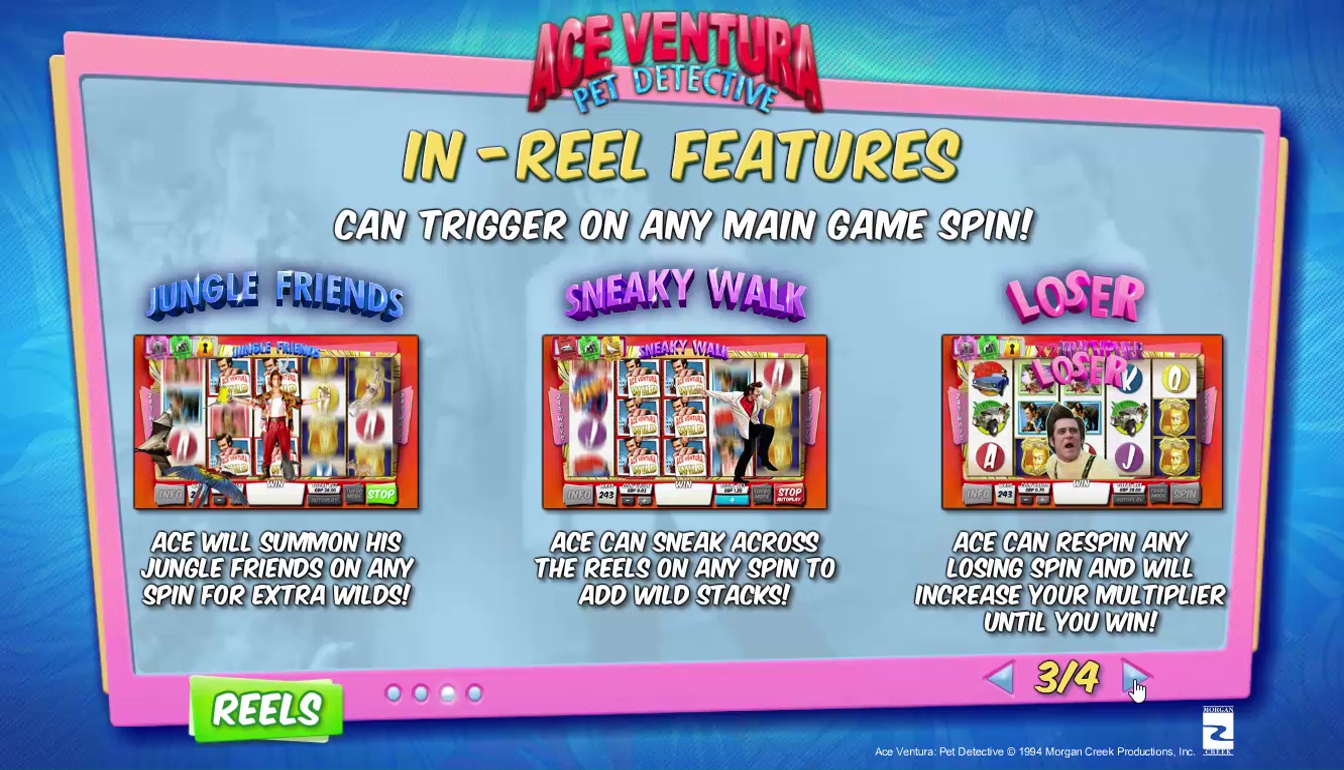 On the surface, it doesn’t look that impressive payout wise, at least if you consider only the value of the top jackpot. Those 200 coins will have a top value of only $500, which is not a lot obviously. However, even though the individual rewards seem small, the slot does have its various features to improve your winnings as you play, so in the end you still have a slot machine with an average payout of over 96%, so it’s a slot worth trying out because of that.

It’s not the best game out there, but it has its own dedicated player base, in the people that saw the movies or are simply fans of Jim Carrey. It pays well enough in the long run, so that’s not something that should deter you from playing it. 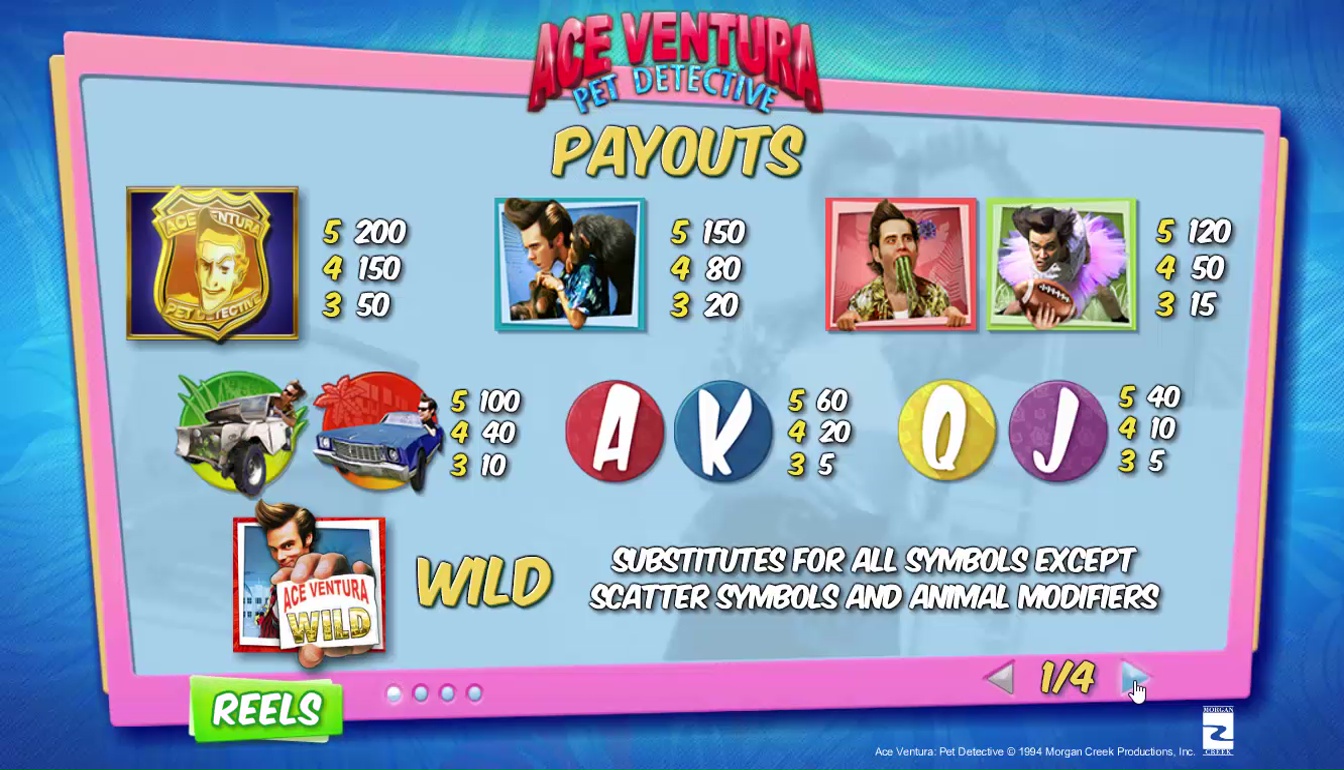