Tomb Raider is a slot machine which was created based on a character that first appeared in a video game in 1996, and since then it has been present in a lot of different movies and video games. The heroine of this series is Lara Croft, a female archaeologist and adventurer. There was a second slot machine launched in this series as well, so we’re looking at an older game from Microgaming. You are playing here a slot machine which has 5 reels and 15 lines active at most. It appears to be capable of paying up to $187,500 during its base game rounds and triple that amount during the free spins. Those are not the only parts about it that I’d call impressive. There are also the free spins, scatter symbols, multipliers, wilds and bonus games that you can get from it along the way. 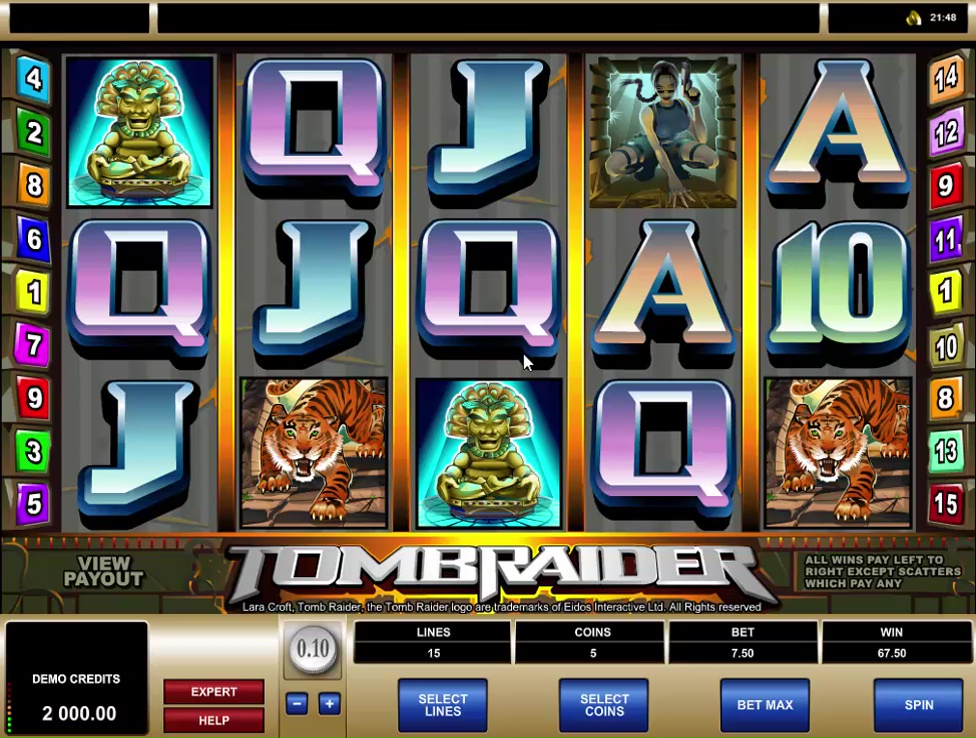 Lara Croft, from the Tomb Raider franchise, is the heroine of this particular slot machine. You can see her in one of the major symbols which are used, as well as in one of the regular ones. Since she is an archaeologist that finds treasures, she is shown in the same kind of environment as Indiana Jones, in the jungle and looking for a gold idol left behind by a long lost civilization. On the reels of this game you will encounter images of tigers, of temples and idols, but unfortunately there will be poker icons as well. The graphics are dated, at least if you compare the game with the second slot machine of the series. It seems to be based on an older video game, one of the many that came out in the series, perhaps even one from the 90s or early 2000s. You don’t have much of a background here, the reels occupying pretty much the entire screen.

The easiest feature to explain in Tomb Raider is the one that gives you the wild. It actually uses the game logo, so it’s easy to spot when it appears. During most spins where it does something for you, it does it as a substitute, and only if the rest of the requirement for a new combo is met. Sometimes though, you will get multiple wilds on a line, starting from the left, and that’s when you get the best rewards of the slot. Up to 7,500x is offered for such a combination. Neither the scatter nor the bonus symbols can be replaced by a wild symbol. Next, we should take a look at the image where you see Lara Croft holding two handguns. That is the scatter symbol that can get you into the free spins mode. Having that symbol appear 2 to 5 times anywhere as long as it is visible, will get you rewards which are at 2x, 4x, 50x or 400x what the bet was set to. Should you get that same scattered Lara symbol in a minimum of three positions, then in addition to the cash reward you can also expect 10 free spins, where 3x multipliers are used for all your wins. Retriggering the free spins is a possibility as well, provided that you get another set of 3+ Lara scatters. The Bonus Idol is the third feature symbol that you can get on the reels. These are not scatters, so they are needed to appear three or more times on an active line. If you meet these requirements, then you are taken to a new screen, where there will be a number of idols to choose from. You get 3 to 5 choices there, with rewards going up to 500x from each one, while the minimum is at 12x. 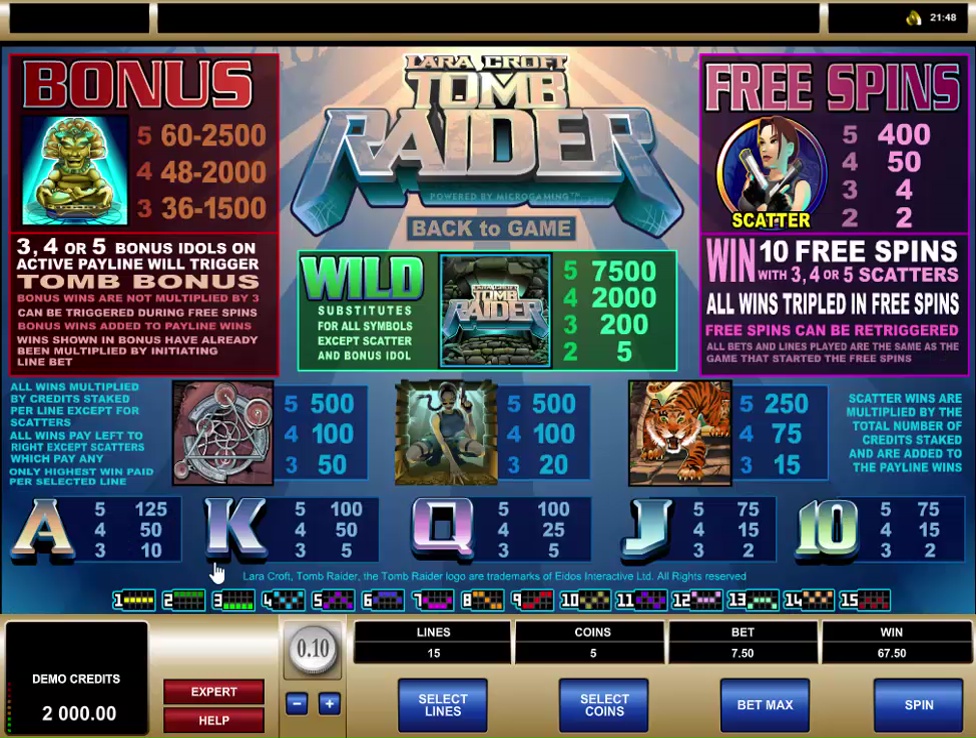 The obvious top payout in Tomb Raider is offered via the game logo, the wild, and it reaches a value of 7,500x, so up to 37,500 coins, or $187,500 cash. Since 3x multipliers are available during free spins, the jackpot value can jump to $562,500. The RTP is at an average that’s somewhat lower than that from other Microgaming titles, especially newer ones. It’s at 95%, which is OK, but it doesn’t make this a must play slot.

You should play Tomb Raider if you don’t mind the older looking graphics, and you just want a game with an earlier version of Lara Croft and with huge jackpots to go after.