Terminator II is a game that’s based on the popular 1991 film, Terminator 2: Judgement Day. The Terminator series has been quite popular over the years, and having a slot machine based on one of its movies is a good move on Microgaming’s part. For a setup of 5x3 reels, having 243 ways to win instead of lines is a practice that seems to be gaining ground in recent years. It’s what Terminator II offers as well, along with a chance to win a prize with a value of up to $15,000. In addition to the symbols with scatter and wild abilities, there will be free spins and a special game mode, called T-800 Vision. 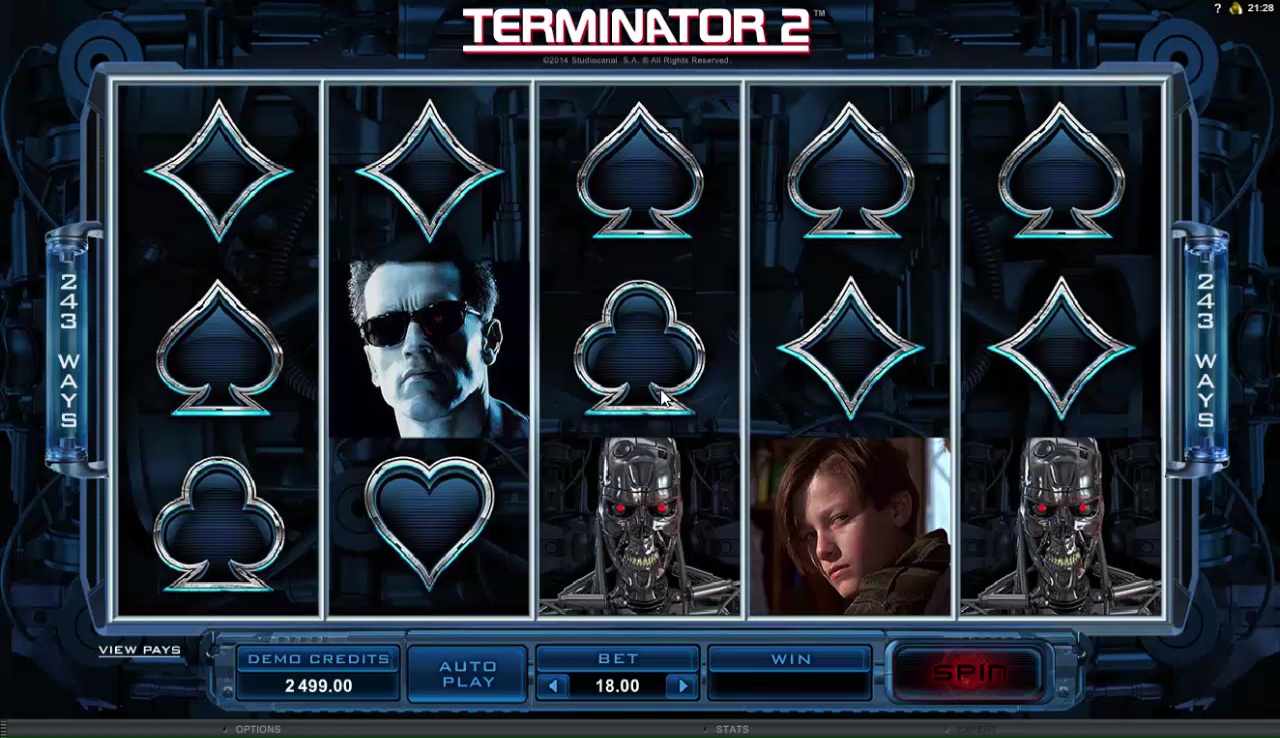 You will have to cover 30 fixed lines with your bets each round, a number that Microgaming deems sufficient to cover the 243 ways to win that are actually used. You’re going to select between 1 and 10 coins to be used for each of those 30 lines, where their values are between $0.01 and $0.50. The player is free to use a wager as small as $0.30, or to have as much as $150 invested in a single spin of those five reels.

The basis for this slot machine comes from a film that was released in 1991, called Terminator 2: Judgement Day. It was obviously the second Terminator movie to be released, the first one coming out in 1984. The action revolved around killer robots that were sent from the future, to kill or protect (depending on the side they were on) a human from our times that will grow up to be a leader of the resistance in a fight against robots. It was a hugely popular film in its time. For the slot machine that was created based on Terminator 2, you will find that the developers received permission to use images of all the major actors from the film. Among the more important symbols you will find images of actors like Arnold Schwarzenegger, Robert Patrick or Linda Hamilton, but also those of the killer robot that was sent from the future. Once you get past the symbols with photos of actors in them, you end up with a couple of logos and with the four card suits. I wouldn’t call Terminator II some great masterpiece. The design follows in part the look of the film from the early 90s, and it just adds some non-related symbols to those with the photos. In the background they just used an image with machinery, though kept in the dark so you don’t understand much from it.

A T2 logo, with a background made out of fire behind it, is selected in this case as a substitute that is capable of forming combinations together with any of the regular symbols. As in all slots which rely on ways to win, the wild is needed on a certain reel, but not on a fixed position, so it tends to be of more use to you. It’s also capable of paying directly, forming its own combos and offering up to $7,500, depending on the wager. Wild symbols will only be replacements for regular symbols, not for the feature triggers. With a Scatter Logo on the reels, with at least two positions occupied, you will be offered a cash prize. If you happen to land at least three such symbols, the cash rewards will be accompanied by a feature with 10 free spins. The reels will be taller during the free spins, with four symbols on each column. The number of ways to win jumps to 1024, thanks to this. At the same time, the free spins also have a symbol which will transform into any of the others, in order to get you a win as high as possible. It’s the symbol with the shape shifting robot that gets the honor. The list of features sounds pretty good already, but it doesn’t stop there. There is also the T-800 Vision feature, which will be activated at random. If you get even a single Scatter Logo during that spin where the mode is active, it will be enough to trigger the free spins. There is a cash prize associated with it as well, offered for the symbols with characters/robots on them that are visible. 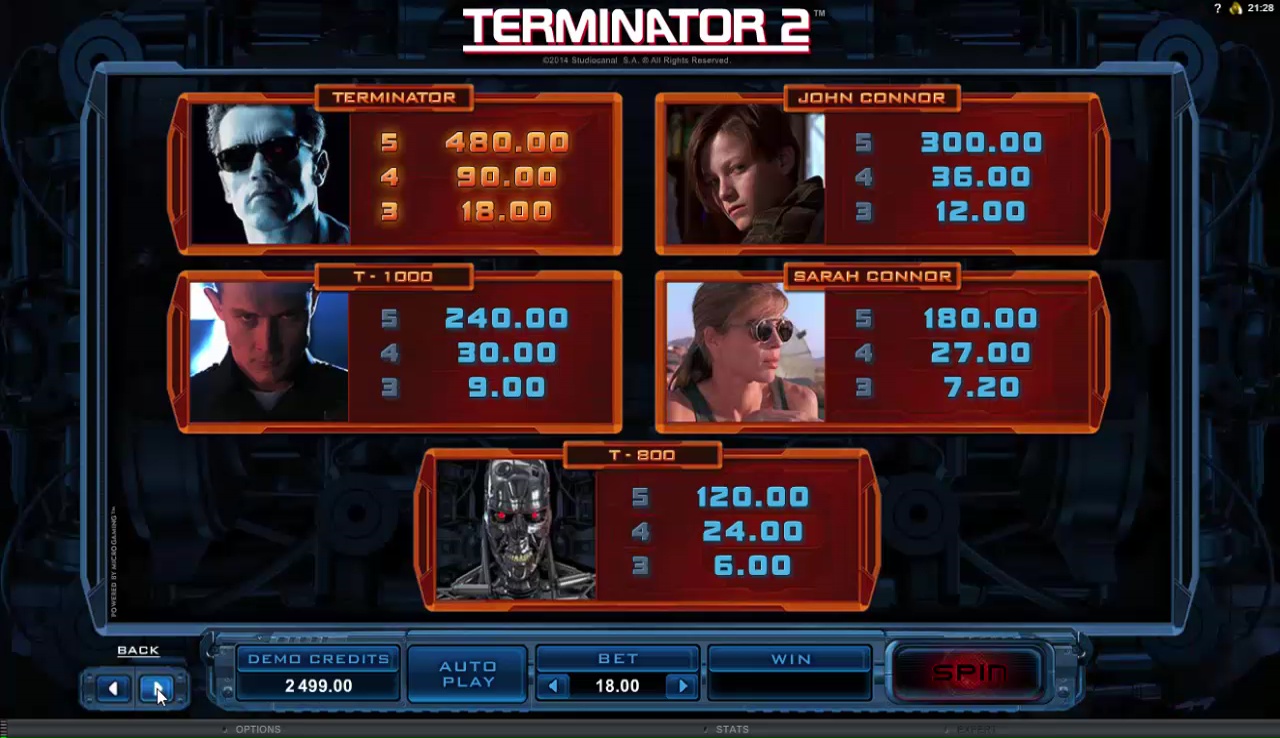 By the looks of it, the best prize you can hope for will be offered by five scatter symbols, right before they get you the free spins. You can win up to $15,000 thanks to them. I’m not sure what the average RTP you will get from Terminator II, but I expect it to be a decent one, same as in the rest of the slots which Microgaming has designed so far.

Terminator II doesn’t have the design of a modern slot machine, but it has the right features and if you loved the original movies, I’m sure you will appreciate the effort that went into it. 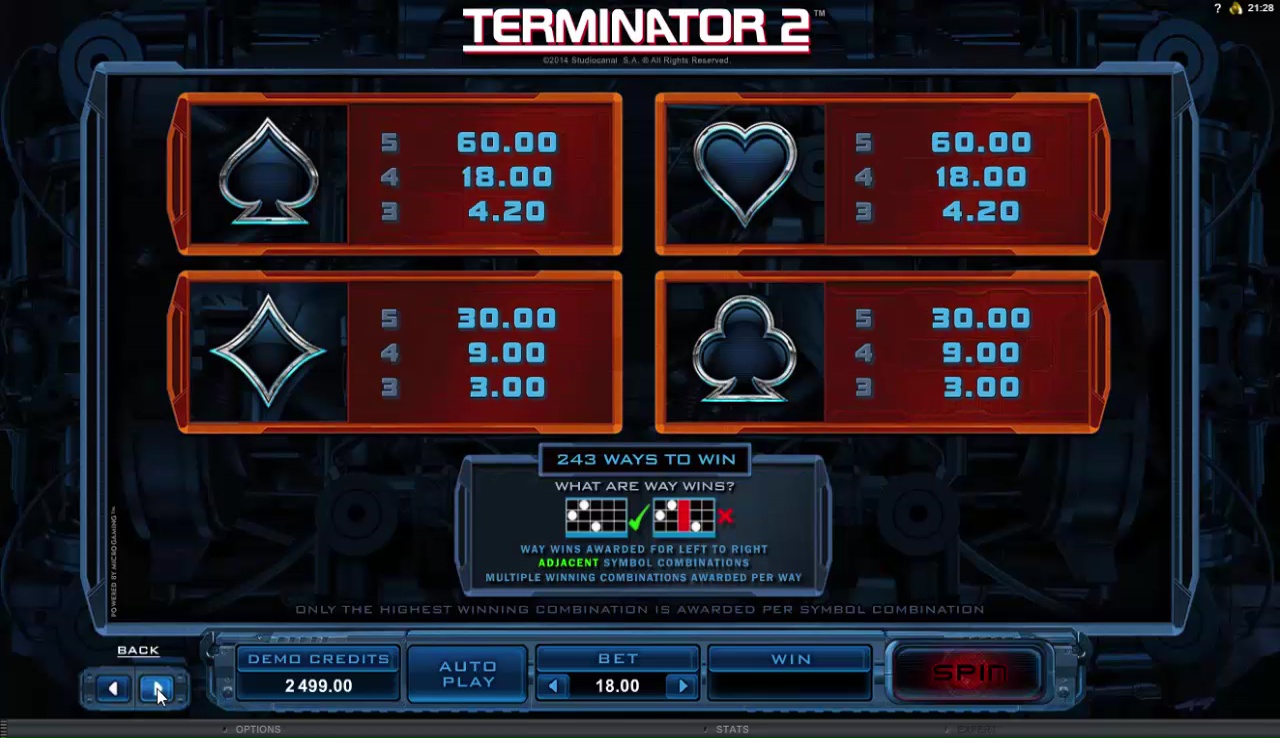