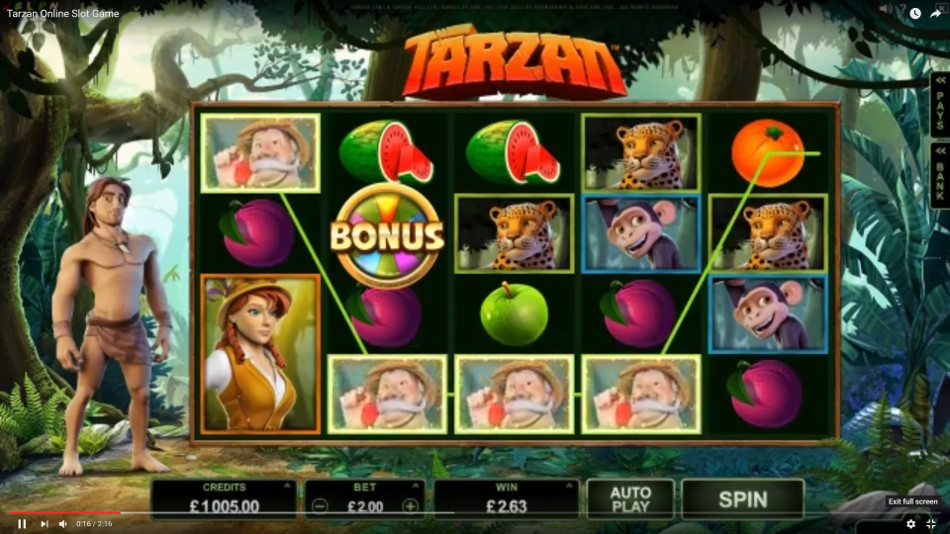 Tarzan is one of the games that Microgaming has launched in 2016, a title that builds on the popularity of the character with the same name. Tarzan first appeared in a novel, in 1914, which was written by Edgar Rice Burroughs and which was called Tarzan of the Apes. The present game gives us the Tarzan character, looking indeed like someone that was raised by apes in the jungle, but there are also characters like Jane or an elderly gentleman. For this game, a total of 40 lines are going to be fixed each round. With help from certain symbols, rewards of $20,000 are possible, along with a bonus game jackpot that gets up to $200,000. As for those features, they have for you scatter symbols, bonus wheels, free spins, bonus games and a stacked wild.

You will find no option to change how many win lines are used during your spins, but you do pick the number of coins and their value. You have line bets which reach values of $5, by using up to 10 coins with values of $0.50 or lower. Since 40 lines are used, the full betting range is between $0.40 and $200, with 40 to 400 coins used.

The story of Tarzan is one of the most popular ones today, and I doubt there are many that don’t know it. Whether they read the original novel, or maybe one of the twenty five sequels published by the author, or if they simply saw a movie, a cartoon, a TV series or a comic book, chances are that people will know about the boy that was raised by apes. The slot machine market is just one more medium in which we get to see him and Jane. For this game, the developer got the official license for Tarzan. Microgaming placed the action for the game in the middle of a jungle in Africa, just like it was in the novel. A couple of other civilized humans are also present on the reels, in the form of Jane and an older guy. Additional symbols are with leopards, monkeys, birds, a couple of logos and fruits which don’t belong in the jungle (watermelon, apples, plums and oranges).

First on the list of symbols that I want to see as often as possible is the stacked wild. You have the Tarzan logo showing on it, and it will cover one or more positions on the reel when it lands. It’s available during paid and free spins alike, and thanks to its nature it could provide you with a lot of wins at the same time, each one paying up to $4,000. In theory, five fully visible stacked wilds can get you 40 wins and a total of $160,000 cash. As expected, this is going to be a substitute as well, the role in which you’re going to see it most often. Another feature that I suggest you check out is the Bonus Wheel. It has its own symbol that will trigger it, a scatter symbol which will pay up to $20,000 (100x total bet). The feature that gets triggered is offered as an extra, on top of the cash prize, when you get 3+ symbols. The Bonus Wheel spins for you next, giving you one of the following rewards: jackpot of 1,000x total bet, free spins, cash prizes or bonus game. The one you really want is that jackpot obviously, since its value can get up to $200,000. Should you get the 12 free spins instead, know that they’re pretty interesting as well. They come with both Rolling Reels and Growing Wilds for their extra features. The Rolling Reels give you multiple consecutive wins during the same spin, by removing symbols which form wins and bringing new ones in. The growing wilds add additional symbols to the existing stacks of wilds, increasing the odds of getting them to appear. Stacks of up to 15 wilds are going to be used here. The final possible feature to get from the Bonus Wheel is called Pick-a-Potamus. It’s just a simple bonus game, where you’re taken to a new screen, with hippos sitting in a lake shown there. Pick as many as 12 hippos, and get prizes from them. Finding the Pop message ends the feature.

The biggest prize that you can take home will come via the Bonus Wheel, and it will be at 1,000x total bet. For this game, that can mean a jackpot of $200,000. A few other situations are possible, with rewards that could reach $160,000 thanks to the wilds.

Microgaming managed to do a good job here, and that’s true both of the graphics and the various features they included. There are plenty of things to do and trigger inside, so you’re not going to be bored too quickly.