Sweet Harvest is a farming themed game from Microgaming, dedicated to the harvest season, as you might imagine. The images you’re shown are those of the plentiful harvest, of the green fields that the farmers work on, but also of the farmers themselves. In Sweet Harvest, the action will take place on 5 reels, 3 symbols on each one, as well as up to 20 active lines. You’re going after top payouts of up to $20,000, and you’re also going to benefit from the presence of wild symbols (regular and stacked), scatters, multipliers and free spins.
Play Sweet Harvest
7.5Total score
Bonus rounds8.5
Graphics6
Soundtrack8

Sweet Harvest is a farming themed game from Microgaming, dedicated to the harvest season, as you might imagine. The images you’re shown are those of the plentiful harvest, of the green fields that the farmers work on, but also of the farmers themselves. In Sweet Harvest, the action will take place on 5 reels, 3 symbols on each one, as well as up to 20 active lines. You’re going after top payouts of up to $20,000, and you’re also going to benefit from the presence of wild symbols (regular and stacked), scatters, multipliers and free spins. 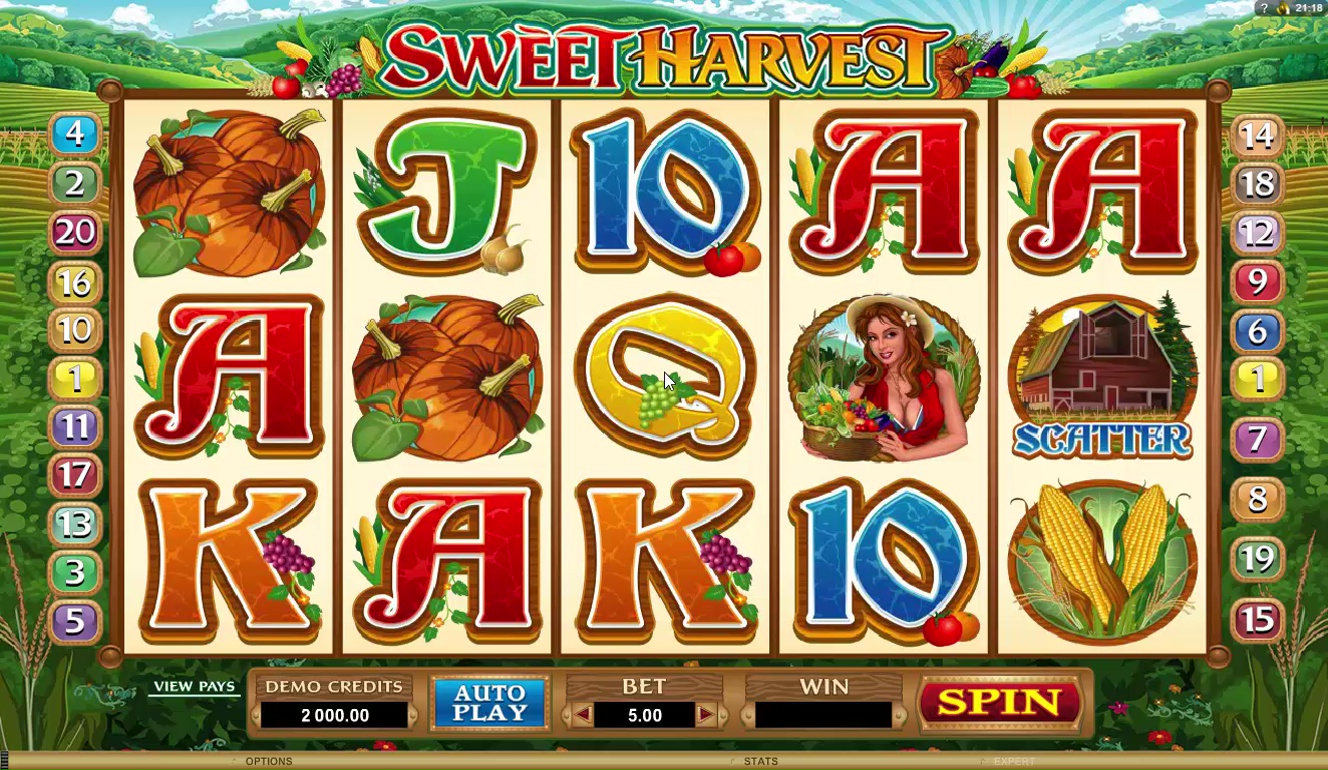 As always, you get to make a couple of decisions when you’re playing a slot machine. With Sweet Harvest, you are asked to pick the number of lines that will be active each round, as well as the number of coins and their value. You may use a maximum of 5 coins per active win line, with the denomination being between $0.01 and $1. Depending on your choices, you can wager between $0.01 and $5 per line, and go up to $100 with the total.

The entire action of this game revolves around the time of the harvest and around the delicious foods that come from the earth. The main characters are a male and female farmer, both of them young and attractive, an element that’s not usually expected from this kind of game. I enjoyed the quality of the graphics overall, and a lot of that comes from the image in the background, where you see fields that are cultivated by people, the place where the bountiful harvest originates from. The choice of symbols makes sense for the most part, though they did use Royals for the lesser ones. The list starts with the image of a barn, with the logo of the game, with a basket filled with produce, the female and the male farmers, pumpkins and corn. The last five are the ones showing you the images of Royal cards, from 10 to A and accompanied by fruits and vegetables, so they’re somewhat related to the topic. All in all, I think that Sweet Harvest has a lot to offer visually. I’ve seen enough farm themed games so far, to be able to tell you that this is one of the better looking ones that you will find.

You’re looking at the wild symbol if you get the logo of Sweet Harvest to land on the reels. As the wild feature, this logo can be combined with regular symbols so that you form new combinations and bring you new prizes. The wild either makes a combination possible, or improves an existing one by adding a symbol to it. Wilds don’t have to appear next to regular symbols in order to be of use to you though. Ideally, you will get three or more logo wilds together, and they will form a combination that can pay up to $10,000. When used as replacement symbols, wilds can’t help you out with the bonus or scatter symbols, only with regulars. The Harvest feature is going to be activated whenever you have the required symbol on the 2nd or 4th reel. You need just one symbol, which will have a basket filled with produce as its image. A random prize is going to be awarded if you get that one symbol to appear. The other scatter symbol, which has as its image the Red Barn, is going to pay even more than the wild does, at least in the base game rounds. The scattered Red Barn, when visible in a minimum of two locations, will bring you some kind of cash reward. You can get back the amount you wagered, at a multiple of 1x to 150x, based on the number of symbols that are visible at that time. Besides getting a good payout out of the Red Barn scatter, it’s also going to be a way for you to access the free spins. Should you get 3+ Red Barns in view, the game will trigger 12 free spins. These are better than the rounds that you actually pay for, since they will have two extra wild symbols. The two young farmers, the male and the female, will be those extra wilds and they may appear stacked if you’re lucky. They can also bring you a 2x multiplier, if they are next to each other on a winning line. If you happen to get the Red Barn on the reels 1 and 2, then those reels will be held, while the other three reels will respin, to give you an extra chance to trigger the free games. 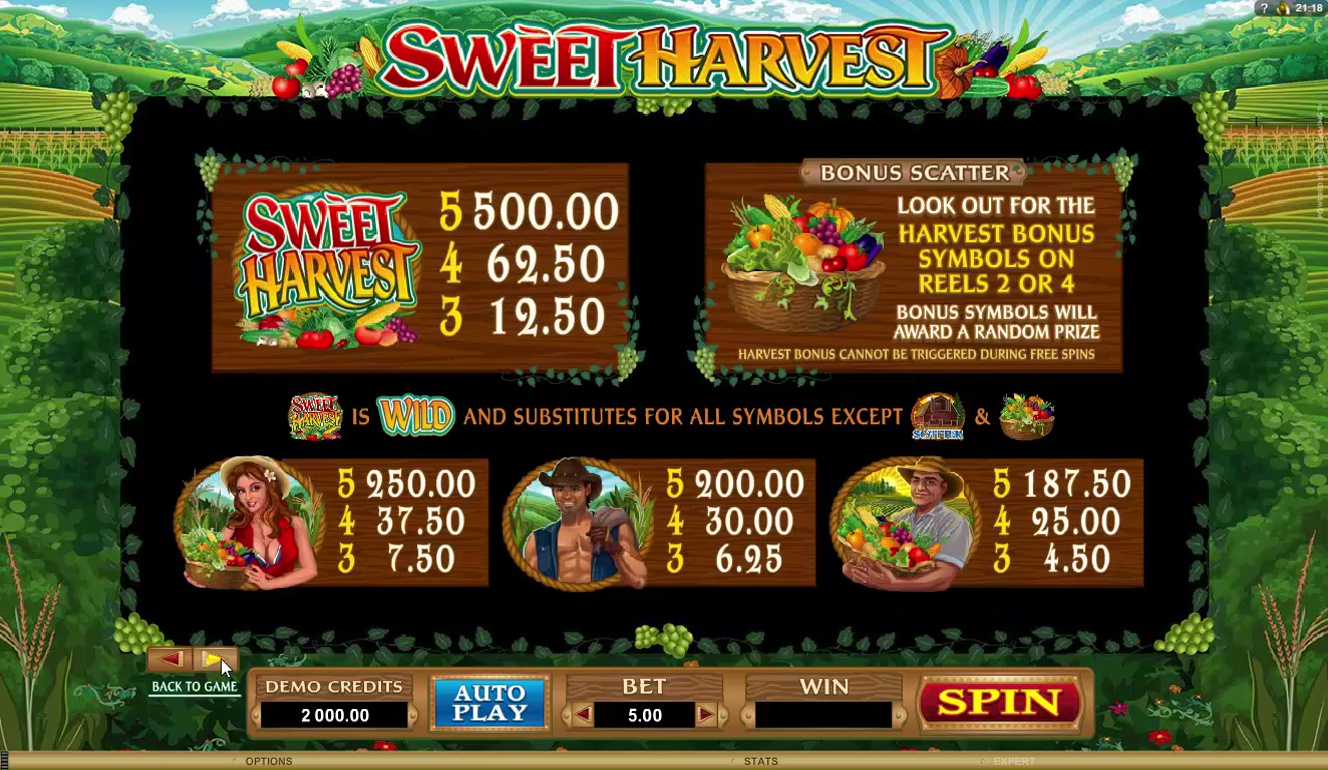 The big prize of the base game will come via the scatter, which will pay up to $15,000, right before it triggers the free spins. The wild pays at most $10,000 during paid spins, and up to $20,000 during free spins, provided that certain multipliers are used. The 96.29% average Return to Player of Sweet Harvest is going to look pretty good, no matter next to what other game you place it.

Sweet Harvest is not a terribly unique title if you just look at its theme, but the graphics quality is high and there is a longer than average list of features that is offered, so overall I’m quite satisfied with it. 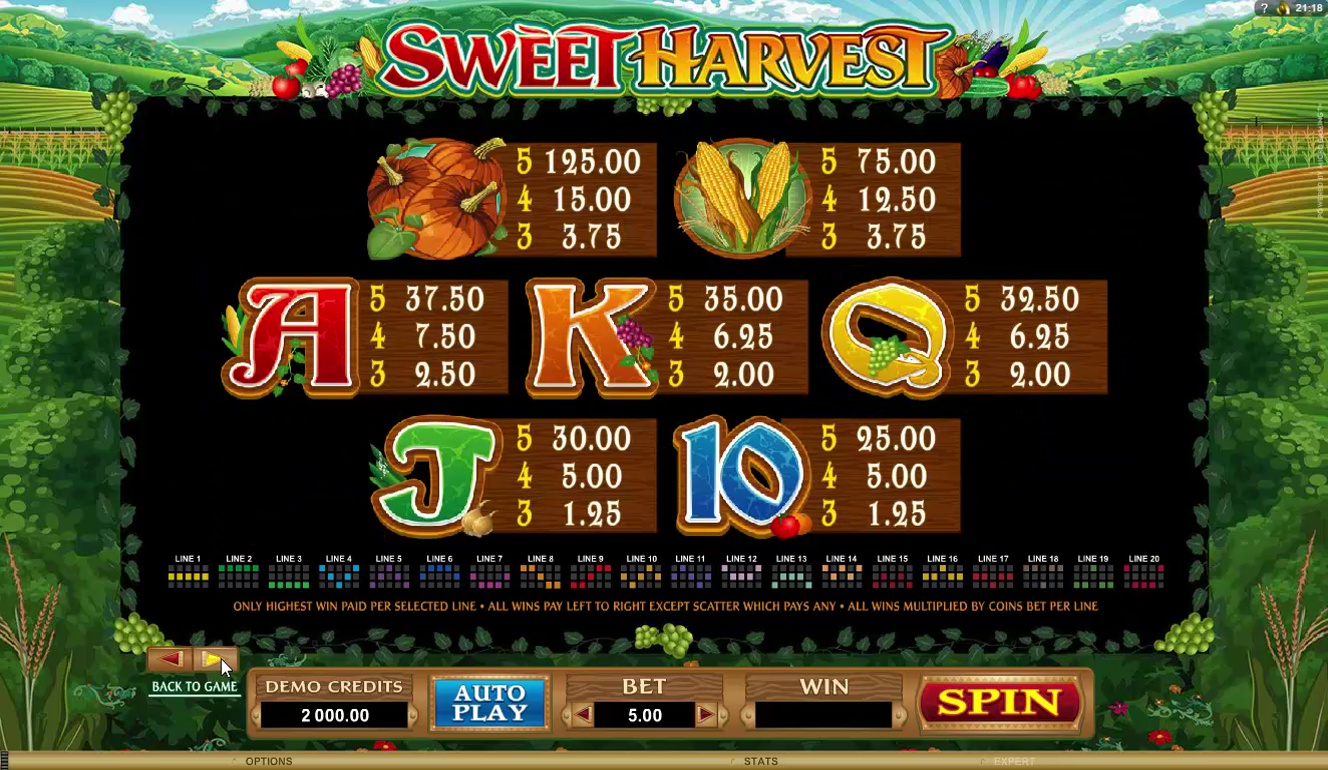