River of Riches is a game that’s taking us to Ancient Egypt, and then it shows us the inside of a pyramid, with its beautifully decorated walls. The game doesn’t give you a theme that you can’t find somewhere else, in just a good of a design, so it comes down to its features to convince us to play it. Up to 25 lines can be activated, and their combinations will form on the 5 reels offered in the game, paying as much as $2,500. There are the usual features as well to consider, symbols with scatter or wild abilities, the former being used to trigger free spins. 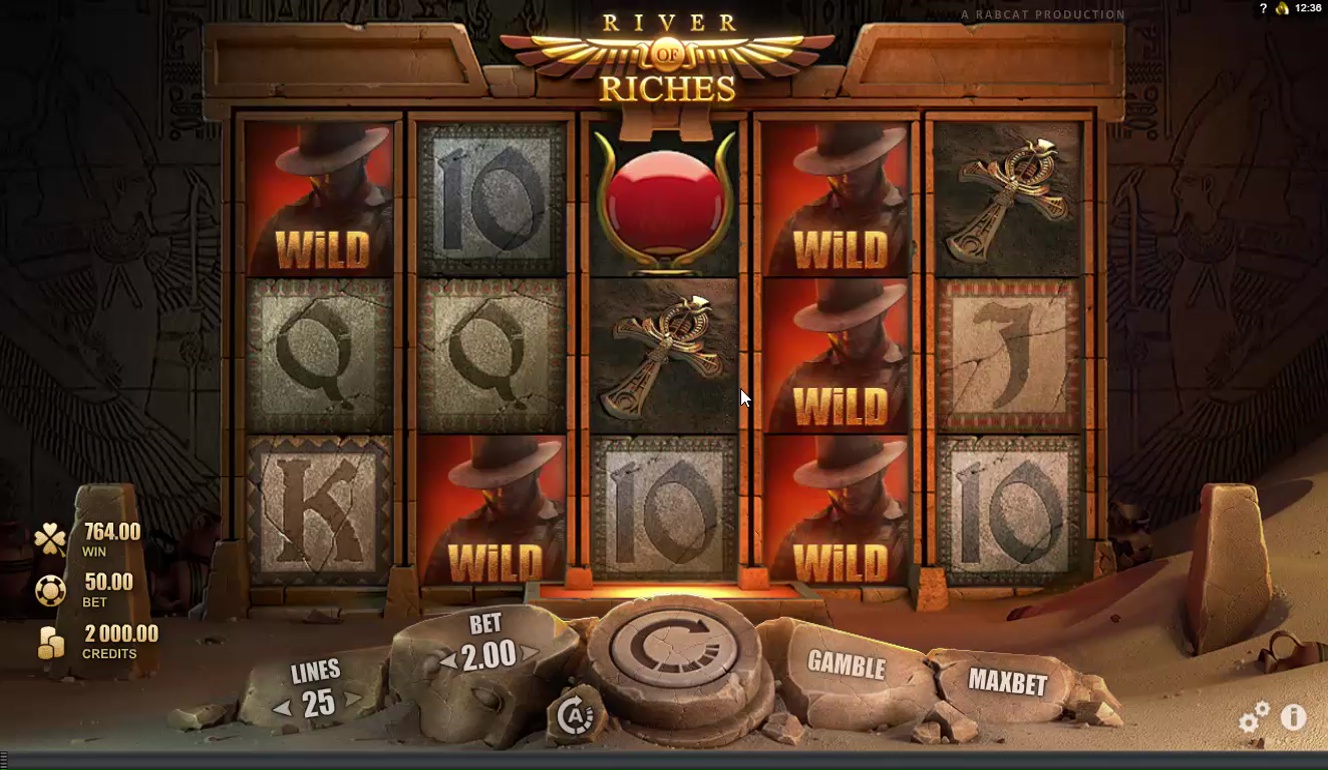 It’s a simpler betting system than in most games, but it still allows you to select things like the number of lines or the stake per line. Your stakes vary in value between $0.01 and $2, for each of the 25 lines that you can activate. The complete betting range in place in River of Riches starts from $0.01 and can go up to $50.

The inspiration for a lot of slot machines released so far has come from Ancient Egypt, and I can only assume that people enjoy them, or they wouldn’t be so popular. River of Riches does the same thing as many other slot machines, offering a story where adventurers in our times are looking at the things that the Egyptians left behind. The rest of the symbols chosen for the game are either of Royals imprinted on stone slabs, or of objects that can be found in pretty much all slots of this type. You’re going to find the Ankh cross in there, the scarab, the pharaoh and the pyramids. In regards to the graphics quality, River of Riches does an excellent job at making the experience pleasant for its players, but since there are so many games with the same theme, it doesn’t quite manage to be a top contender in its space. Quality wise, the game is good and you can expect an enjoyable experience from it.

For the features of River of Riches, you will find that there are a couple of symbols that will take on the task of making the action more exciting for the game’s players. The scatter symbol is among those, and it’s going to show you a red orb, placed on top of a staff by the looks of it, an image that represents Isis. Rewards can come your way when you’re landing two or more Isis symbols scattered in the game. Cash rewards will vary in value between 2x and 50x the wager of the round. The symbols don’t have to appear in fixed positions, they just need to be present enough times anywhere on the reels. In addition to the usual cash prizes, the scatter also acts as a feature trigger, which is another very common role for it. It’s going to be your way of triggering 10 free spins, the requirement being that you have at least three Isis icons anywhere on the reels. Between one and four fixed wild symbols are present on the reels during these spins, sticky for the entire duration. The game has its own wild symbols as well, which you can use just as a way of forming more combinations, since it will act as a substitute. The symbol doesn’t seem to be capable of forming combinations directly, and it also can’t be used to replace a scatter or a jackpot icon. It’s obviously not a very exciting feature. Overall, I can’t say that I’m happy with the offer that River of Riches makes in terms of features. I know what the other games that are present in this category can offer, and it’s a lot more than what River of Riches has for us. 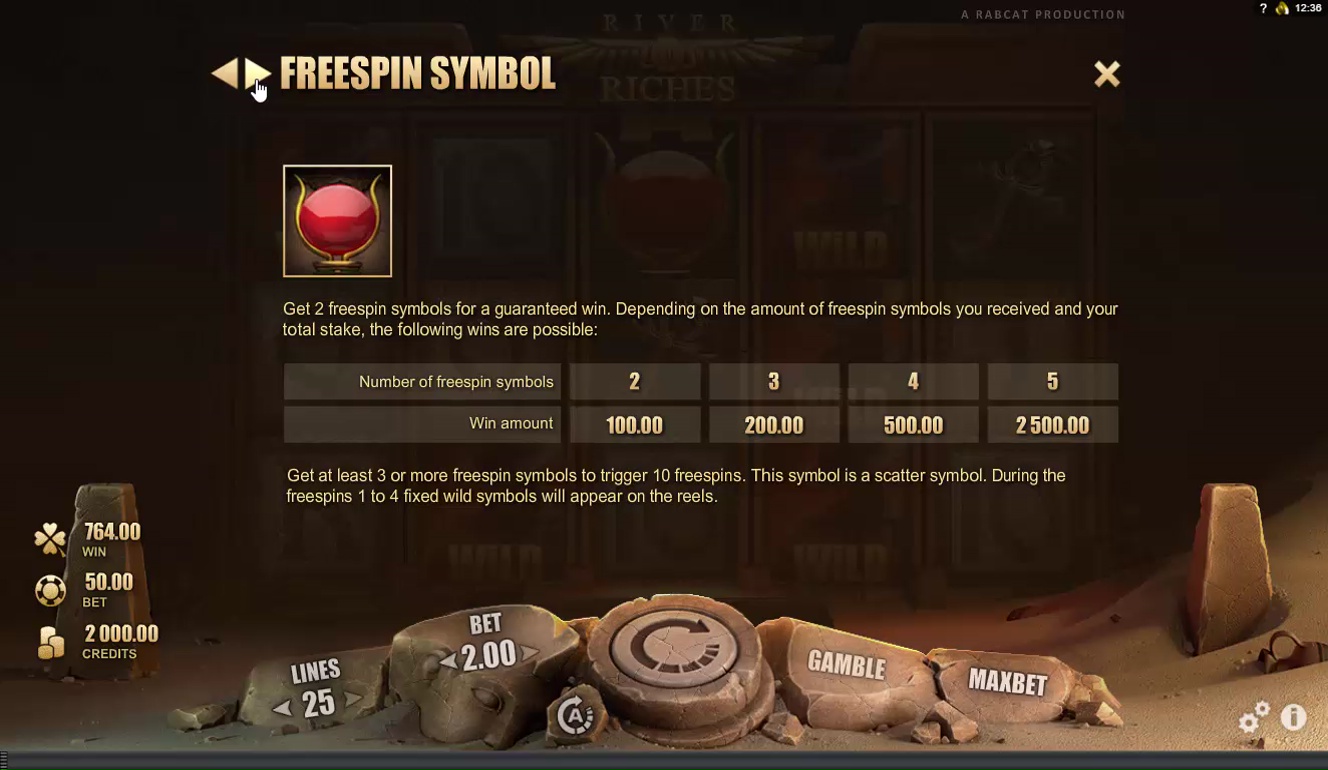 There is a jackpot of just $2,500 on the line in the game, which translates into a reward of 1,250 times the line bet. It’s a pretty low reward in a game which has ways to win and not that many features. There is an RTP (Return to Player) of 96%, which insures that the game is in line in terms of profitability with the other slot machines that you can access these days. There are many that do a lot worse than that, but there are also quite a few that do a little bit better.

Given the elements that the game works with, in terms of theme, graphics, features, payouts and average RTP, I would only recommend this game if you enjoy its theme and gameplay style. It’s got the right design to be enjoyable if you’re into Ancient Egypt slot machines, but with the amount of competition that it has in that category, I’m sure that you can easily find something better. The features are OK, but not extraordinary, and the RTP is normal for an online slot machine as well. All in all, not a game that tries to stand out in any way. 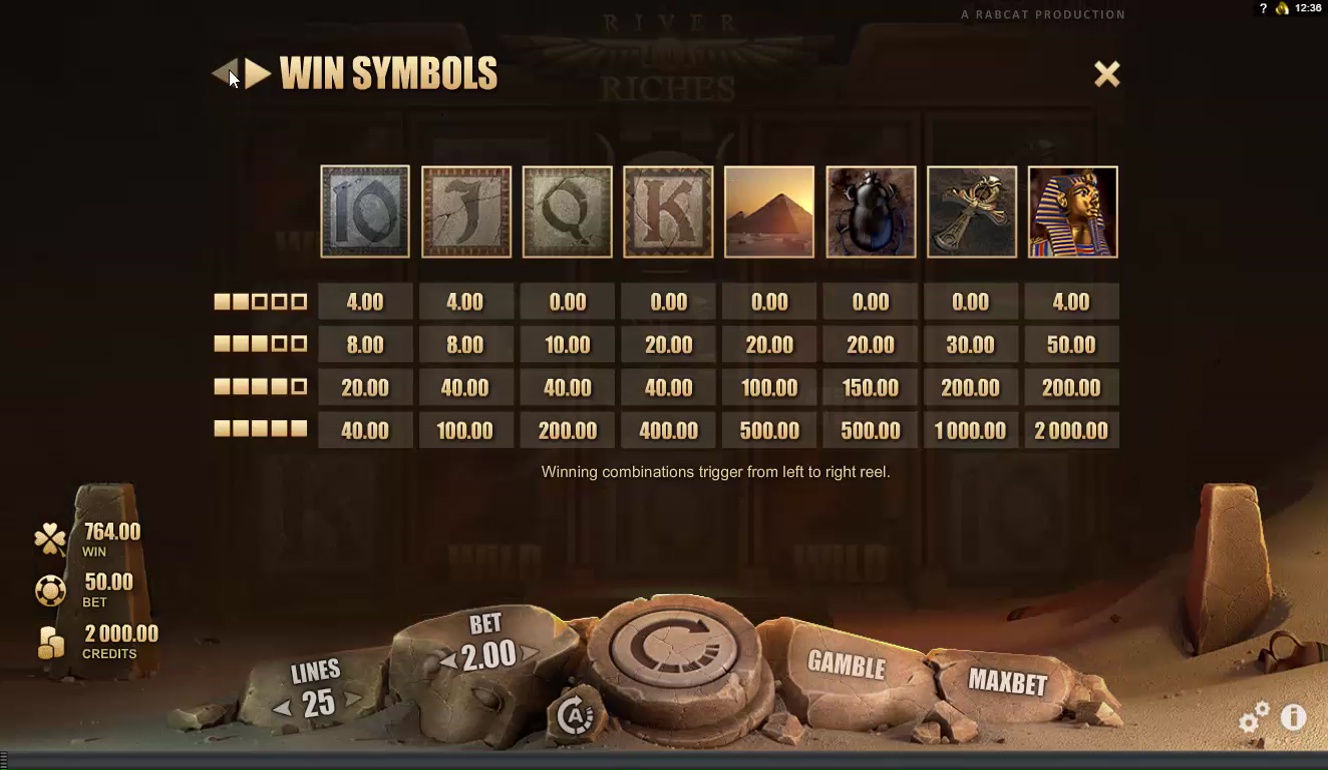