Rabbit in a Hat Slot Review

Rabbit in the Hat is a game that’s giving you magic, the kind that you’d see on a stage, performed by a guy dressed in a suit. He pulls rabbits out of hats, and does all sorts of other tricks. In this case, we’re getting a slot machine that was created by Microgaming. They decided to go with a setup that has just 9 active lines, which is on the low side for this developer, and for a 5 reel slot machine in general. Even though it might give you the impression that it is fairly simple based on the number of lines, it actually delivers a fair amount of features, including free spins, wild reels, random cash prizes and regular wilds. The prize that you’re after can reach a maximum value of $50,000. 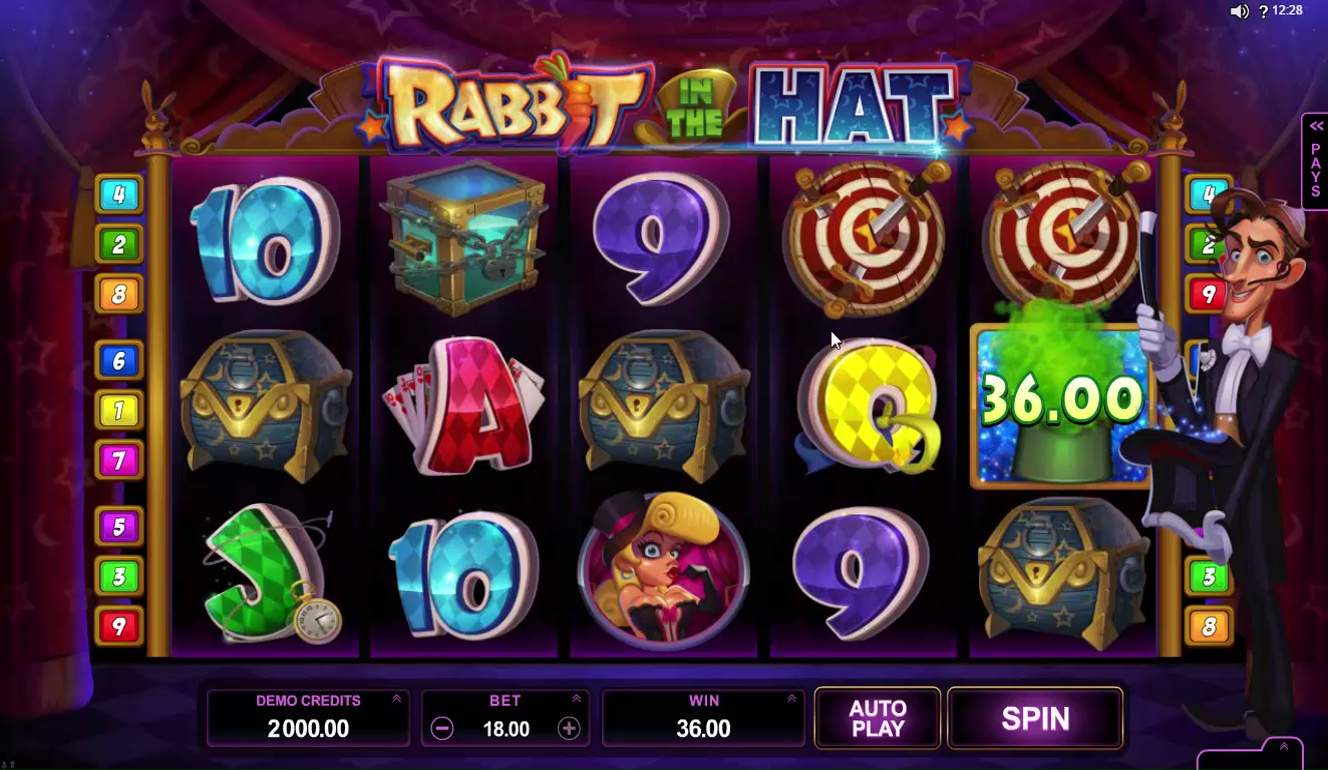 As a player in Rabbit in the Hat, your option is to change the number of coins that each active line gets, as well as their value. You don’t pick the number of lines though, that part will be fixed at 9. You have a maximum of 10 coins to use per line, with a top value of $1 and a minimum one of $0.01. The wager range is between $0.09 and $90, which should make it accessible to everyone.

The theme selected here is one where you get a magician on stage, alongside his lovely assistant. It’s not a new theme, and you will discover more than a few very well designed slot machines that use it. Rabbit in the Hat is a good competitor for the others though, and manages to do it with excellent graphics, with well chosen symbols and even with a bit of humor that you see in a couple of symbols. The magician is obviously a major symbol that you can get, along with the blonde assistant, with the rabbit, a chest, a target with knives thrown at it, a box with water that is locked and six icons that show you cards from 9 to A. The design is one of the things that should make you decide to start spinning the reels of this game, since it’s so well done. You have the stage in the background, with the curtains pulled apart to reveal the reels and the magician that’s sitting next to them.

One of the things that will get you features will be the magician that you see on the right side. He’s going to wave his wand and he will place hats with rabbit ears sticking out of them on top of the reels, and these can trigger features when certain conditions are met. What you need is for a Wild Hat to land on a reel which has that bonus hat on top. Depending on which type of bonus hat is present at the top, you can get one of four possible outcomes. If you get the Wild Reel Hat at the top, then you will find that the wild symbol will be expanded and will cover as many as three reels. The Cash Hat gives you a cash prize, with a random value. The Mystery Hat is giving you one of the other three features, at random. Finally, there is the Free Spins Hat, which gives you 10 rounds to play through for free. These hats are placed by the magician on top of reel 5, and then they move towards the left side of the screen, one position at a time. The free spins get hats on top of all reels at the start, and a new one is added to the 5th reel every round after that. The regular feature symbols get only one representative, the Wild Hat that is also used as a trigger in combination with the other four hats that appear at the top. On its own, you’re going to have it as a substitute for another icon, no matter of what type it is, as long as you land it in the right position to form a combo. 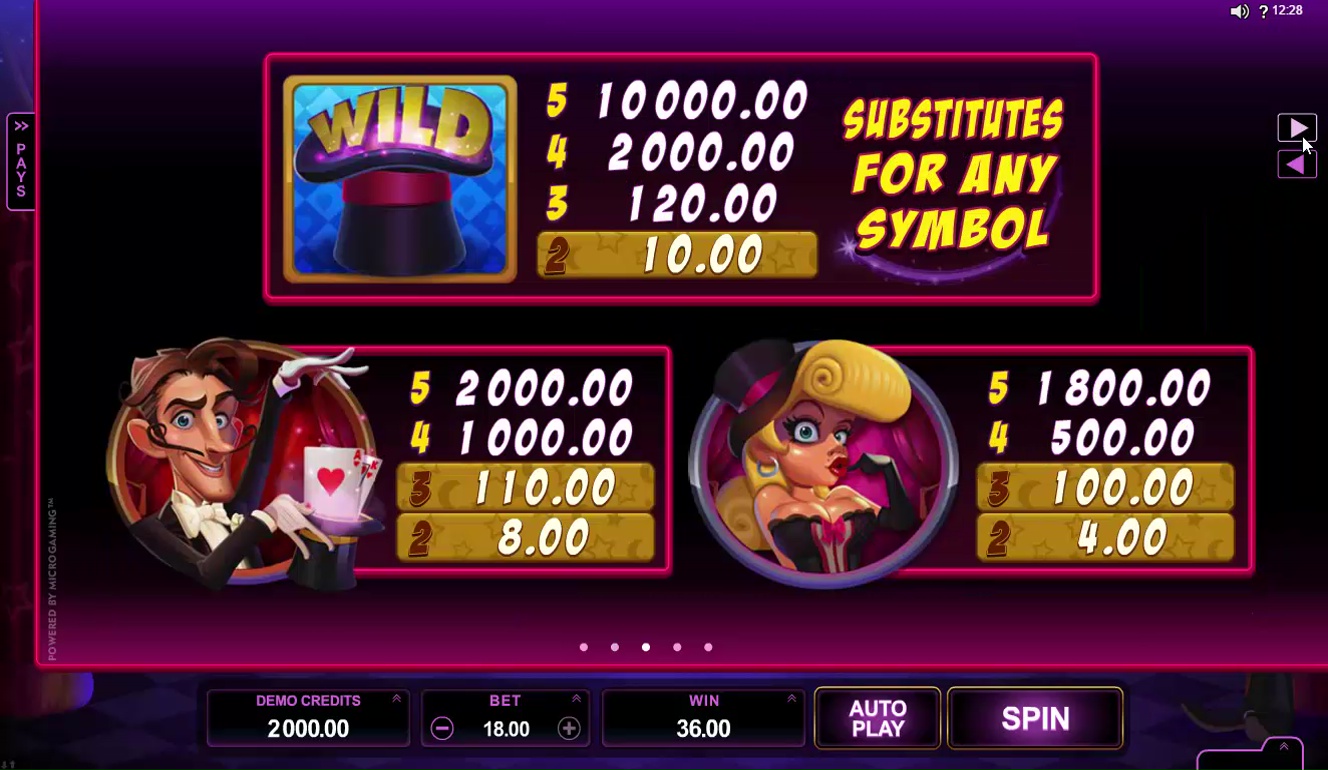 With a wager per line set at $10, Rabbit in the Hat can pay you back up to $50,000, so a 5,000x multiple. It’s the wild symbol that can give you that reward, in exchange for a combination of five of its own icons together on a line. The game’s Return to Player percentage sits at an interesting 96.61%, which I’d consider quite high for a slot machine. Most titles from Microgaming tend to have RTPs that are in that area, so you can go with any of them and still have similar odds of making a profit.

Rabbit in the Hat is an enjoyable slot machine, with a great design, payouts and features which feel different from the regular ones that most slots employ. 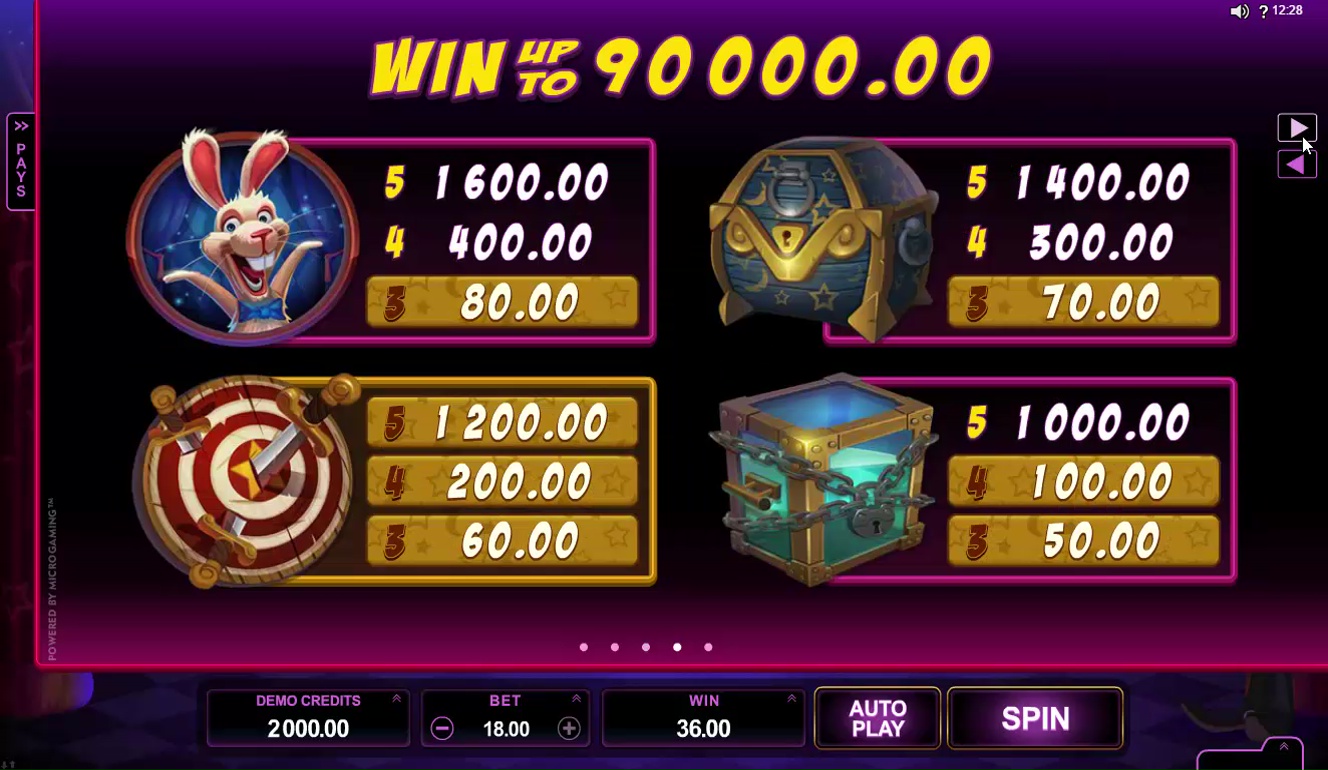