Max Damage is a game that’s placing the action in orbit around Earth, while on the reels uses futuristic space stations, UFOs and heroes. There is a cartoon like design inside, which makes it less sci-fi like than other slot machines which have taken on the same theme. It uses a setup which is not that unusual these days, revolving around 5x3 reels which get 243 ways to win in total from those 15 symbols. Microgaming relies on free spins, scatter symbols and stacked wilds for its major features. It advertises that it can pay up to $5,000 for a regular combination. 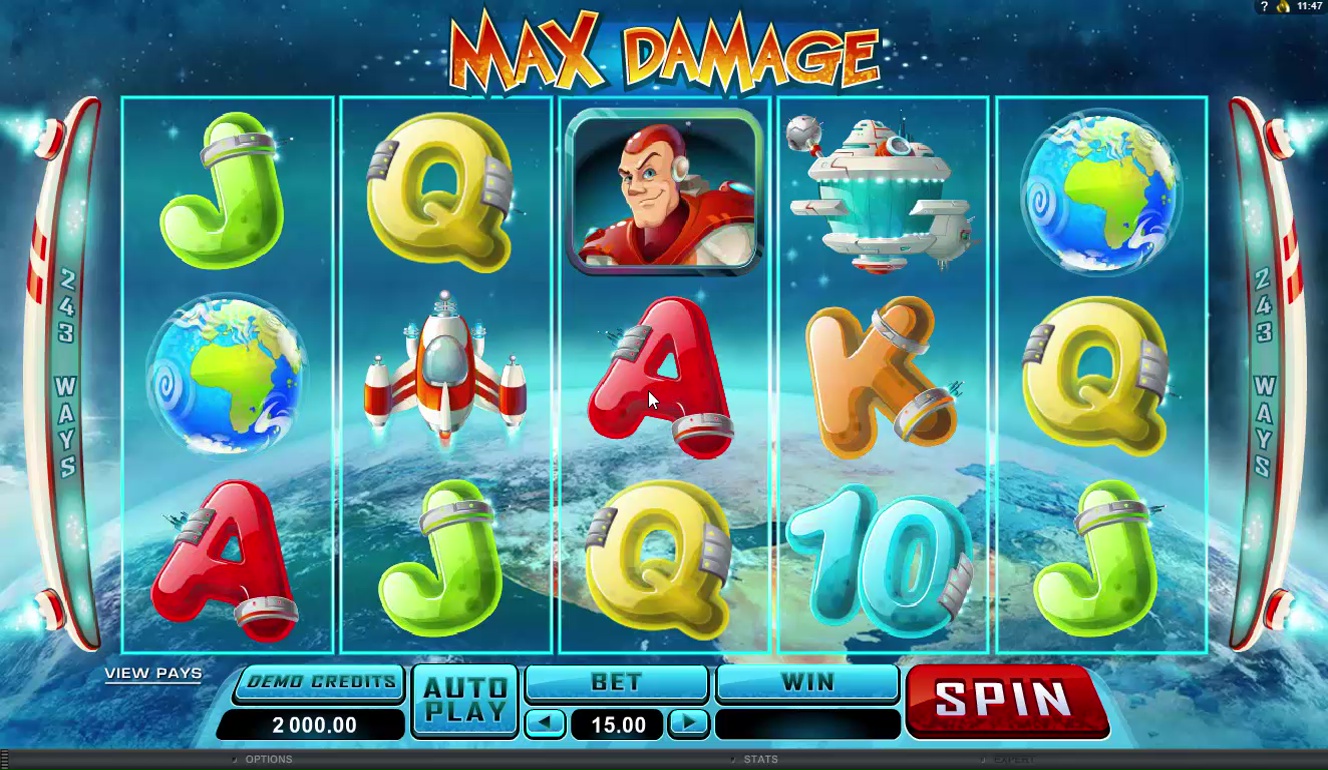 The theme of Max Damage obviously takes place in space, since that’s where alien ships and space stations can be found. The reels are placed in orbit of our planet and they appear to be held in place by large support columns, with active engines. The symbols are very cartoonish, but that doesn’t make them unpleasant to look at, on the contrary. The quality is high there, so I think you will enjoy playing with them. The downside is that you get the poker cards as well, though at least they made them just as cartoon like as the rest of the symbols. The better symbols would be the ones which actually show you something from the future. Max Damage is the name of the main character, which you see on the reels, and alongside him you will also notice images of space stations, space ships, Planet Earth, UFOs and a game logo.

In games with ways to win, such as this one, there is no need for the matching symbols to appear in fixed locations, in order to get you paid. Instead, you need symbols of the same type which appear on consecutive reels, starting from the leftmost column. You need at least three symbols on the reels 1, 2 and 3, to get paid, with the other two reels bringing you bigger wins if you also get symbols of the right type there. The wild symbol tends to get a lot of attention from most players, since it’s going to be rewarding you often, in more ways than one. Ideally, it will be used to form a combination with other wilds, since that’s the way to get the bigger regular payouts of the game. That way, it can give you a reward of up to $2,500, if you have as many as five game logo wilds on five consecutive reels. This symbol is stacked when it appears, so it also helps you form more combinations at the same time, as all of them are taken into consideration. As a substitute, a wild symbol can be part of a combination with regular symbols, but only if it lands on the reel where it is needed. The other reels need to have matching regular symbols, so that the combination can form. For example, you can get a combination where you have Max symbols on the reels 1, 3 and 4, while a wild symbol substitutes for the missing Max by appearing on reel 2. The result would be a combination of four Max symbols and a reward of up to $375 that wouldn’t have been possible if the wild wasn’t there. The only symbol that a wild can’t replace is the scatter. For the scatter icon, the developer chose the image of a green UFO, which has a three eyed alien inside. As all scatters do, it will appear anywhere it pleases, even on non-consecutive reels, and will reward you based on the total number of symbols of this type that are visible. Cash rewards which range from 1x to 50x the wager are offered for two to five UFO icons. 3, 4 or 5 UFO scatters on the reels will trigger the feature with 15 free spins and with wins all multiplied by 2x. The Alien Spaceship prizes are the only ones that don’t get multiplied, so this applies to regular combinations only. 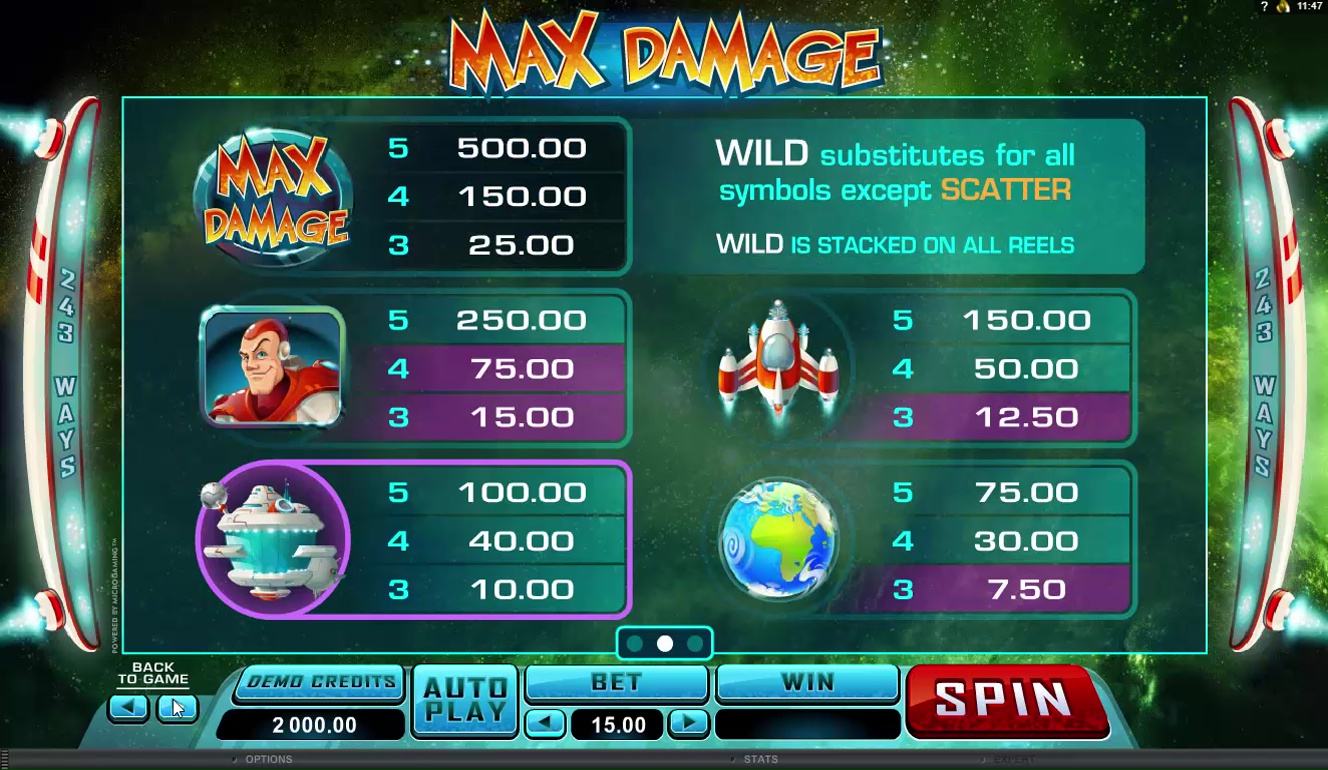 The stacked wild symbol forms the combinations with the largest payouts, offering up to $2,500. Because they come stacked, they tend to form a lot of combinations when they do appear in sufficient numbers and on the right three or more reels. Expect from Max Damage to be as profitable as any other Microgaming slot machine in the long run. Its RTP is sitting nicely at 95.98%.

I think that you will enjoy playing Max Damage, a slot machine with a futuristic cartoon like theme that might just make you crack a smile. I think that its features are pretty good as well. 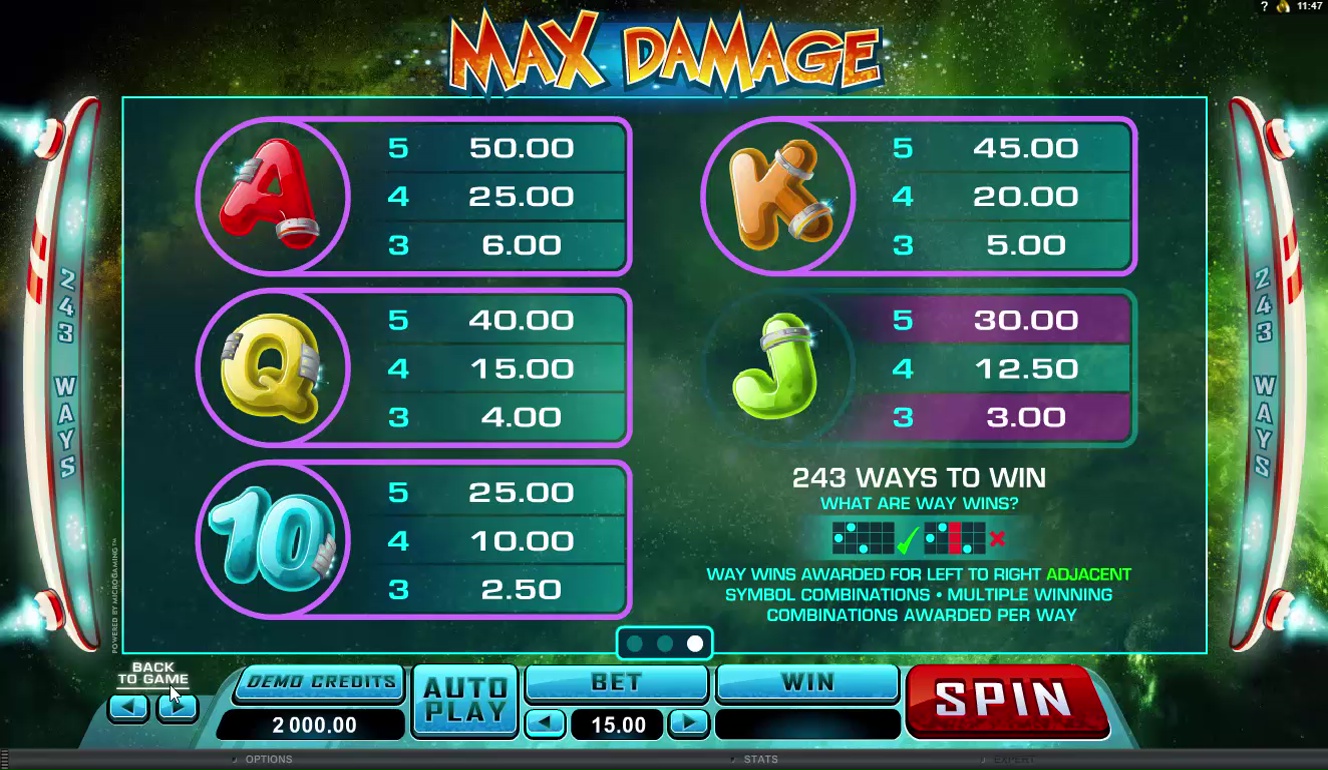