Hellboy is a slot machine that was created by Microgaming, in collaboration with Dark Horse Comics, the owners of the comic book with the same name. Its first appearance in a comic book was in 1993, and it quickly became a favorite. It made the transformation into a movie in 2004, popular enough to also get a sequel that appeared in 2008. Having a slot machine as well, to get the attention of players that loved the movie, was a natural move, and Microgaming decided to take it. Once they got the license, they came up with a comic book style design, so the game follows the original look, not the style of the movies. You have a game with a maximum of 20 active lines, used on 5x3 reels. You can apparently win a prize of $25,000 by playing this slot, and along the way you can discover features like wilds with multipliers, scatters, a bonus game and randomly triggered free spins. 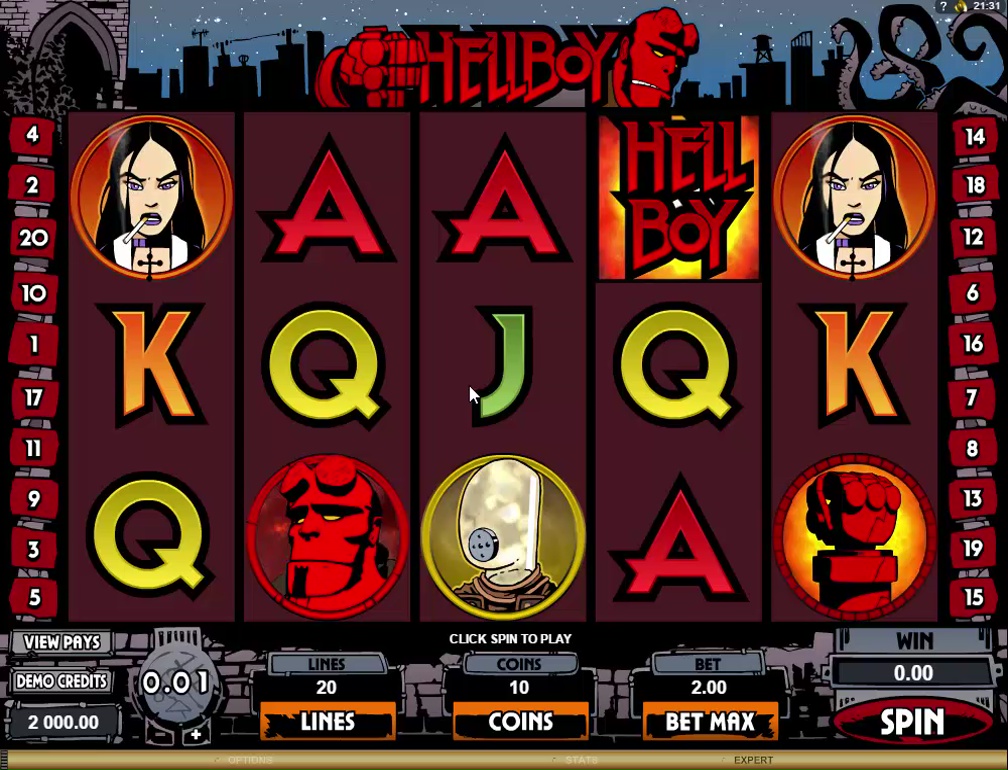 There isn’t much to comment about the betting system, it’s a standard one that you will find in other slot machines, which gives you full control over the three elements that compose it. You start by picking the number of lines, up to 20 offered. You then choose the coin value, of up to $0.25, and then you get up to 10 coins for each line. You can spend at most $50 per spin, the lines getting up to $2.50.

The theme of Hellboy is inspired by a comic book character that went by that name, and which has been introduced in 1993. It’s one of the titles in the portfolio of Dark Horse Comics. Hellboy is a demon that was summed to Earth from Hell, by the Nazis, and then he was raised among humans by a paranormal research group from the United States. The story is a novel one, and the Hellboy character is a lot of fun, so the comic books and the movies have gathered a decent fan base. For the most part, I found the design of Hellboy to be quite adequate, especially if I compare it with the look of the comic book. They wanted to create a slot machine that was based on the drawings from that comic, and they managed to do just that, so players that want the original experience and not photos of actors from the movies, will be quite happy with the game. They were a bit lazy at times though, and they chose to include Royals among the symbols, which as usual appear way too often on the reels since they’re the ones that pay less.

A fire inspired Hellboy logo is going to serve as a wild feature in this game, and it’s the one you want to see in as many positions as you can get it in. It’s a wild, so you can have it used as part of various winning combinations, if you can get enough matching symbols next to it as well. You can also form combinations which have only wilds in them, to get paid up to 10,000 times the line bet. You may not use a wild symbol as a replacement for a scatter though. Speaking of the scatter, Hellboy’s red hand, made into a fist, is the image that you will see in it. The scatter’s ability is to appear anywhere on the reels, not just on the same line, when offering you its rewards. You will get paid if at least two are on the reels, with the maximum of five paying you 500 times your wager back. While for cash prizes the game accepts as few as two scattered Fists to be present, for the Underworld Bonus Game you need at least three. Your mission in this bonus game is to locate a hidden relic of power, and then to secure it. A total of four levels are available and need to be completed before you get to the bigger prizes. Hellboy has free spins as well, but you don’t trigger them through scatter symbols, as in most slots. Instead, they’re offered at random. You get 10 free spins, with up to three random wilds present. You can’t trigger them again. 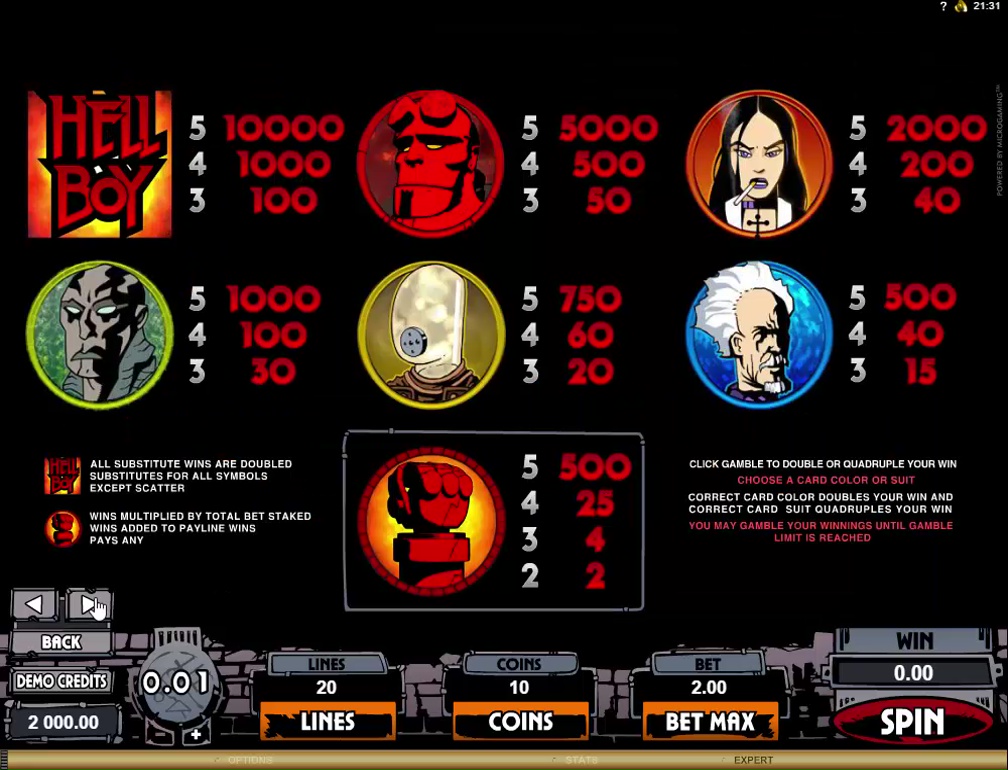 The payouts of Hellboy look as good as the features which are available inside, which is quite rare. There are two ways that you can get a payout of up to $25,000, or 10,000x the line bet, from this slot. You can get the prize through a five symbol combo of wilds, or through five scatters (500x total bet). The average RTP, which tells you that the game is going to return money to players at an average of 96.49%, is another good reason to play the slot.

Hellboy might attract players with its comic book inspired theme, but it has plenty of other arguments to keep them playing. From its longer than average list of features, to its top payouts and its average RTP, it ticks every box and it seems to be a slot machine worth playing. 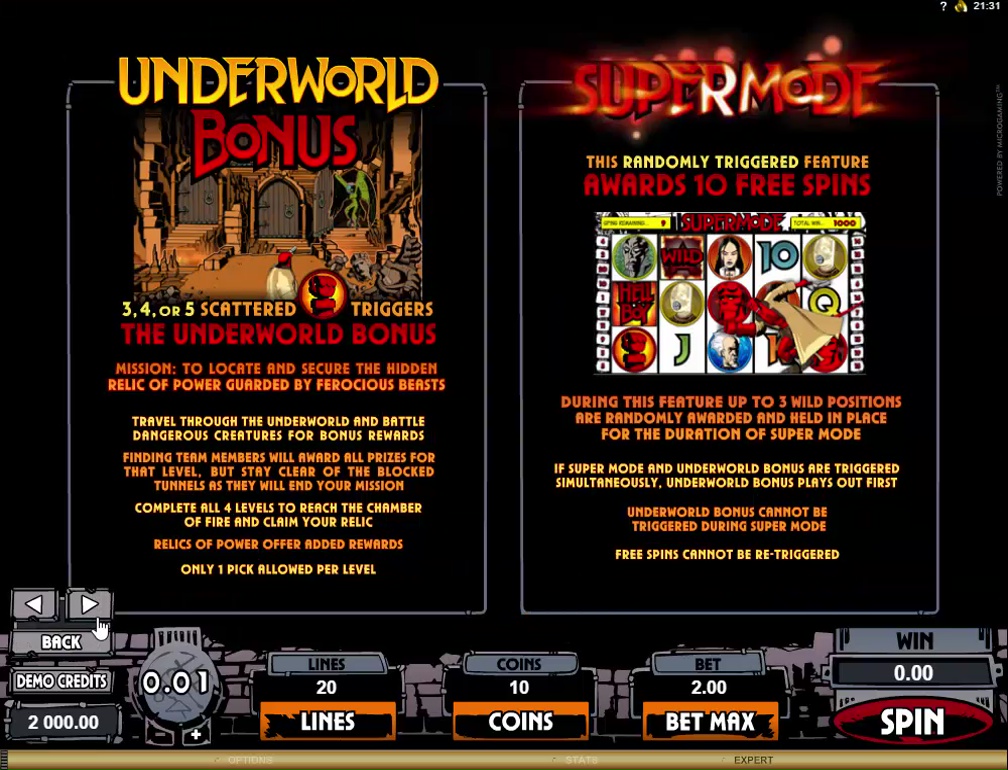