Siberian Storm’s action does seem to take place in Siberia, but its focus is not as much on the cold and the related dangers of the region, as it is on the mighty Siberian Tiger
7.5Total score
Bonus rounds8
Graphics6.5
Soundtrack8

Siberian Storm’s action does seem to take place in Siberia, but its focus is not as much on the cold and the related dangers of the region, as it is on the mighty Siberian Tiger. Most of the symbols chosen for this game have some connection to the white tiger or to its more regular cousin. Siberian Storm has an interesting system in place, with 720 ways to win forming on reels which come in different sizes, with 3 to 5 symbols shown on them. It’s a type of system called Multiway Xtra by IGT, the developer, and it pays both ways. Your rewards will apparently give you up to 1,000 coins back for just one combination formed, but there are also interesting features to get, things like scatters, wilds or free spins. 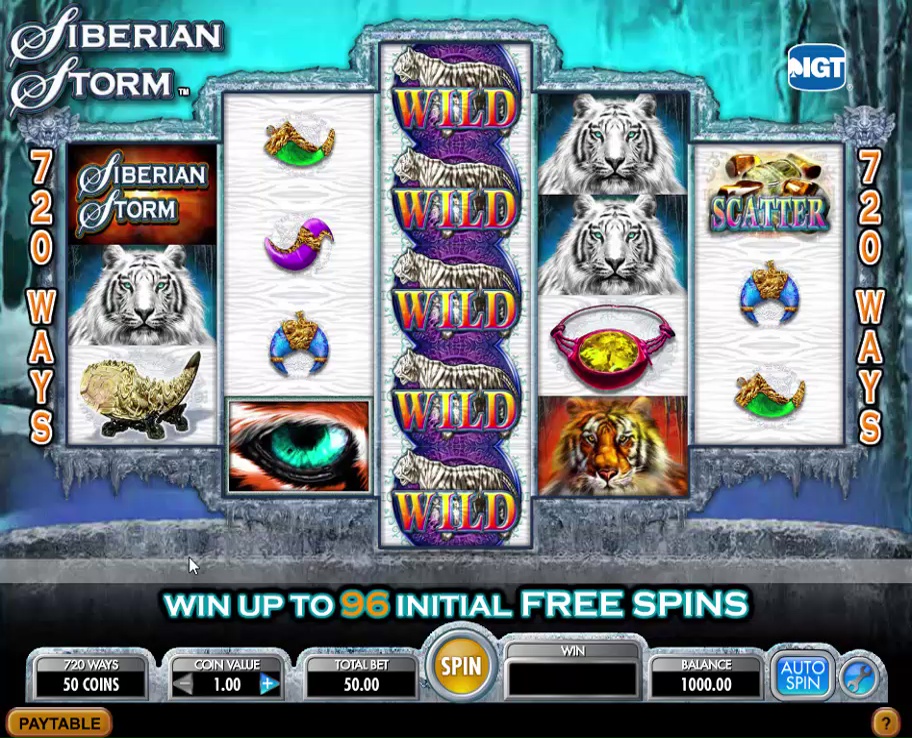 In every slot machine which uses ways to win, you will find that the developer offers the option of bet lines whenever bets are selected. In the case of Siberian Storm, they chose to use 50 lines and 50 coins for their bets, and this will be enough to cover all the ways to win. As for the coin value, that’s something that you need to decide, but the starting point seems to be at $1.

As the title promises, the action does take place in Siberia, so you’re getting an ice and snow covered landscape in the background. The region is only represented there though, the graphics from the symbols being related to tigers and to jewelry that is inspired by them. The Siberian Tiger gets a lot of love here, but the regular tiger is also present in a symbol. Add images of the tiger’s eye, of jewelry that is modeled after eyes or claws, and you can see that this is definitely a tiger themed slot machine first and foremost. The IGT style of graphics is generally not very impressive, and it’s true of Siberian Storm as well, and of what it has to offer. I think that most players will find its graphics average at most, but I did appreciate that they didn’t go with poker cards in it, and that everything is connected with the tiger in some way.

The first thing that you will notice, after the game loads up, is that the reels are of different sizes. The first and the fifth reels will have 3 symbols on them, the second and the fourth ones get 4 symbols, while the third reel has 5. When forming your combinations, the game looks at matching symbols that appear starting from one of the two sides, the game paying both ways. The symbols have to be on consecutive reels, but they don’t need to be in fixed locations, like they would have to be in a regular slot. A total of 720 ways to win are possible in this particular reel system. IGT calls this system MultiWay Xtra. Two symbols are considered special and bring you extra features. One of them is the Wild Tiger, the other has a Scatter logo. A Wild Tiger symbol may appear only on the middle reels, and from there it has the ability to be included in regular combinations, formed through the ways to win system. It just needs to be visible on those reels, to be able to help the regular symbols. The other symbol, the Scatter, will be fun as well. Appearing three to five times, it is capable of giving rewards of 2x to 50x total bet, so up to 2,500 coins. This is the only role that the scatter symbol seems to have in Siberian Storm. The Eye of the Tiger is one other symbol to pay attention to. You need this symbol to appear on all five reels, in order to get from it 8 free spins. You can have more than one such symbol per reel, so you can form multiple combinations at the same time. You can get at most 96 free spins from these symbols. Extra free spins can be won inside, this time by landing 5 symbols with the White Tiger’s Eye. 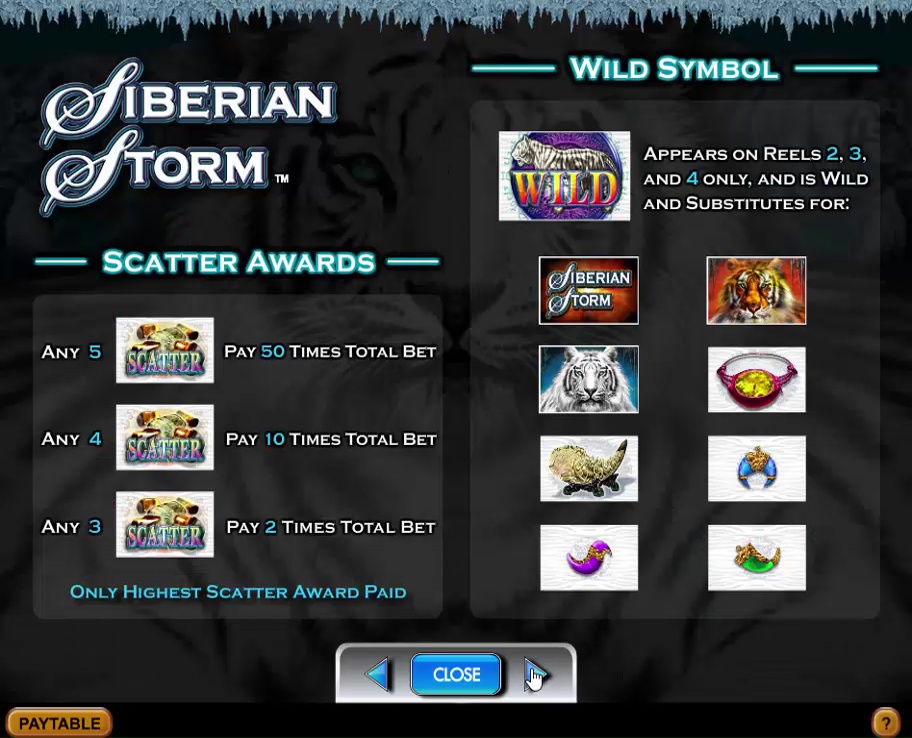 The logo of Siberian Storm will have the best payout of the game, giving up to 1,000 coins to the luckiest of players. The actual value will obviously depend on your wager selection. If you check out the Payback Information section on the paytable, you will notice that IGT claims that the game has a theoretical payback of 92.52% to 96%. At 96% it would be a good slot machine, but its lower possible value can’t be ignored, and makes this a game to avoid.

I’m disappointed by the average payback percentage, otherwise it would’ve been a decent game to play if you’re into nature themed slots. 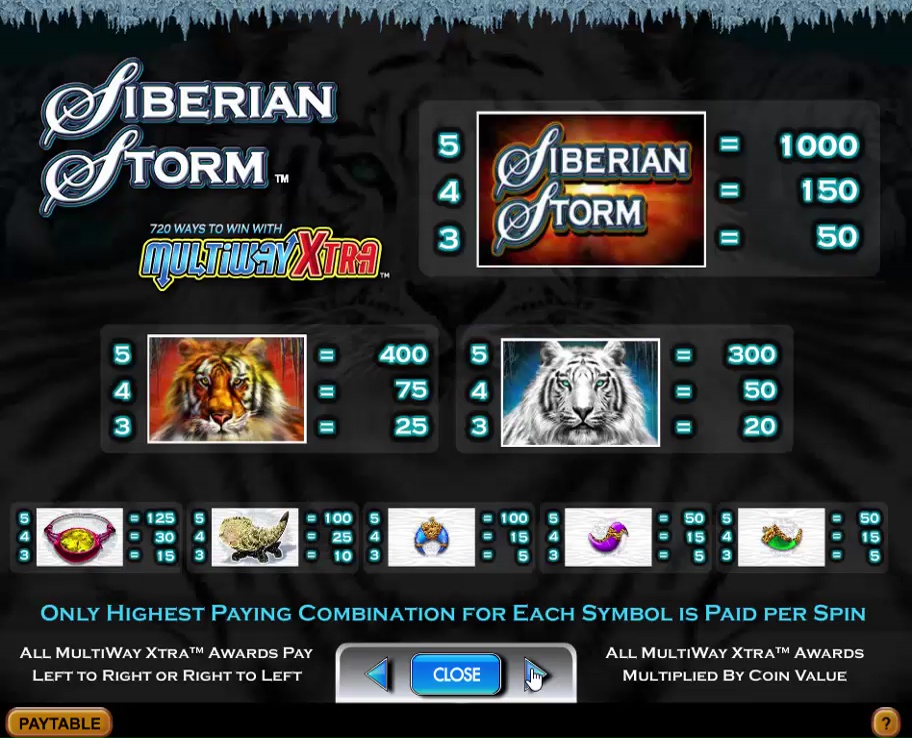