Tally Ho is as British of a game as they come
Play Tally Ho
6.7Total score
Bonus rounds7.5
Graphics6
Soundtrack6.5

Tally Ho is as British of a game as they come. Inspired by the aristocracy of Great Britain, it is a slot machine that is built around fox hunts, around foods that might be served there, tea and other similar images. It’s also an older game, so it doesn’t have the attractive graphics that Microgaming created for its more recent slots. A game with 5 reels usually offers more than this, but Tally Ho only delivers 9 active lines at most. You can apparently get a jackpot with a value of up to $120,000. Among the features that are advertised for this game, you will find the Wild Horse, multipliers, scatters and free spins. 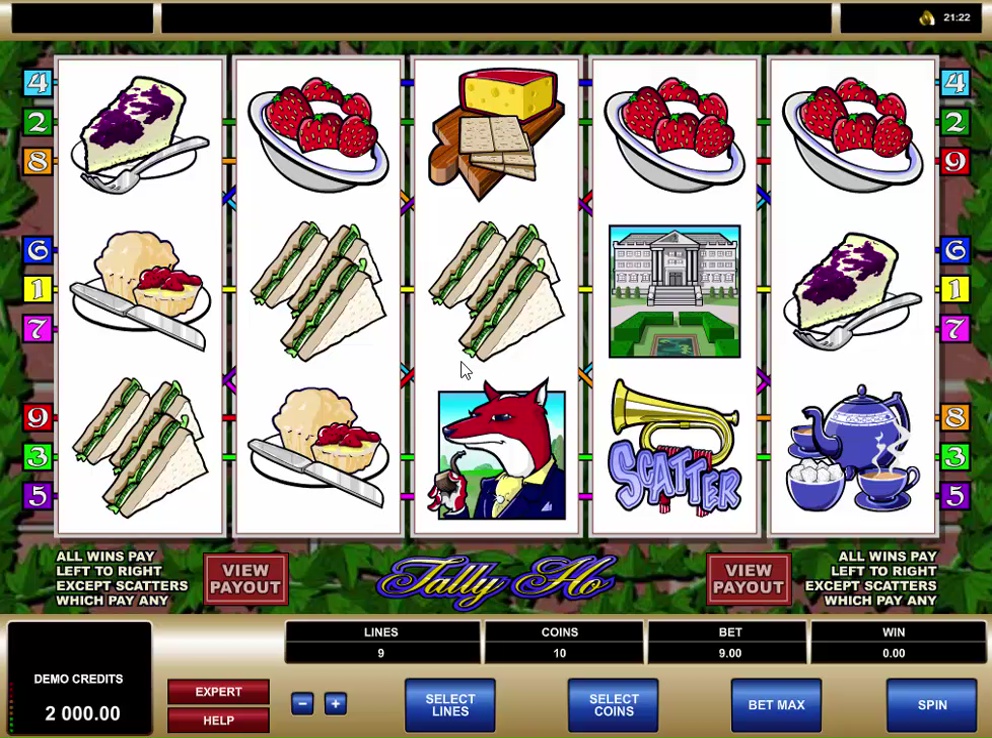 There are several choices for you to make, before you can click on the Spin button, at least if you want control over the bet values. The value of a bet is going to be influenced by the number of lines you want active, between 1 and 9 being available. Another factor will be the number of coins which you select for each of those lines, up to 10 being offered in each case. Finally, you can select the value of the coins, which ranges from $0.01 to $2. Your bets in this game will have a value of $0.01 to $180, the lines getting up to $20 each.

A fox hunt seems to have been the inspiration for Tally Ho, first and foremost. It’s gone into a couple of weird directions from there though, such as the choice of using foxes for the main characters, the aristocrats which are shown among the symbols. The other symbols which were selected here are normal ones for such a slot machine with British roots. You will find the hunter’s trumpet, a horse, two fox characters dressed as aristocrats, a palace, a retro car, heraldry, tea, strawberries with cream, sandwiches, cupcakes, cheese and cheesecake. All in all, it’s a display that’s going to make you hungry just by looking at it. The downside with this game is that it doesn’t look impressive enough. It’s got an interesting theme, or at least a unique one, but the quality of the symbols and background graphics is low. It looks like a game that they’ve released a decade or more ago, not something that a player would enjoy these days. Still, it shows that at the time it was a pretty good game. At least it doesn’t offer unrelated symbols, only ones that have some kind of connection with the British.

It looks like a simple game, mostly because of the quality of the design and the number of lines, but the same can’t be said about its features. It’s a pretty good offer there, all things considered. You will find it easy to spot the feature symbols, since the Horse has the Wild logo on it, while the Trumpet has the Scatter logo. The Wild Horse will be used the way you’d expect, as a replacement more often than not, in combination with all sorts of regular symbols that are missing a symbol in that exact same position. It gets better though, since the wild symbol of this game has the ability to double the win if it is offered thanks to its assistance. The wild does not substitute for the Trumpet scatter. Another way to take advantage of the Wild Horse is by getting it two or more times on the same line and from left to right. It forms combinations which pay up to 6,000x, which would be the jackpot of the game. As for the Trumpet Scatter, these symbols may appear on any position on the five reels, and if you get at least two you can expect a reward from them. These rewards start from 2x total bet and get up to 500x. Besides getting these cash prizes, if you have at least three Trumpets visible you will also receive access to a feature with 10 free spins. Wins are quadrupled during free spins, no matter how they come to you. You can even retrigger the free spins, and get another 10 rounds, if you land another set of 3+ scatter symbols. 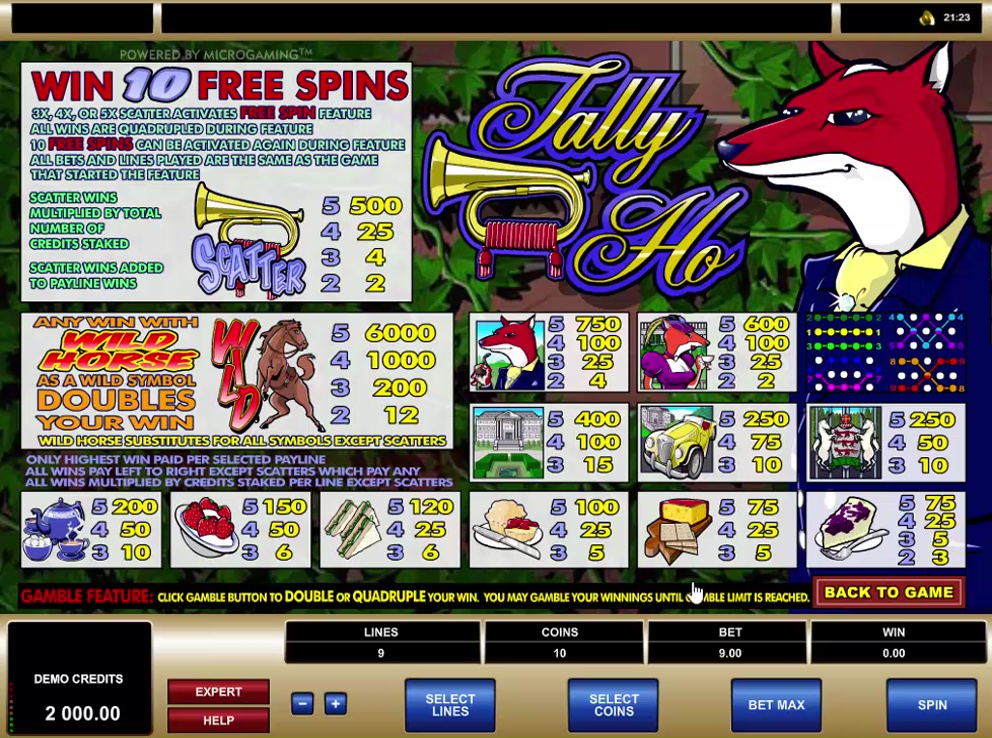 For the base game, the largest possible prize from Tally Ho will be worth 6,000x your line bet, so up to $120,000. It gets even better if you land that combo during a free spin, thanks to the 4x multiplier applied there, which will increase the prize to $480,000. Despite the very high potential payouts, the RTP in Tally Ho is actually a bit under the ones you see in their newer slot machines. Sitting at 95.87%, it’s still a pretty good number though.

Tally Ho has a theme that you’re not going to see implemented anywhere else, huge top payouts, but the RTP is the usual one from Microgaming. The big downside is the quality of the design.