Centre Court is a tennis themed game, one of the few available at online casinos, and a title that has been designed by Microgaming
Play Centre Court
6.3Total score
Bonus rounds6.5
Graphics6
Soundtrack6.5

Centre Court is a tennis themed game, one of the few available at online casinos, and a title that has been designed by Microgaming. They didn’t manage to get us a great tennis themed slot machine as far as I’m concerned, either because it’s an older game of theirs, or because they simply wanted to offer a simpler experience in this case, at least graphics wise. The slot machine gets the 5 reels of a modern slot machine, but the developer used only 9 lines for them. You can expect to find some interesting features though, with stacked wild symbols being present on the reels, along with the usual scatters and the free spins that they can get you. The big prize of the game appears to reach a maximum value of $45,000. 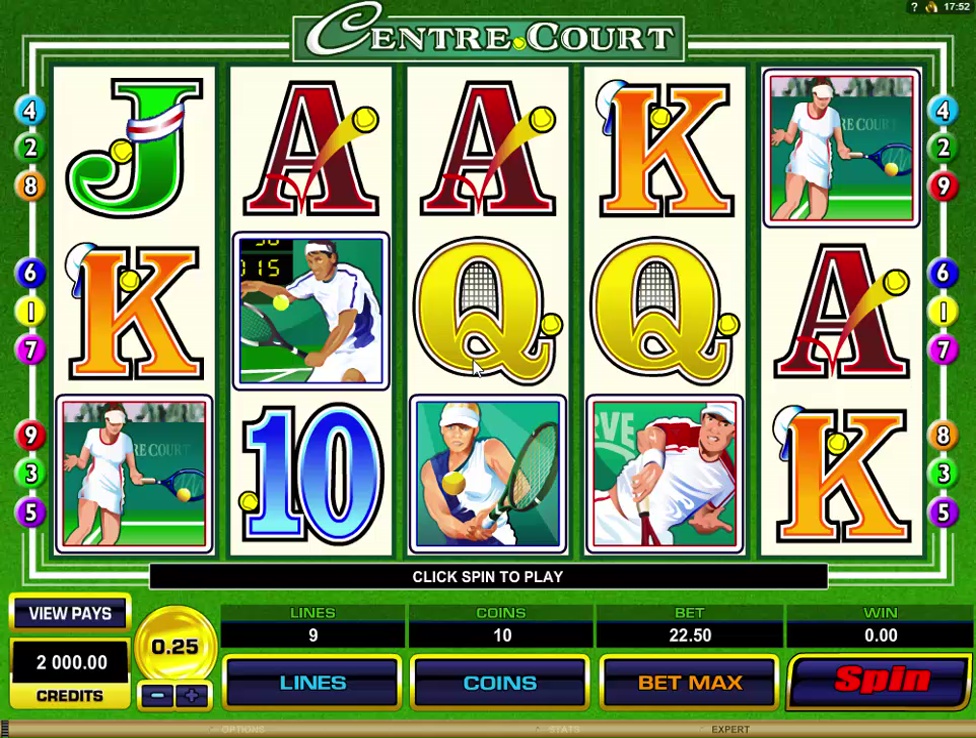 You may change most of the bet settings that the game offers. You have only 9 lines at your disposal, and you can select them all, or you can get only some of them with your bets. For each of the active lines, the game gives you the option to have up to 10 coins in their bets, with values which range between $0.01 and $1. You may wager at most $10 per line, or $90 total.

The theme of Centre Court is a simple one, being inspired by one of the world’s most popular sports, by tennis. Both the women and the men are represented by the game with its symbols. The theme might be based on a fairly popular sport, but there aren’t that many examples of slot machines to cover this topic, or to at least do it very well. I’m afraid that Centre Court doesn’t quite manage to do this either, being a more dated looking design than I’d want. The game’s symbols are the expected ones, considering the theme, starting with a gold trophy and a tennis ball, continuing with the images of the male or female tennis players, plus the poker cards. The background image shows the green of the grass tennis court. I haven’t enjoyed the graphics quality that much, and the reason is that it’s not very realistic. There aren’t enough details in the tennis player symbols, the poker cards are basic and the background is just modeled after grass, without variety in it. Overall, it’s just as average looking as the other tennis themed slot machines that are offered by other developers.

As for the features, they look pretty good, better than the design at least, and they include stacked wild symbols, the scatter and free spins. The stacked wild symbol is the unusual one in this case, since few slot machines rely on it. It’s a powerful tool in the player’s arsenal, since it can appear on multiple positions on the same line, improving the odds of a combination forming as a result. The wild helps you out most of the time as a replacement for some other symbol that you need in the position where the wild is. Sometimes though, you might see the wilds form combinations just with their own icons, and they can pay up to 1,000x in that case. The wild symbols will never replace scatters in this game, or in most of the others where it appears for that matter. Speaking of that scatter, the symbol that has gotten this role is the Tennis Ball. It’s marked with the word Scatter on the side, so there is no chance of you missing it when it makes an appearance. What’s important about this symbol is that its rewards come from having two or more present anywhere in view, not in particular positions. Up to 500 times the wager value will be returned to you, if you get scatters to appear. The free spins feature is triggered when you have 3+ symbols with the Tennis Ball visible. There will be 18 free spins offered at this point, with the multipliers varying between 2x and 5x for each spin. 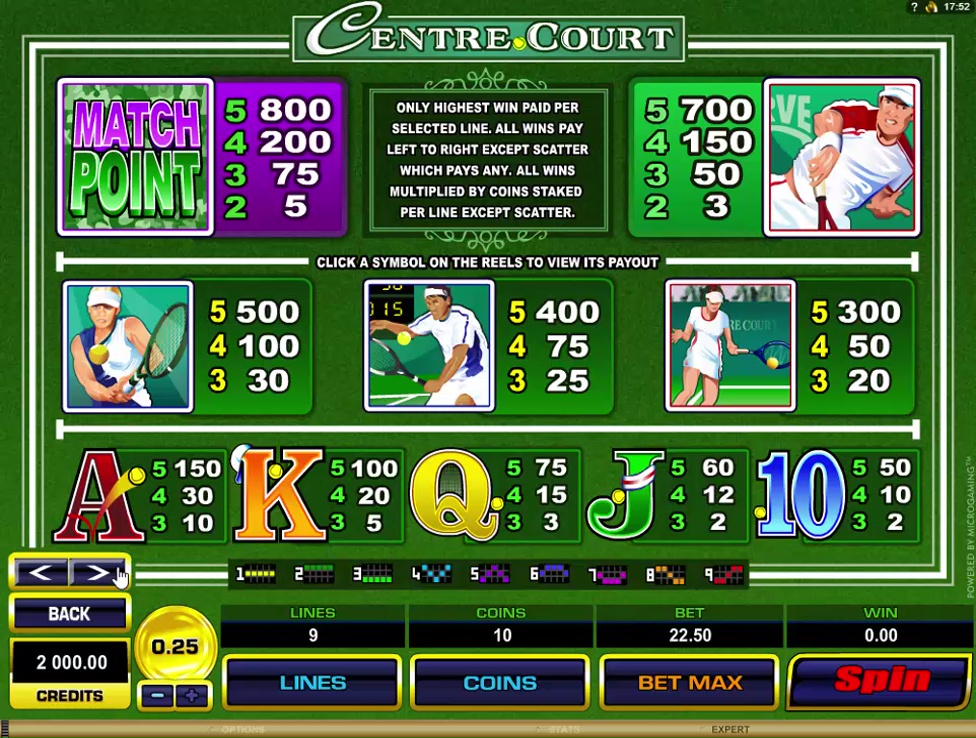 A single winning combination can pay up to 10,000 coins, which is only 1,000x the line bet. The $10,000 that can result from this can be increased though, getting up to $50,000 during the free games. The base game top payout is going to come via the scatter, which will pay up to $45,000. The average Return to Player, of 95.51%, makes Centre Court one of the better choices among the tennis themed slot machines available right now.

Centre Court is a Microgaming production, one that will have certain advantages that are hard to be denied, such as the features or the payouts which can be won thanks to them. The average RTP is another thing that it has going for it. I wouldn’t play this game for its graphics though, they’re not even average.