Wins of Fortune is a game with a theme that appears to get inspiration from China, which is something that you will see in a lot of the newer slot machines. Quickspin did try to make the slot machine a bit more interesting than that though, so the action revolves around deities and mythical creatures from the legends of the country, and they’re not just showing us objects that were made there. In terms of layout, the reels start off with 3 symbols each, then go to 4 symbols, and eventually you get 5 symbols for the last reel. 5 reels are available in total, and they form anywhere between 76 and 259 ways to win, since the reels can get extra symbols in certain moments. I’ve seen payouts of up to $250 being offered in this game, while the features include respins and super respins, right alongside the more common wilds. 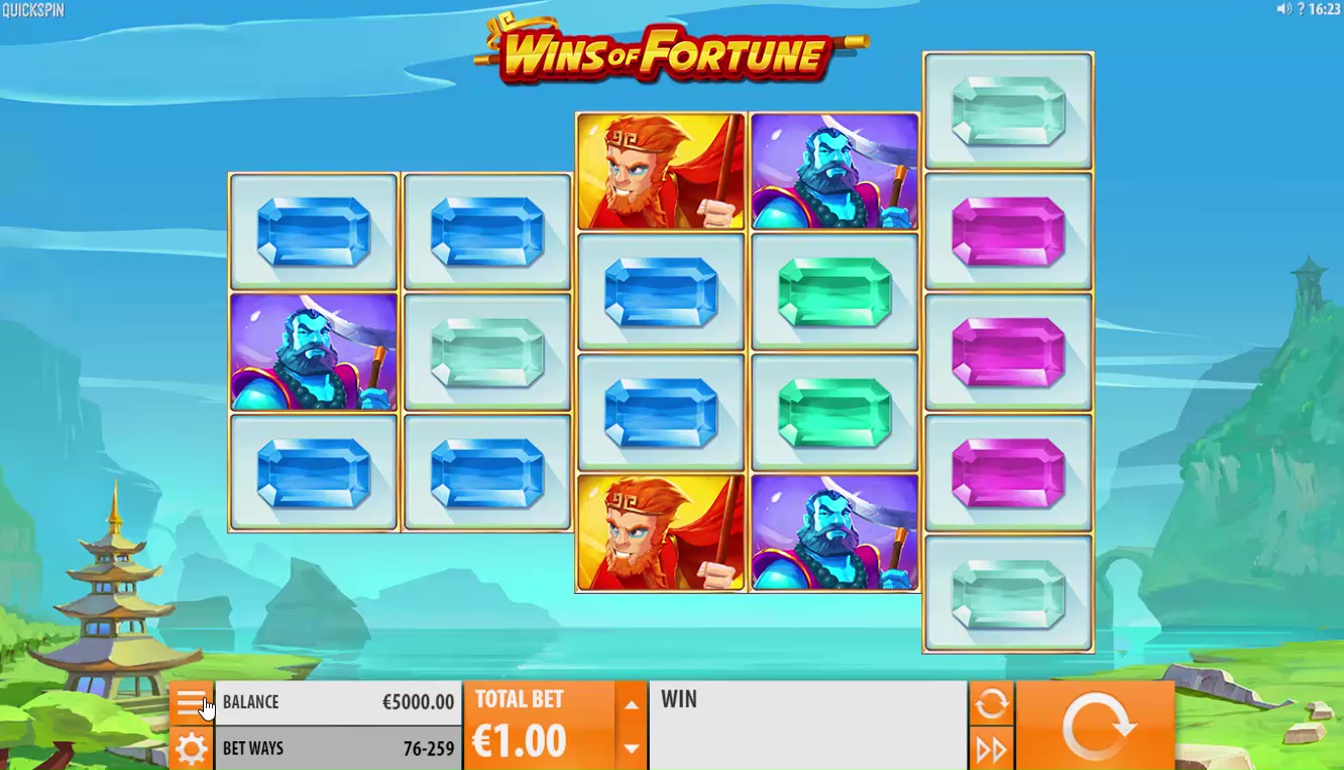 You normally have 76 ways to win, with a chance to get up to 259 ways to win. The game doesn’t really care about that, and simply asks you for the total amount that you want to use. The Total Bet section can be used to pick a value between $0.20 and $100 for your spins.

The action of Wins of Fortune takes place in the Chinese countryside, and for the most part it is nature that you will see in the background image. There are tall cliffs next to the sea, there are green fields and some Chinese style buildings, easily recognizable thanks to the way they build their roofs. The theme in Wins of Fortune seems to revolve around legendary characters from the history of China. Check out the more important symbols of the slot and you will notice the monkey god, a pig dressed as a farmer, an emperor and a blue skinned god. If you go beyond those, you’re going to find gemstones that all have the same shape and size, but different colors. The gemstones are the equivalent of the Royal cards in other slots, the ones that pay least and appear most often. If you discount the way the reels look, a bit crooked since they’re of different sizes, the game has a very good design, one which you can easily enjoy. The least impressive side is the collection of low paying gemstone symbols, but everywhere else you will see a lot of detail in the design.

The first thing that will make an impression is the way that the reels are built. You get three symbols for each of the first two columns, four symbols for the next two and five for the last one. Only 76 ways to win are formed on them, but you will get a chance to trigger more along the way. Wild symbols are simple features in this case. Their image is that of a logo of the word Wild, written in gold letters on a dark red background, surrounded by a gold border. The game will allow you to use wild symbols as substitutes, in combination with any regular symbols. They just need to be on the reel where you’re missing a symbol, to form a combination. Since there are no other feature symbols in the game, there are no limits to the substitution ability of the wild. The Respin is one of the major features here, since they happen whenever you have a winning combination formed during the paid spins. The symbols which were in the winning combo will be moved one position to the left side each round, after which the other symbols will respin. Each time a respin happens, the number of symbols on the reels will increase, and eventually you can end up with a 5x5 layout filled with symbols. At that point, you are getting the full number of ways to win, 259. You will keep getting respins until you get no more additional wins from them. Once you’ve gotten four consecutive respins, you will get a Super Respin from the slot. All winning symbols are kept in place during this respin. When you get no more additional winning symbols, these Super Respins stop as well. 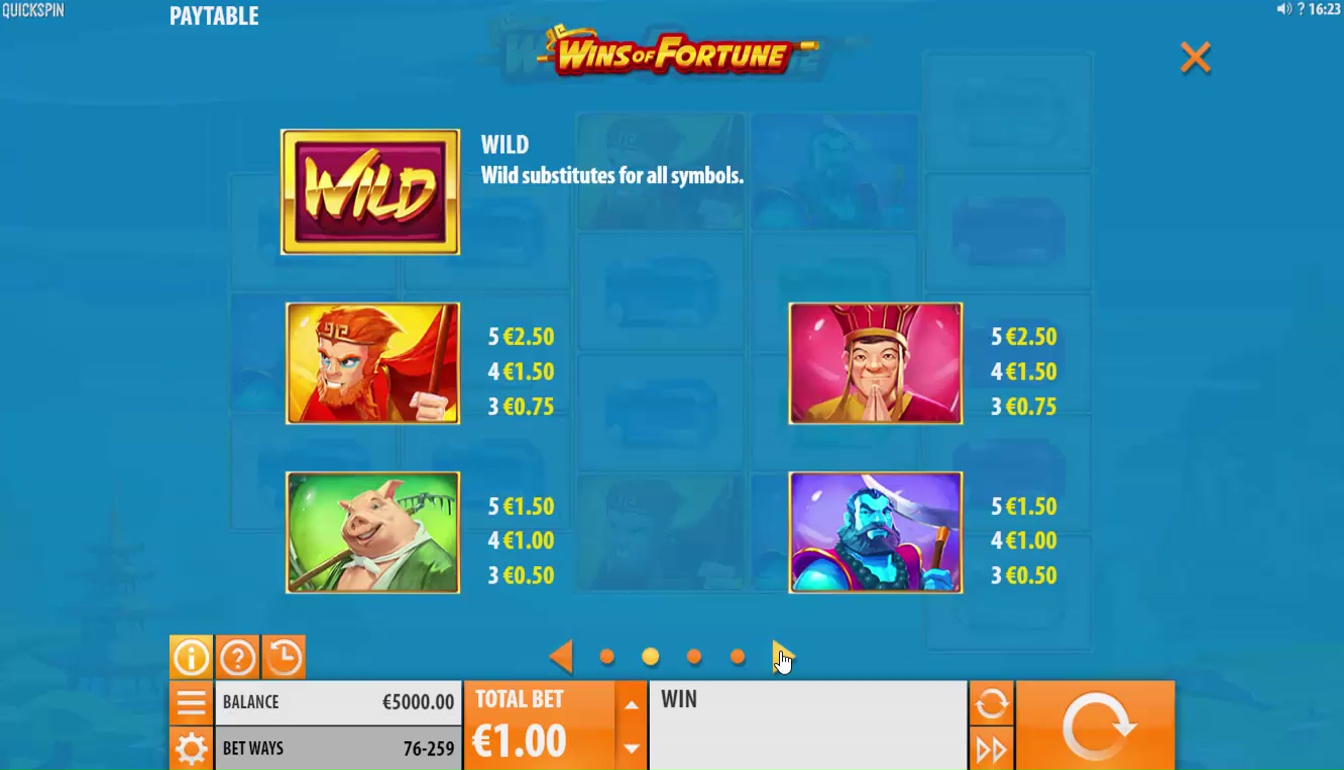 This is not the sort of game where you can expect to win huge jackpots, it’s not going to make you rich with just one spin. It offers at most $250 for one combination of the right five symbols. Play N Go was pretty generous with the average Return to Player in this case, the slot having one which is at 96.54%.

Wins of Fortune should be a game to enjoy for most players, featuring a unique game style, high quality graphics and a better than average RTP. 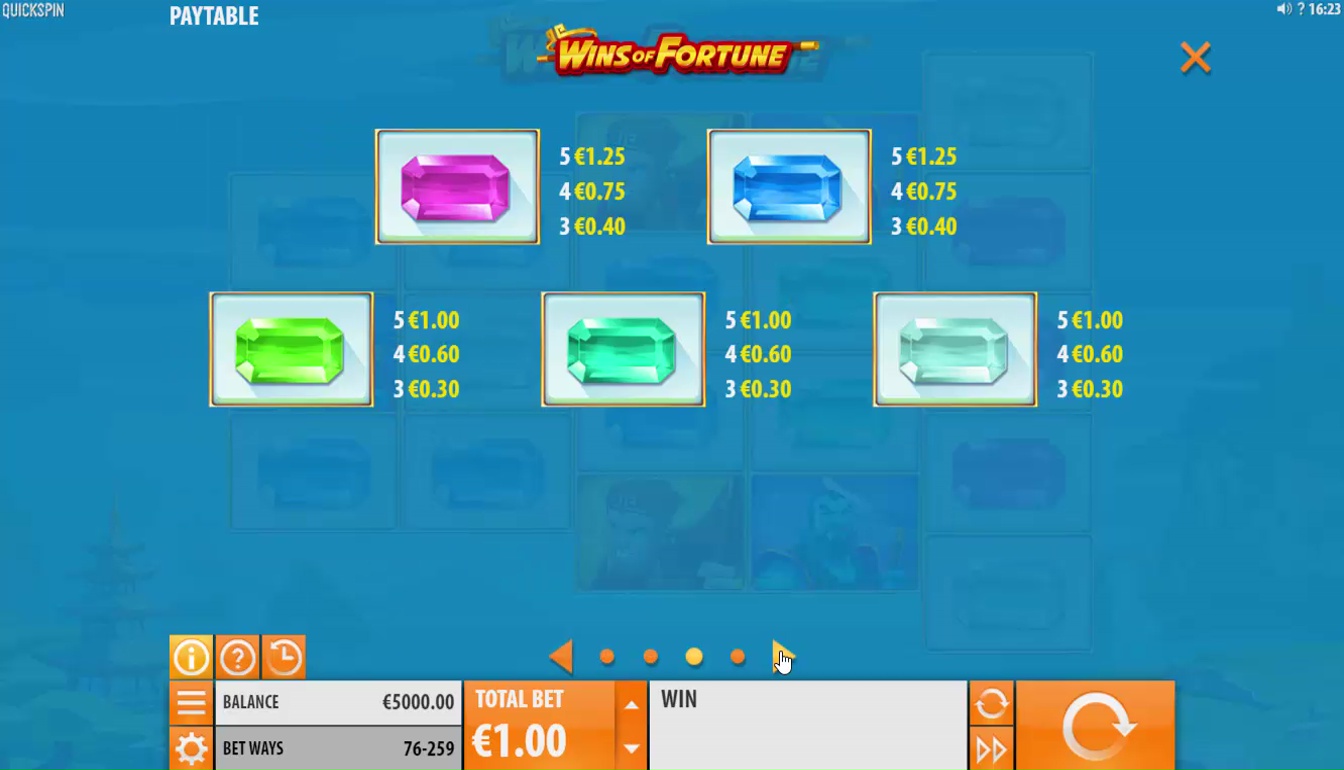