Magic Shoppe is a game with a strong influence from the world of magic in its design, though not in the usual way that this theme is implemented. Instead of getting the magician on stage, you get a look at a store that sells magic related items, and it’s a pretty dark looking spot that Betsoft created for us here. Magic Shoppe is going to be a slot machine with 25 active lines, which gives you a chance to win as much as $12,000 under the right circumstances. You will get features that include two types of free spins, scatter symbols and wilds, and overall it’s an area that I’m pretty satisfied with. 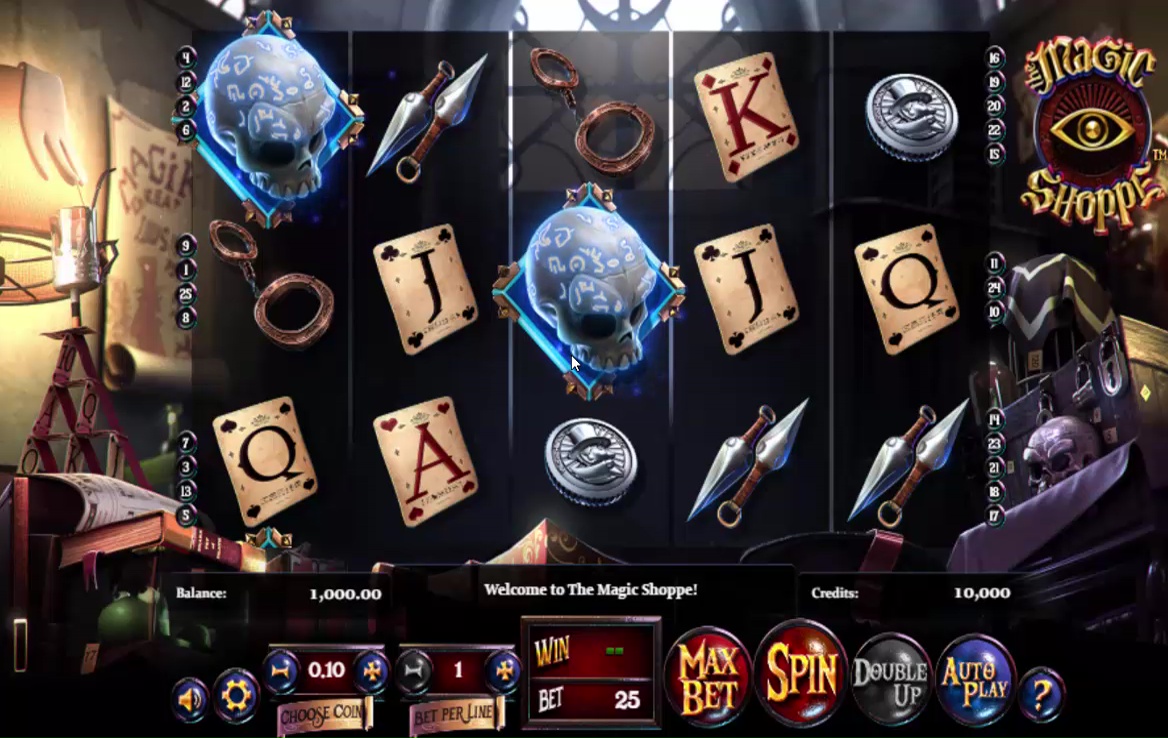 You should expect from Magic Shoppe to offer you a total of 25 active lines for each round, without giving you the option to select only some of those. You do get to pick the wager for each of those lines though, and you can start from a minimum of $0.01 and take it up to $5. You may have up to 5 coins on each line, with the denomination up to $1. The total bet can reach a value of $125, but the starting point is at only $0.25.

Magic Shoppe gives us a good idea of the place where the action takes place, just based on the title. We have the image of the magic store in the background, a dark place where there are all sorts of spooky items stored and ready to be sold. You have locked up boxes and human skulls on the right side of the background image, while on the left you get posters announcing magicians, candle light and books. There isn’t a lot of light in the image, so the slot ends up with a dark design. When it comes to symbols that were selected for use in Magic Shoppe, the choice was made to rely on things like poker cards for the ones that pay less, but to make them actually look like playing cards, not just letters or numbers. For the better paying symbols and features, the images are of things like skulls, daggers, handcuffs and top hats, things that you could actually imagine a magician using on stage, in one way or another.

The Wild Logo is placed inside a metal ring. Even though it’s not the best looking symbol of the game, it will offer the best payouts that you can expect from it, so it’s the one you will want to see as often as possible. You get paid up to 2,400x, so as much as $12,000, when forming a combination of five wilds. When not forming combinations with other wilds, it can be used as a replacement if it appears on a line where you need another regular symbol in its position. Wild symbols can’t replace scatter or bonus symbols, only regular ones. The Magic Wand is the trigger for a feature that brings you wilds to the reels. These are scatters, which need to appear a minimum of three times before you get their reward. If the requirement is met, you will find that all visible scatter symbols are transformed into wilds. Finally, we get to the Sun and Moon Free Spins. There are two different scatter symbols here, which can be used to trigger two types of free spins. We get the Sun Box on one side, colored in orange, while the Moon Box is coming in blue. You get 3 to 12 free spins, either from the Sun Boxes or from the Moon Boxes. The spins offered here have guaranteed wins, so you will definitely walk away with prizes from them. There is even the option to retrigger free spins, though you need another set of 3+ identical Boxes to do that. Besides the wild symbol that pays the big prizes, I’d say that the free spins are my favorites here. Free spins might not cost you anything, but in a lot of games they can also bring you nothing if you’re unlucky. The wins here are guaranteed though. 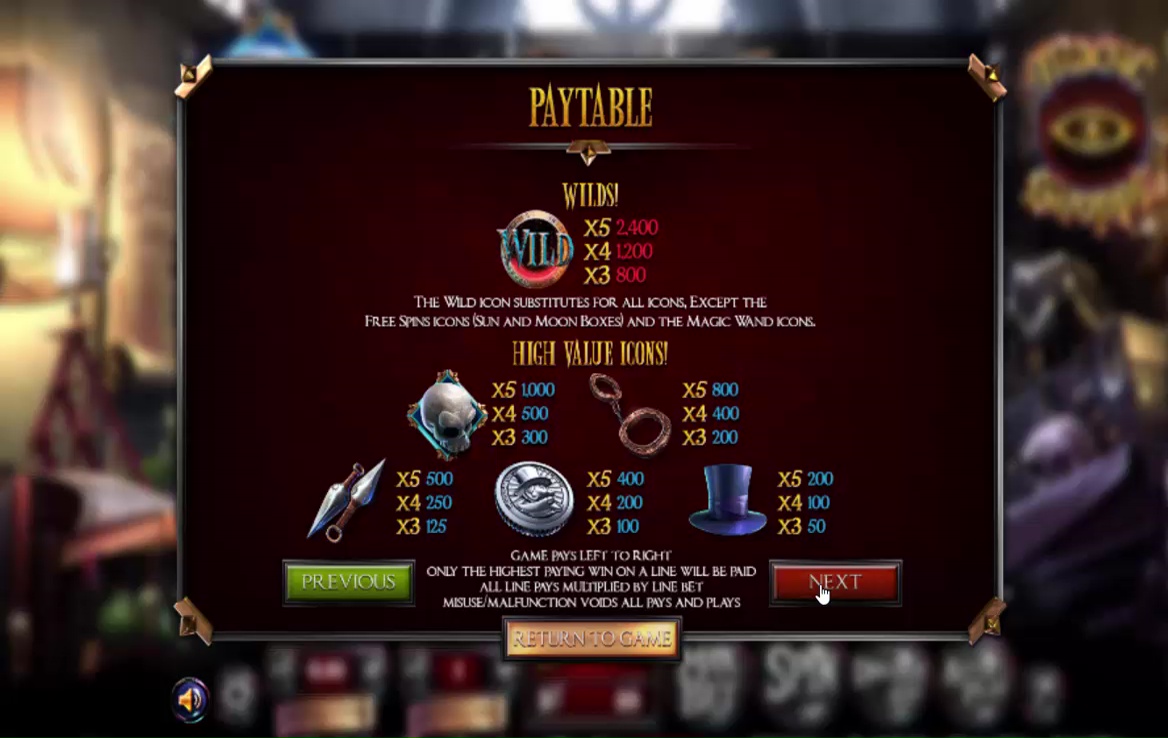 The jackpot in Magic Shoppe is delivered through the wild symbol, whenever it happens to appear five times on an active line. The payout of 2,400x the line bet can be turned into a reward of $12,000, as long as you were using the highest possible wager that spin. As far as the average RTP goes, I’ve found different numbers for this game, which is still new, but it seems to revolve around 96%, which is a good figure for a slot machine, one that should allow you to stick with it if you like the theme and the features.

Magic Shoppe is a different type of magic themed slot machine, and that might be enough to get your attention. It will try to keep it with its features, which are a bit different from those that you’re used to. 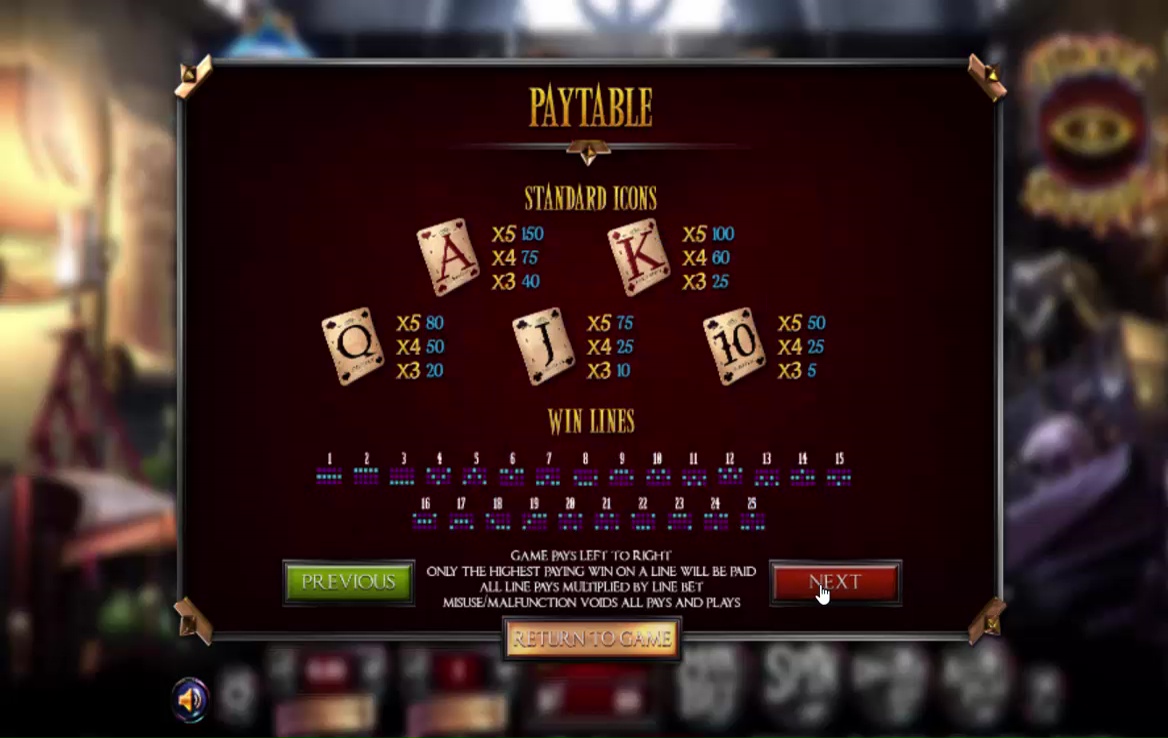