Ireland’s culture and legendary lucky items have been the focus of countless slot machines by now, and Playson’s Clover Tales seems at first like just one more game to add to the pile
Play Clover Tales
6.8Total score
Bonus rounds7.5
Graphics6
Soundtrack7

Ireland’s culture and legendary lucky items have been the focus of countless slot machines by now, and Playson’s Clover Tales seems at first like just one more game to add to the pile. Once you take a look at it though, I think that you will find that its theme might be boring, but the implementation of the design is one of the best that I’ve seen in this particular niche. A game that has only 9 lines to offer, Clover Tales will sport the usual number of reels, 5 of them and with 3 symbols present in each column. With a top prize of $2,500 offered, it might not sound like a great offer at first, but you have to keep in mind that it also has features to offer, easier to trigger than in other slots. You have wilds that expand on their reels, as well as free spins and re-spins. 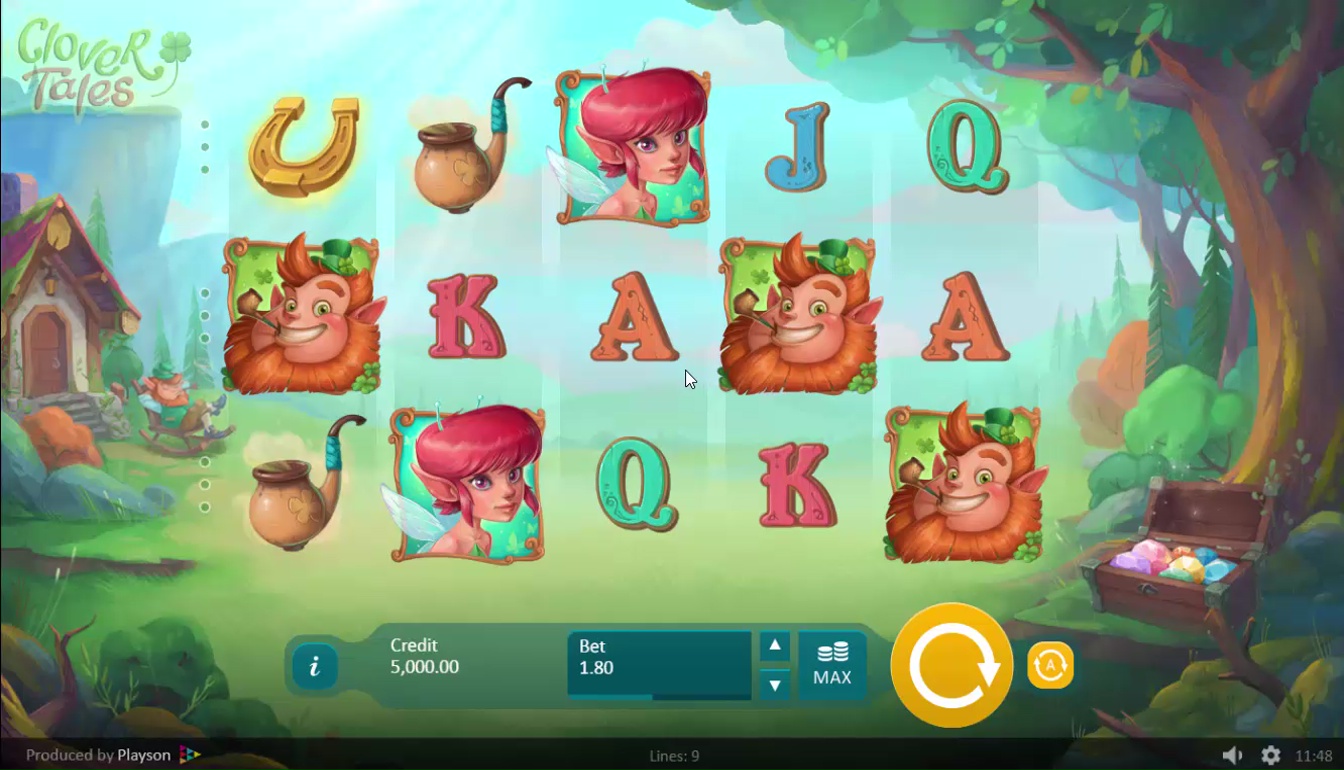 Placing your bets is easy enough, especially since you don’t choose how many lines are active each round. You always get 9 lines, while the game asks you to pick the total bet only. The smallest possible value per spin will be $0.27, so each line receives $0.03 in that case. As for the highest bet, it’s going to require $10 per line, so $90 total. It’s a standard range for a slot machine, and it allows players with different budgets to play it, so there is nothing to complain about in this case.

A game that’s about the Irish will usually revolve around a couple of things. You have a story about a leprechaun for one, along with pots of gold, rainbows and other similar items that are inspired by this character or about its story and how he hides his treasure. On the other hand, you can also have fairies, four leaf shamrocks and other things that are considered lucky. Add a touch of beautiful nature, and you get the full Irish experience. In the case of Clover tales, you seem to get a little bit of everything in one place. It starts from the background image, where Playson added a beautiful green meadow, with a forest on one side and with a leprechaun’s home on the other. You even see the leprechaun, relaxing on a rocking chair, while smoking from a pipe. If you switch to the reels, the symbols that you have there will start from the Pot of Gold, then there is the Fairy, the Leprechaun, a Lucky Horseshoe, a Pipe, a Shamrock and four poker cards with a bit of a Celtic inspiration in their design. It’s one of the more enjoyable designs that I’ve seen in this category, one that is over-populated with leprechauns and pots of gold. Yet, Clover Tales manages to offer a better look than most, and for that I give Playson props, even though they lacked imagination with their theme choice.

Though there is nothing unheard of when it comes to features, Clover Tales does trigger some of them differently than other slots do, so there is something unique to enjoy inside. The more regular feature is the regular/expanding wild, the one sporting the image of the Pot of Gold. Having it appear in just the right place can turn it into a substitute for another icon, and that way you can enjoy a payout that normally wouldn’t have been yours. A combo that is formed out of wilds alone, will have one of the highest payouts possible in this game to offer. This wild can expand as well, on the entire reel, but only if it appears on the Rainbow Line. While you’re in the base game, one of the nine lines that you’re playing with will be turned into a Rainbow Line. It’s a random choice, so it might change from one spin to the next. The wild symbols that appear on those lines and on one of the middle three columns are turned into expanding wilds, plus if you get a high paying winning combination on one you will also trigger an extra feature. There are two possible Rainbow Bonuses, the re-spins and the free spins. The Leprechaun and the Fairy are the two symbols that can trigger the free spins, while the Horseshoe, Pipe and Clover bring you re-spins. There are two free spins modes to activate. Both five you 5 free spins, but one has a Random Expand Wild (1 to 5 added to the reels each round) and the other offers a Wandering Expand Wild (a wild reel appears on the 5th column and then moves to the left each spin). The other feature that you can get on the Rainbow Line is the re-spin. There are two types of re-spins here as well. You can get them with Frozen Wild symbols (locked in their position) or with Shifting Wild symbols (which change their position at random). 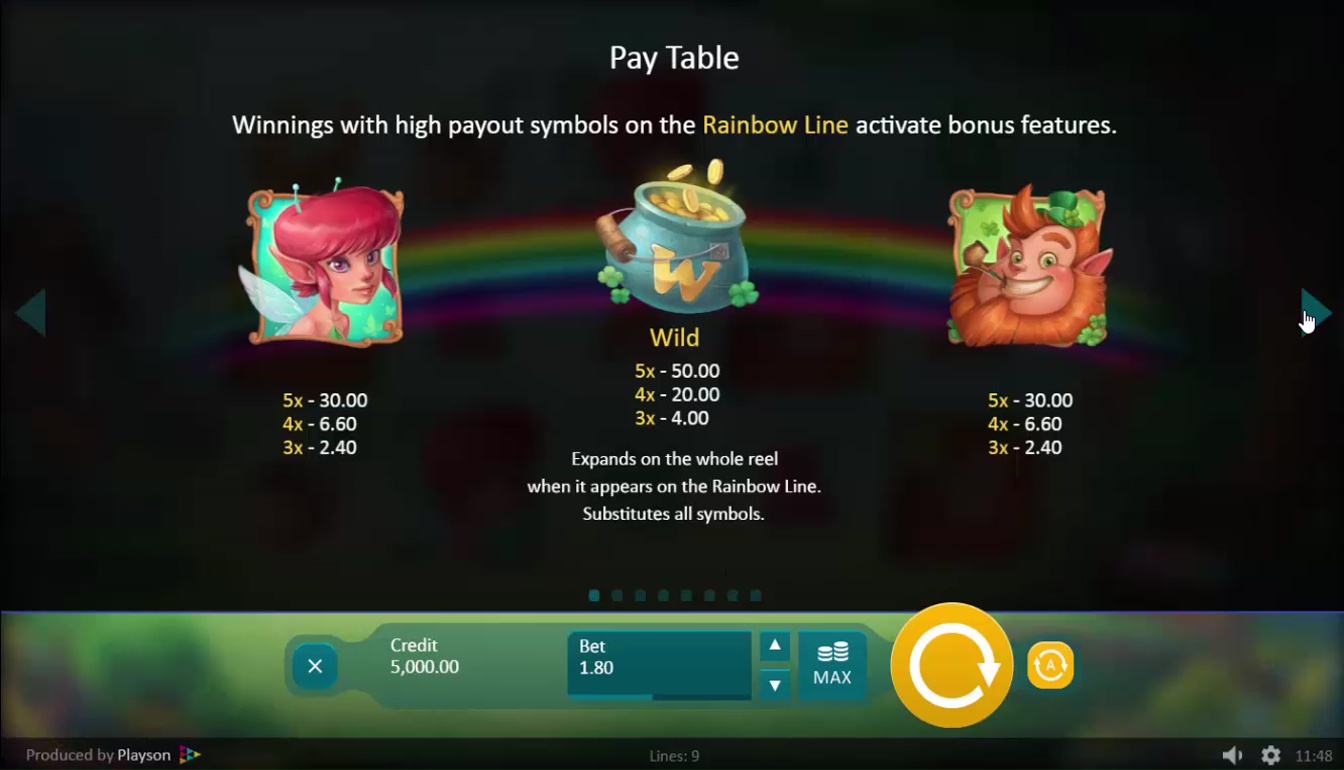 The Clover Tales top prize appears to go up to $2,500 only, but the game makes up for it with its various features that can be triggered through the Rainbow Line.

Clover Tales is one of the more exciting leprechaun themed slot machines that I’ve seen, with great visuals and with fun features being included. 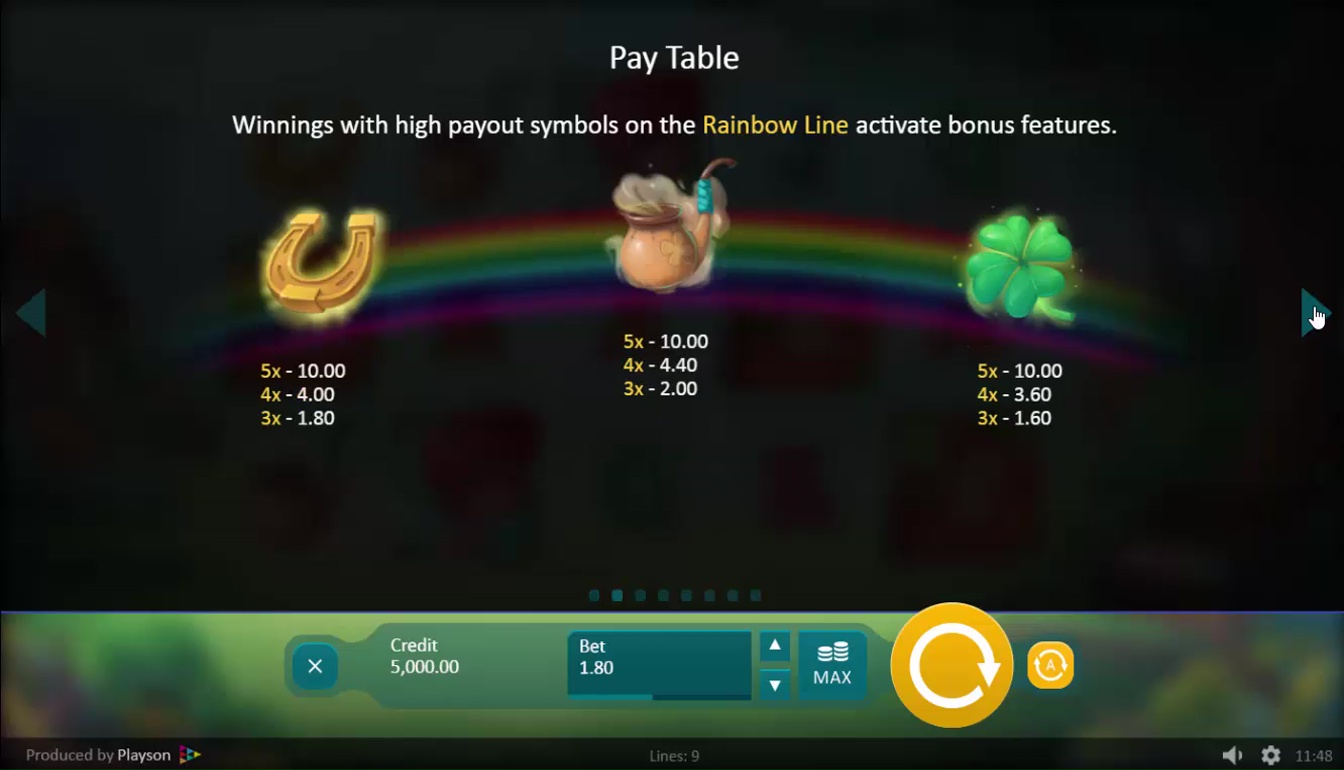