Mixing roosters and martial arts might not sound like the most obvious combination, but that’s exactly what Kung Fu Rooster tries. I have to say, RTG managed to put the theme in practice very well, and I ended up enjoying the design of the slot. The number of lines in Kung Fu Rooster stops at 12, which is not a standard number for a slot machine. The 5x3 reels which they sit on are the standard ones though. The wagers that are allowed in the game tend to be on the small side, so they can only bring you prizes of up to $12,500. The slot might sound more attractive if I mention that it also has a wild feature, a bonus symbol and something called Final Trials, which can get you up to 25 free spins. 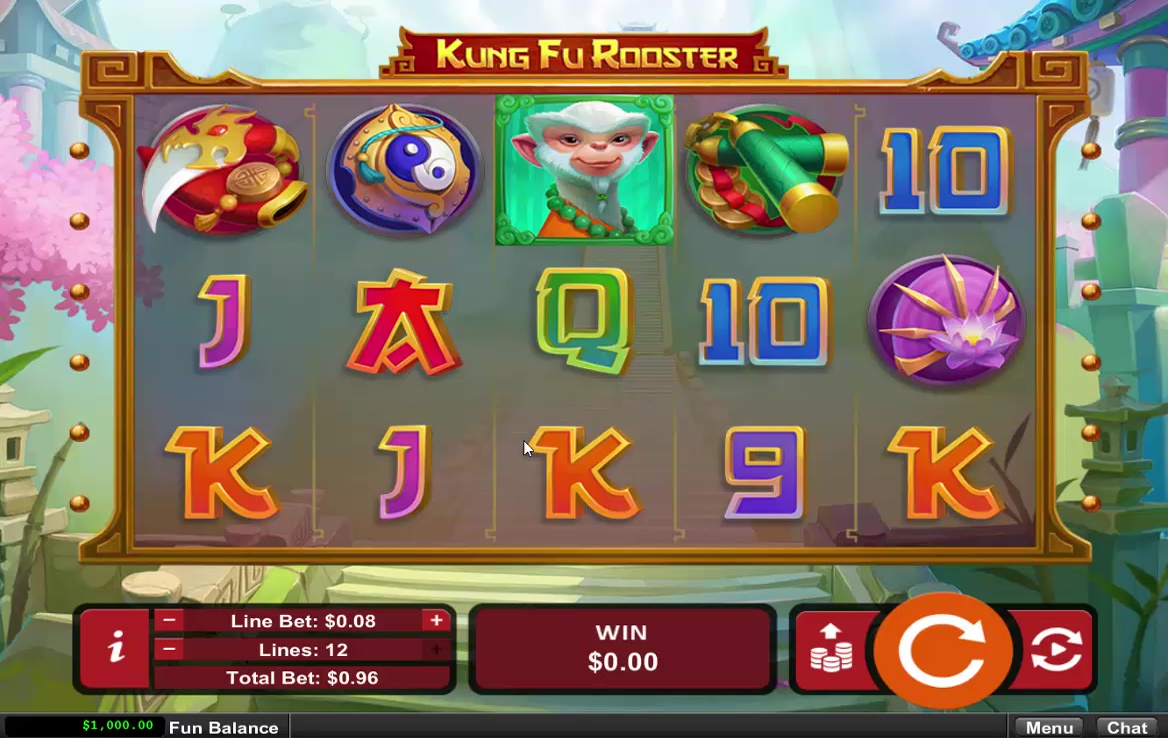 As I said, a game with 12 lines is far from the norm. I actually haven’t seen one before now. You can change the number of active lines as you please though, as long as it’s in the 1 to 12 range. Each of those lines will then get the line bet that you select for it. The minimum line bet can be valued at $0.01, while the maximum one can reach $0.25. The biggest wager that Kung Fu Rooster allows is worth $3.

China is a place from which a lot of recent slots have drawn inspiration from, some with more original stories than others. Kung Fu Rooster is one of those slots that actually have something unique to offer the player. In this case, it’s a focus on martial arts, with main characters that show us roosters and monkeys. The Rooster takes the role of the main character, while the Monkey is the white haired master that teaches him, same as in kung fu movies. All the action takes place in the vicinity of a temple, with long stairs leading up to it in the background. There are other temples and buildings on the sides. The symbols that were picked for the game are with images of the two main characters, but also of weapons like knives or nunchucks, of a pendant and of a lotus flower. The downside is that they end up with lower paying symbols that will show us Asian style poker cards, something that we get way too often from slots. I think that it’s going to be a highly enjoyable experience for most, and RTG appears to have poured a lot of effort into it.

The two main characters that practice martial arts, the Rooster and the Monkey, are also the ones to hold major roles as features. The Rooster is the wild symbol, while the Monkey is used as the scatter. A very happy looking rooster is watching you from the wild symbol, which is the feature that resembles the ones from other slots most. A wild may be used together with all sorts of other symbols, provided that it lands on the right line and next to matching symbols. Wilds can also act like regular symbols and form their own combos, bringing you wins of 2,000x or lower, depending on how many are arranged from left to right. Next, there is the matter of that Bonus Monkey, which you use as a scatter and as a trigger for a special feature called Final Trials. Having two to five Monkeys on the reels, even if they’re not aligned on any line, will bring you a reward that is between 2 and 100 times what you invested into the game for that spin. Once you get to those free spins, there will be as many as 25 rounds available. You will not get the bonus symbol to appear during these spins, so they can’t be retriggered. There is a chance that along with the free spins there will be a secondary feature active, one that is called Fire Claw. It’s a growing multiplier, that starts at 1x for the first spin, 2x for the second and so on, getting even up to 25x if you have that many free spins. 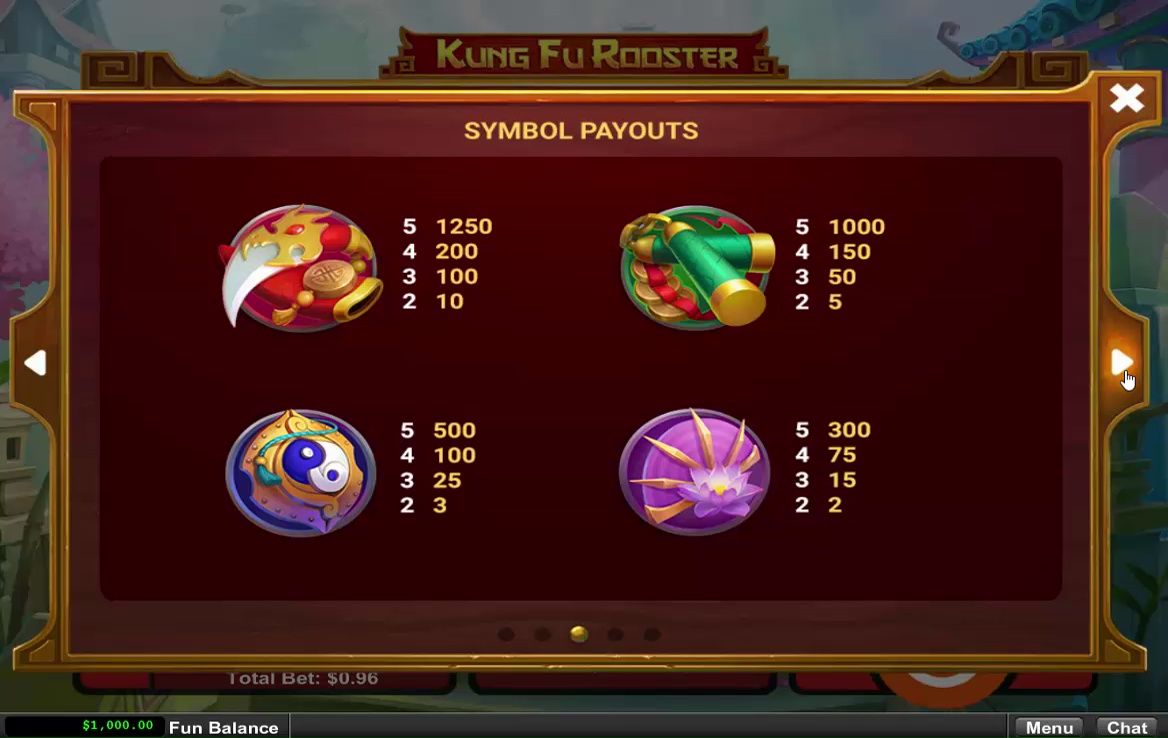 As a top prize, there are 2,000 coins offered in the base game of Kung Fu Rooster, which can be turned into $500 cash due to the low value of the coins used here. There is a way to get that prize to a significantly higher value, but there are two things that have to happen. First, you need to trigger the free spins. Second, you need a random feature to start up as well, which gives you 1x to 25x multipliers for the duration of the free spins.

Kung Fu Rooster has a design that I think will be enjoyable for most players, along with features that promise to make the game exciting. 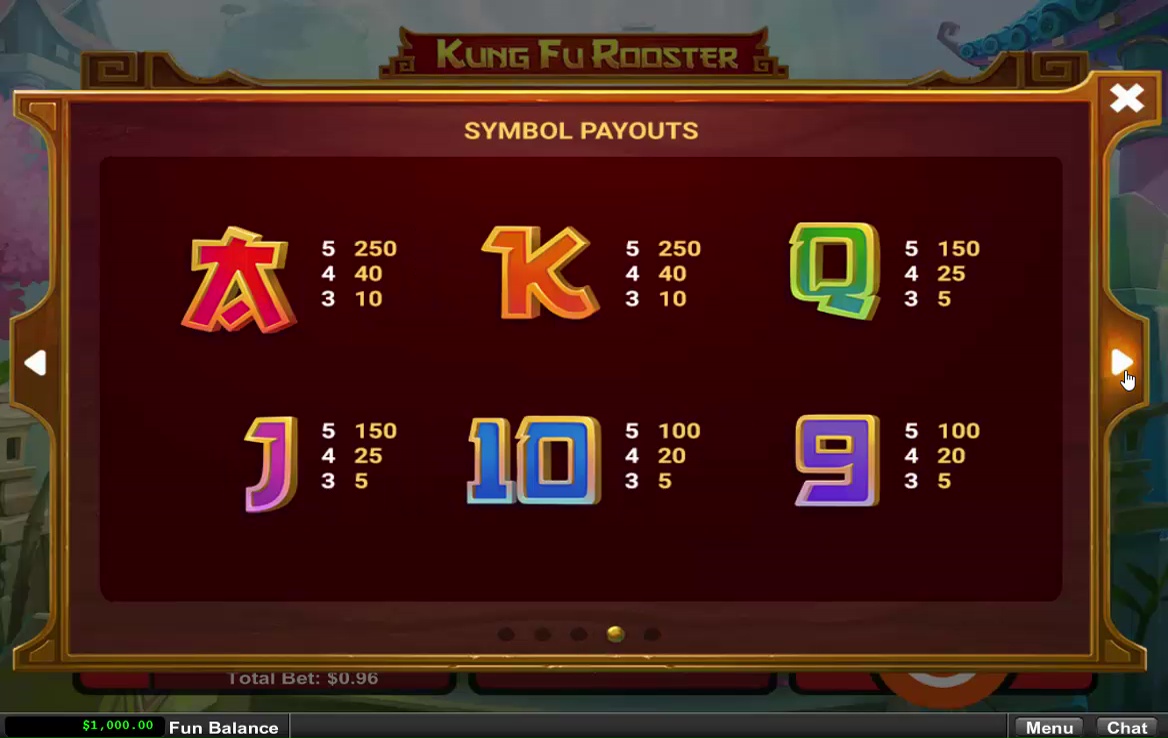