Aliens, the game from Net Entertainment, was built based on a movie that was released in 1986
Play Aliens
8.4Total score
Bonus rounds9
Graphics8.5
Soundtrack8
Fun factor8 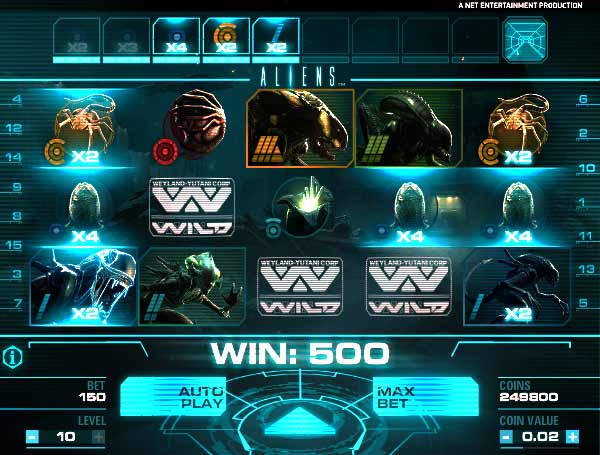 Aliens, the game from Net Entertainment, was built based on a movie that was released in 1986. It was the second film from the Alien franchise, and it took the fight back to the aliens. It still had Sigourney Weaver in the main role, and she was accompanied by marines. Net Entertainment obtained the license and created a slot machine based on the film, featuring images of the aliens only, no humans. They went with a modern design, changing their interface for this game and doing a very good job overall. It’s not an unusual layout, with 15 fixed lines selected for 5 reels. You can get paid up to $10,000 by the regular combinations, and along the way, as you play the game, you will find that it has wild symbols, multiple levels that you can advance through and a story that eventually has you fighting against the Queen Hive of Aliens.

Net Entertainment generally uses a certain interface for its games, and it doesn’t change it much. It certainly changed for Aliens, turning into a futuristic interface which uses hologram technology. The core of the betting system hasn’t changed at all though. You still work with fixed lines, like in all their recent slots, and you still have that Level for the bet, which determines the number of coins to be used per line. The Level goes up to 10, and each of those coins will have a value within a range of $0.01 to $1. The largest possible bets can get to values of $10 per line, or $150 total. The minimum bet is at just $0.15 though.

While in the first film, Alien (1979), a human ship accidentally picked up a dangerous alien which ended up killing almost all of them, with the second film the humans took the fight back to the planet where it was picked up. The film was called Aliens (1986), and it had the same main character as all the other films from the franchise, Ellen Ripley, played by Sigourney Weaver. We actually see the marine ship coming in for a landing, in the intro video for this slot machine. The good part about the design of Aliens is that Net Ent did an excellent job with it. It’s a futuristic design, one that looks ready to be played right now. They didn’t go with a dated design, and they didn’t use 80s style graphics for the slot, which is a plus as far as I’m concerned. There is a downside as well where this game is concerned though, and it’s the fact that you don’t have any humans shown on its reels. The symbols give you either logos, or alien creatures, in adult or infant form. There are five adult aliens and five smaller versions for each one.

The logo of Weyland-Yutani Corp is part of the wild symbol. The reels 2 and 5 can get this wild feature while you’re on Level 1 of the game, while for Level 2 it can appear at random on all reels. As wilds, these symbols are used to substitute for all other regular symbols that are needed in that same position. Level 1: this is the level at which you start the game. You have an Alien Activity Meter, which takes into account the symbols which form winning combinations (not the wilds though). The meter will display multipliers of up to 5x for each type of symbol. To reach the second level, you need this meter to get to its maximum. Level 2: once you reach the second level, the aim is to get the Queen Hive, fighting your way through Alien attacks. You have limited ammunition, so it can happen that you will run out of it before you get to the final stage. The multipliers that have been collected on the first level will be usable here as well, for the symbols that have them. This part of the game has an Ammo Clip Reel. You can get random Ammo symbols on the middle position of the reels, and you collect them, getting re-spins triggered. Each round that you defend against aliens will consume one ammo clip. Complete level 2, and you can get access to level 3 of the slot. Level 3: this is the final stage, the one where you actually go against the Queen. The Queen has a health meter, which shows you the amount of damage that you’re making. A total of four steps are part of it. The rewards offered as part of this level are based on how much damage you make. Kill the Queen, and you get a reward of 3,600x. At this point you’re using ammo clips and grenades, as well as multipliers which increase the damage by up to 10x.

Even though we don’t get to see Ripley on the reels, the aliens are very well designed and the dark atmosphere of the game fits it perfectly. I quite enjoyed playing it, even though its multiple levels can be difficult to understand at first, being quite different from any regular slot machine.