Thunderstruck II is a sequel obviously, created based on another slot machine offered by Microgaming, one which was launched back in 2004
Play Thunderstruck II
7.3Total score
Bonus rounds7.5
Graphics7.5
Soundtrack7

Thunderstruck II is a sequel obviously, created based on another slot machine offered by Microgaming, one which was launched back in 2004. It was incredibly popular over the years, and so the second installment of the series was released in 2010. It’s already an old game if you compare it with any of the more recent titles, but it still has a lot to offer and it remains a popular choice in Microgaming’s collection. This game is going to deliver its winning combinations through 243 ways to win, it will have the usual 5 reels of regular size, and it will pay as much as $15,000. The game has enough great features to be an attractive option, including here its wild symbol, multipliers, scatters and four different types of free spins, each one with its own benefits. 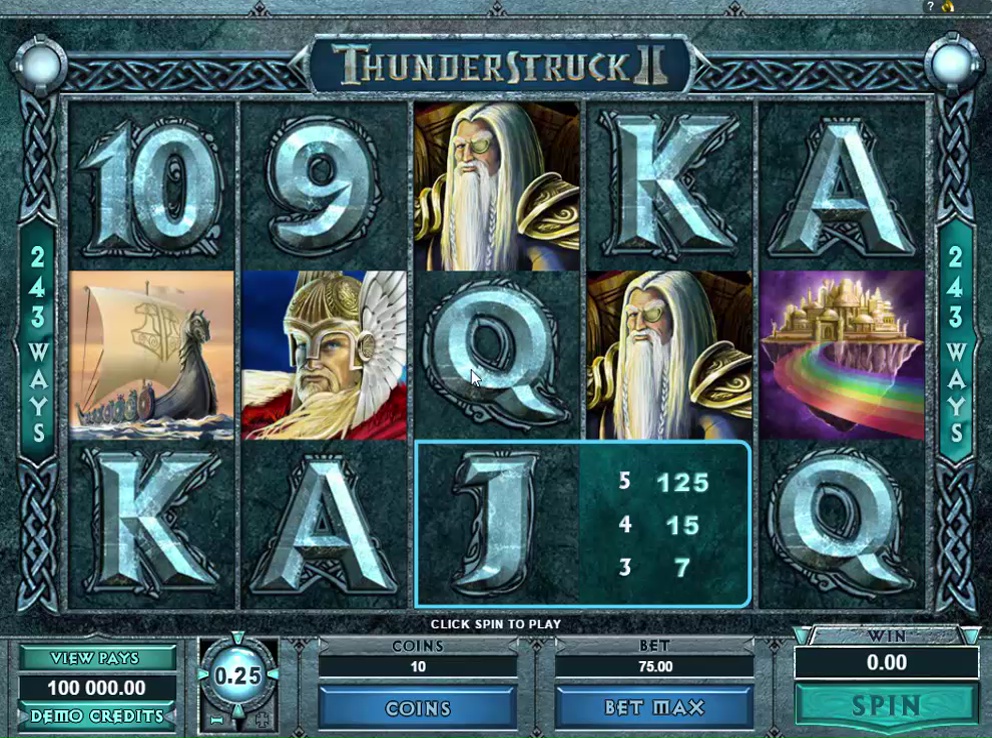 You will wager on 30 lines, even though the slot has 243 ways to win. It’s the number of lines that they decided would be sufficient to cover every potential win. You can spend as many as 10 coins per line, plus you can change the value for them as needed, as long as you stick with the relatively small range of $0.01 to $0.25. You end up spending up to $2.50 on each virtual line, and up to $75 for all of them.

The theme in Thunderstrick II, just like in the previous game, is about the legends of the Vikings. You’re going to meet characters like Thor, Loki, Odin and Valkyrie on the reels, all of them familiar names to most people. They’re especially well known these days thanks to the popularity of the movies that were released based on them in the last decade. Thor’s hammer, Asgard or the Viking longboat are some of the other symbols present, along with six Royals which are made out of some type of metal. Given today’s standard when it comes to design, I can’t say that I’m particularly happy about the look of Thunderstruck II. It’s a slot machine with a dated look by now, so there are other elements to make it appealing to the player.

Thunderstruck II will give you more features than the regular slot machine, and that’s one of the strengths that have made it such a popular choice. The list will start with the wild symbol, as always, the one that pays you the most with its combinations and which is capable of acting as a substitute as well. You will get double the usual wins if a wild symbol is part of a winning combination. You will not get it as a replacement for a Thor’s Hammer bonus symbol, but otherwise it will work with every other regular icon. Sometimes, as you play the regular game spins, you might trigger a feature called Thunderstorm. This feature will transform up to five reels, turning them into wild reels. The scatter symbol, Thor’s Hammer, is responsible for bringing you to the Great Hall of Spins. Here you will find up to four types of free spins that you can trigger, but in order to unlock them you need to get this feature multiple times. The more loyal you are to the game, the better the free spins that you get access to. At first, all you will have will be the Valkyrie free spins, with 10 rounds and 5x multipliers applied to all your wins. After five triggers of Great Hall of Spins, you get the Loki rounds as well, with 15 spins and with a Wild Magic feature which transforms symbols intro extra wilds. After the 10th trigger of the feature, you get Odin’s free spins, with 20 rounds and a Wild Raven feature (up to 6x multipliers possible). The 15th trigger will unlock the Thor free spins. Thor has 25 free spins for you, with Rolling Reels which have up to 5x multipliers. 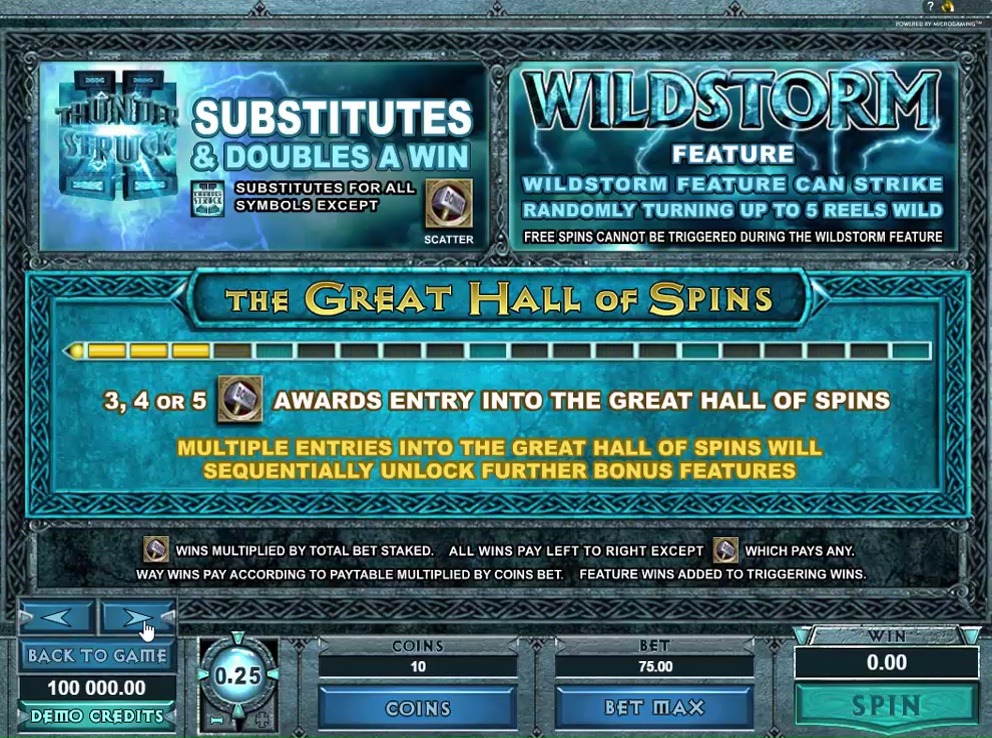 Thor’s Hammer, as a scatter, will pay quite a bit, up to $15,000, or 200 times the wager of that round. Out of the regular symbols, you can rely on the wild symbol to pay you the most, up to 10,000 coins, or $2,500. It’s an amount that can be increased, even up to $15,000, depending on the multiplier triggered during free spins. The game has its average RTP at 96%, so despite its fun features it doesn’t pay more than the average modern slot released these days.

Thunderstruck II is as fun as the original game, but by now it is no longer considered a modern title, and you will find a lot of better alternatives out there. 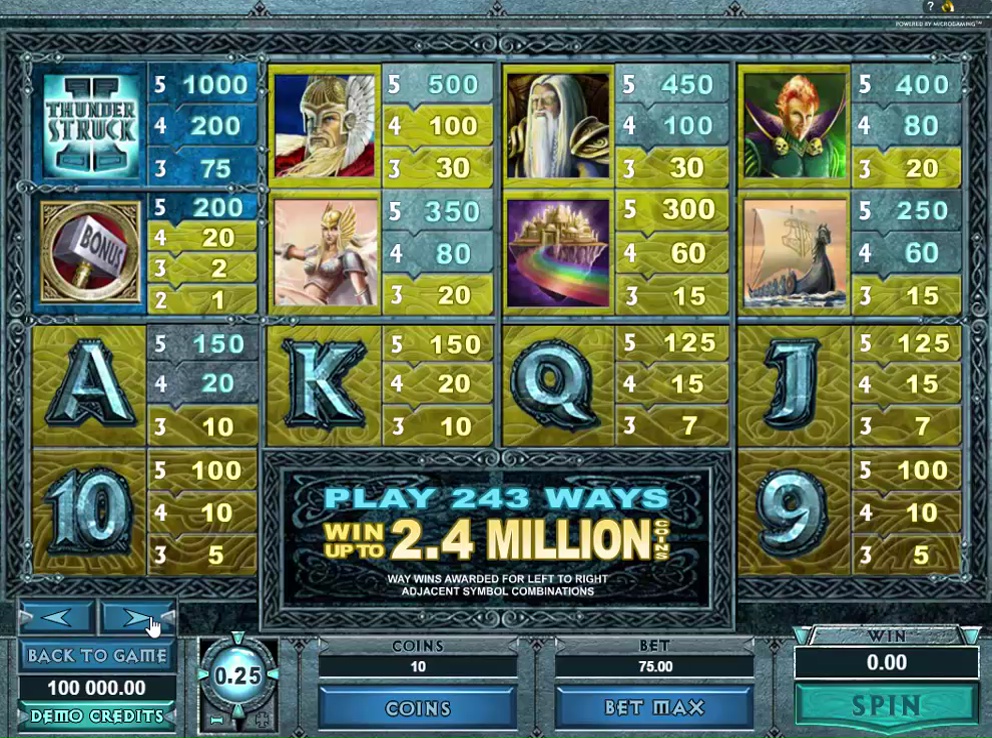