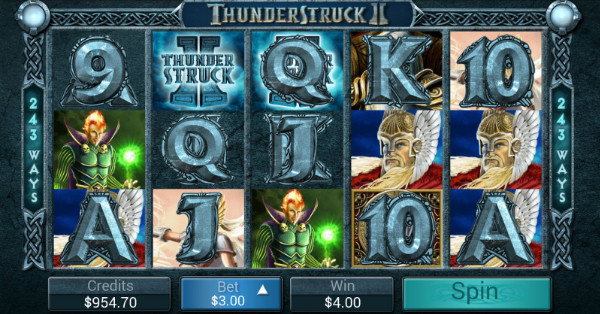 Thunderstruck 2 is one of the popular titles in Microgaming’s collection, a slot that builds on the success of another title of theirs, the first Thunderstruck game. The theme, in both games, is based on the Vikings and their legends. Thor’s hammer will make an appearance, along with various characters from those stories, with Viking longboats and so on. The look of the game is not as modern right now, but it still works. Your combinations and wins will come through 243 ways to win, or pay lines if you want to call them that. Besides the regular symbols and their rewards, the game also delivers substitutes that double your wins, scatter symbols that trigger The Great Hall of Spins (with multiple types of spins) and a random Wildstorm feature. Big rewards are possible, though that’s mostly during certain free spins, where large multipliers are used. You can get up to 60,000 coins there, the value being at $15,000.

Microgaming asks us to use a bet that will cover the equivalent of 30 win lines, which they consider sufficient to use instead of 243 ways to win, which would’ve been more difficult to place wagers on. The bets that you’re about to use will have between 30 and 300 coins in them, with 1 to 10 coins selected for each line. Their value doesn’t go higher than $0.25 though, so you spend at most $75 per round.

The theme has to do with Vikings and with their gods and warriors, so naturally there will be plenty of players that will enjoy the topic. It’s by no means a theme that needed a new slot machine done for it, there are a lot of them out there, but thanks to what it offers I’m glad to see it anyway. Thor and his hammer have a place among the symbols, accompanied by the Valkyrie, Loki and Odin, some of the big names from the Viking mythology. We get a look at Asgard and at a Viking longboat as well, and then the list concludes with some Royals which appear to be made out of metal. The design delivers just enough to do its job, which means that I’d consider it average at best. It’s an older game though, so I don’t have the same expectations from it as I have from the newer Microgaming titles.

Wildstorm is the name of the only feature that the game can offer at random, without any trigger from the symbols that are on the reels. It’s going to strike reels at random, turning up to five of them into wild reels. You can’t trigger the free spins while the Wildstorm feature is active. With the Thunderstruck II logo, you will be able to form the better paying combinations of the slot, up to 1,000x offered in exchange for five of them on just as many reels. Since the ways to win are used, it’s sufficient if the wilds are on consecutive reels. Other than that, this is going to be a regular wild feature, which will give you double the usual win when substituting in a regular combo. It will not be a substitute for a scattered Thor’s Hammer. Speaking of that Thor Hammer, Mjolnir is its name, and it will be part of a minimum of three reels during the rounds where you trigger the free spins. It’s actually a Great Hall of Spins, one where you can advance and get better rewards, if you manage to trigger it multiple times. It’s a reward for the loyal players, which can unlock the new features if they stick with the game. The first time you trigger the Hall of Spins, you’re going to get Valkyrie’s Free Spins. 10 rounds are available, with multipliers of 5x applied to all wins. Once you’ve triggered the feature five times, the next feature is unlocked, the one governed by Loki. He gives you 15 free spins, with a Wild Magic Feature active. It’s a symbol that is reserved for reel 3, which transforms other symbols into wilds. Odin is the character that brings you 20 free spins with a Wild Raven feature, starting from the 10th trigger of the Great Hall of Spins. The ravens will appear and will transform at random symbols, into multipliers of 2x and 3x. If both ravens land, the multiplier jumps to 6x. The final option comes from Thor, and it’s reserved for players that have managed to trigger the feature 15 times. There are 25 free spins offered here, which have Rolling Reels and multipliers of up to 5x available for the consecutive wins.

Since the highest line bet is at $2.50, the biggest reward available for the paid spins gets up to 1,000x, or $2,500. It gets a little better during certain free spins, with multipliers of up to 6x bringing the jackpot up to $15,000. The RTP is on average at 96% for both Thunderstruck slots.

It is a popular game, and for good reason if you look at its features and its rewards for the loyal players. There are some average things about it though, like its RTP or its graphics, so I don’t expect everyone to like it.