The name of this slot, Isis, is a bit unfortunate these days, thanks to real world events, but at its basis this was what one of the Egyptian gods was called. The connection with Ancient Egypt is unmistakable, as you will discover yourself, since most of the symbols and decorations in the slot are connected with that time period and civilization. Isis gets 25 active lines at most, you can spin 5x3 reels to get your winning combinations, and the prizes that you can land reach a maximum value of $300,000. It’s a generous game, both in terms of payouts and in features, where you’re getting things like free spins, multipliers, wilds and scatters. 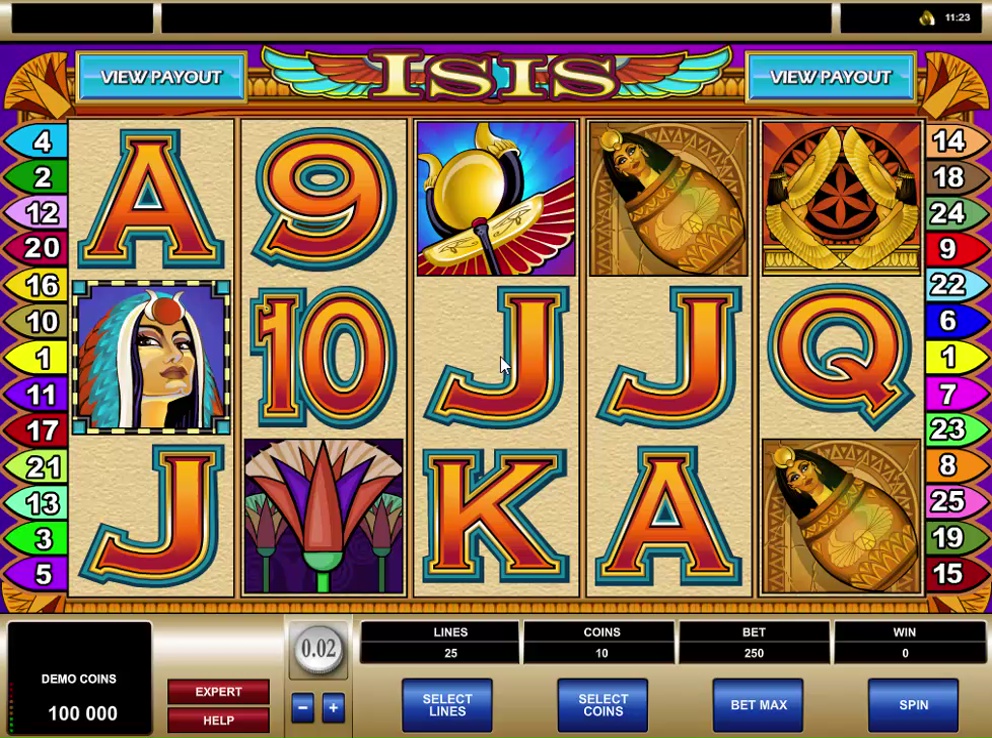 This is the kind of game where you’re getting full control over the way the bets are formed. You can change the number of lines for example, up to the maximum of 25 available. Another betting option is the one that allows you to modify the number of coins that each line gets. Finally, you have the coin denomination, with a range for its value that goes from $0.01 to $0.50. With all those options combined, you will find that you can place bets of up to $125.

The inspiration for Isis, the slot machine, comes from the goddess of Ancient Egypt which had the same name. She was the goddess of wisdom, marriage or health, and you will see her among the symbols selected for this game. Other symbols chosen include the eagle that represents Horus, along with the Eye of Ra, lotus flower drawings, canopic jars and a couple of other related images. There are Royal cards as well though, half a dozen of them, and all colored in a dark yellow. It’s not the greatest looking game you will ever see, not even close. It doesn’t even compare too favorably if you put it alongside another Ancient Egypt slot machine, at least when it comes to the better ones. The choice of symbols is slightly better than average, since it has some which are unique in this category.

The features of Isis are the expected ones, but they do look better than in the average slot machine that employs them. That’s true of pretty much all its features, which will be triggered via two different symbols, a wild and a scatter. Isis herself can be seen in the symbol which has the ability to act as the wild, and she is shown as a beautiful woman with black hair and with a feather headband on her head. A wild behaves a bit like a joker card, meaning that it can be used as a replacement for another symbol that you need in the same position as the one where the wild landed. Combined with regular symbols of the same type, present on the same active line, they can form a combination that brings you a reward. Having a wild symbol in your combinations is better than having ones which have only matching symbols, and that’s because there is a 2x multiplier applied by it, at least in this game. Wilds may only be used as replacements for regular symbols, forming combinations on active lines, so it doesn’t help out scatters. You can also land up to five wild symbols together, on the same line, in which case they will form a combination and pay you directly. They pay the highest amount in the game, out of the regular symbols at least, delivering up to 10,000x back to you. Second, we have the image of a Hawk, representing Horus. It’s the scatter symbol, which will pay as much as 600x the wager, or up to 15,000x. To get that kind of payout, you need as many as five such symbols appearing at the same time, but there is no need for them to be together on a line. Having 3, 4 or 5 Horus symbols present, will also trigger a feature with 20, 25 or 30 free spins, in addition to the cash prizes I already mentioned. Even better, there is a 6x multiplier applied to your wins if you get them during free spins, which makes me just love this part of the game. 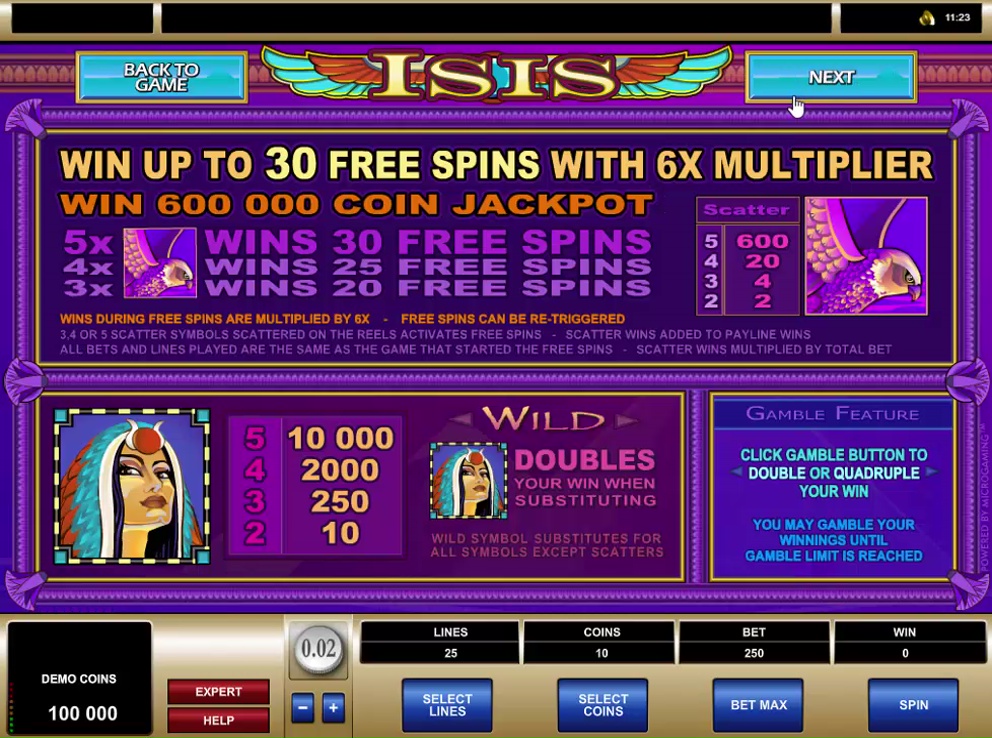 Taking home the absolute largest possible prize in this game requires that you land a specific combination, at a certain time. You need a combination of five Isis Wild symbols on a line, during a free spin. The base game’s top payout of 10,000x goes up to 60,000x at that point, which means that you can win up to $300,000 cash. Despite the huge potential payouts, the RTP of Isis is at 95.22%, which is not among the highest offered by Microgaming.

Isis is a game that you play mostly for its features and its huge potential wins, not for its interesting theme or superb graphics, because the latter don’t really apply here.