Fish Party is a game with an ocean theme, and with action that seems to take place in an aquarium or the ocean, with its characters being fish, starfish or worms. The choice of theme is not a very original one, but that doesn’t make its characters any less funny, plus there are other things that the game compensates with. The game that Microgaming created for us here is one which relies on the usual 5x3 reels, but which uses 243 ways to win on them, rather than the regular lines. The features look particularly inviting, as you will discover that the game has stacked wilds and scatters, as well as free spins which deliver super stacked wilds. There is a top prize of $7,500 that you can take home. 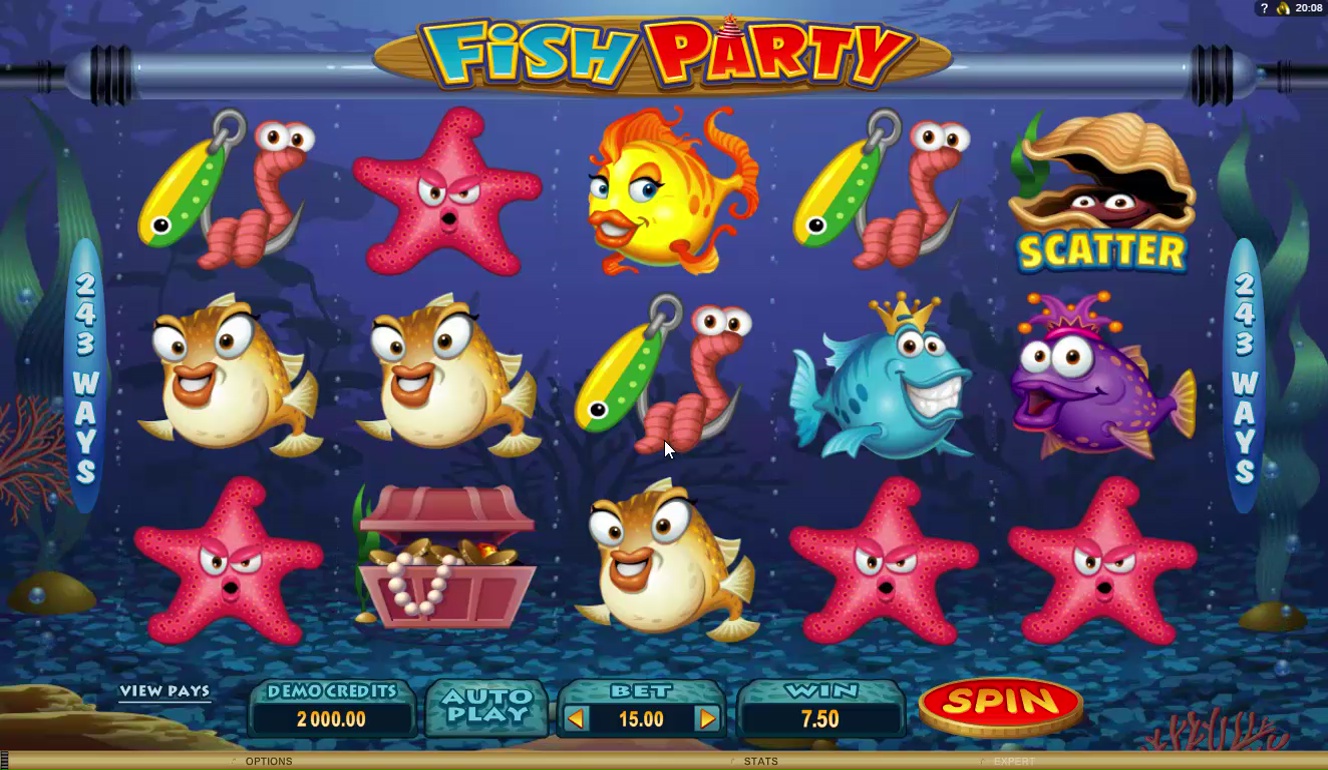 As I mentioned, the game has a system with ways to win, which means that combinations will form if matching symbols are anywhere on the reels, as long as they start from the left and continue on consecutive reels. You’re not expected to actually use 243 coins, since that would be a bit clunky, so instead they’ve implemented a system with 30 lines to cover all chances of winning. You use up to 10 coins per active virtual line, and you can set the coin size to a maximum value of $0.25. You can spend up to $2.50 for each of these lines, or up to $75 total. As for the minimum wager, you can check out the game and see how it feels like with as little as $0.30 per spin.

The game’s theme is placing the action either at the bottom of the ocean, or in an aquarium. On one hand, we have a castle that would normally be used as a prop in an aquarium, on the other we have a worm that’s used as lure by a fisherman, so that’s something that would happen in the ocean. Either way, you’re going to find a setting which shows you water plant life, along with various types of fish, snails, clams and starfish that you’d expect to get from such a game. It also has a bit of a king’s court theme going on, with one of the fish wearing a crown, with a symbol showing you a castle, while another one has a fish wearing a jester’s hat. The other creatures of the sea are regular ones, so they don’t have the same clothing items on them. The design style is a decent one, not a masterpiece but it’s not going to be difficult to play through either. You’re getting cartoon style characters for the various ocean creatures, most of them smiling at you. When they’re part of winning combinations, expect them to become animated.

Though for the most part you’re going to have regular features inside, meaning wilds, scatters or free spins, Microgaming made sure to design them in a more exciting way. An example of this is the wild symbol, which is appearing stacked on all the reels, which means that there is a very small chance that you could have all 243 ways to win with 5 wilds forming combinations on them. Each combination of five wild Fish Party logos will give you a reward that can get up to $2,000, if you’re using the largest bet. Naturally, you’re going to be using this symbol as part of other combinations, since it’s a substitute. You can’t replace scatters with it though. The free spins, which are available in most slots, have their own attractive things to offer, making them more exciting. You trigger 20 free spins by getting three, four or five Clam symbols in random locations at the same time. Besides the free spins, there is a prize as well that is offered, getting up to 100 times your wager for that round. As for the 20 free spins, they have super stacked wilds, so there are increased odds of getting more winning combinations formed. Besides the wilds, there are also four high paying symbols which are stacked during the free spins. You can even retrigger free spins, as long as you get the 3+ Clam scatters anywhere on the reels again.

The five symbols that can offer the best payout are the scatters, and they can give you up to $7,500 cash in one go. If you want more money, look for the stacked wild symbols, since their combinations can pay up to $2,000 and you can have quite a few of them forming at the same time. 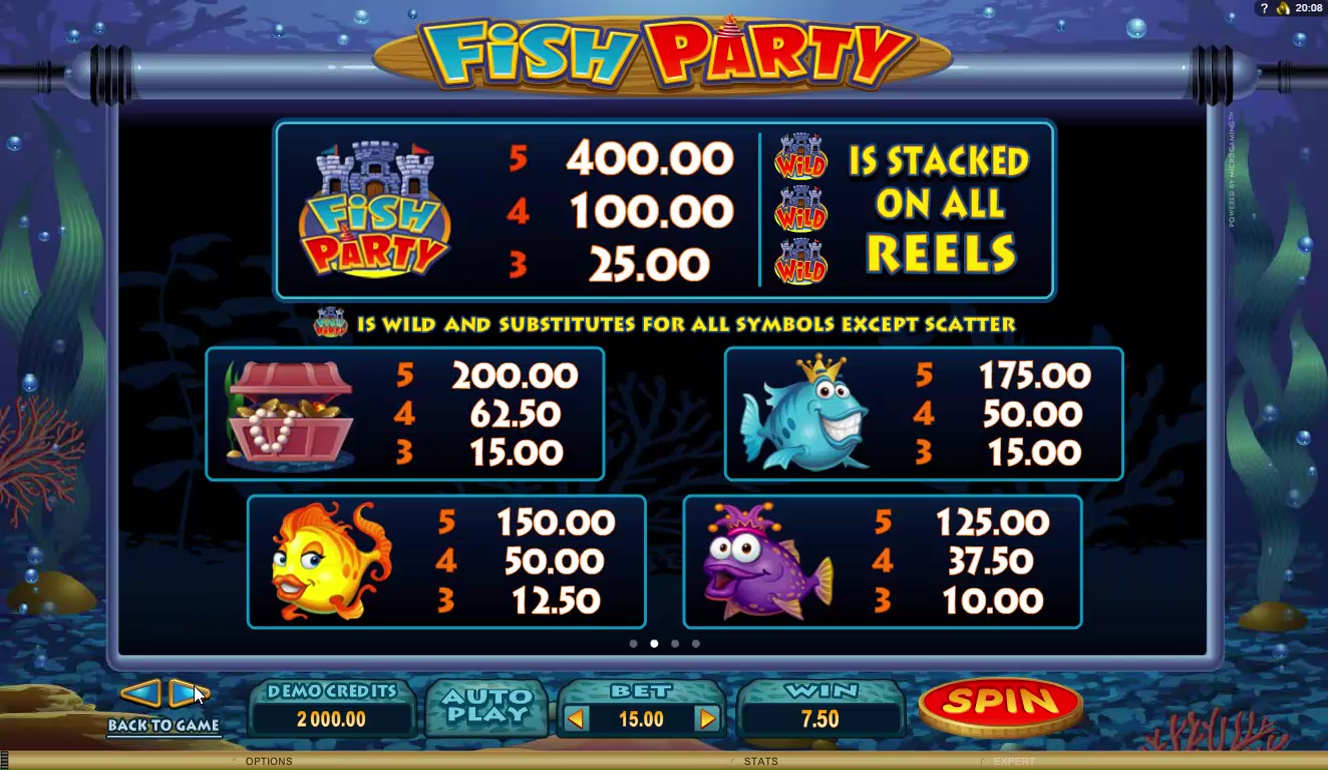 With an average Return to Player of 96.50%, Fish Party is a good choice payout wise, and you have decent odds of walking away with a profit.

As long as you enjoy the theme and the cartoonish design, everything else about Fish Party recommends it, from its RTP to its exciting features. 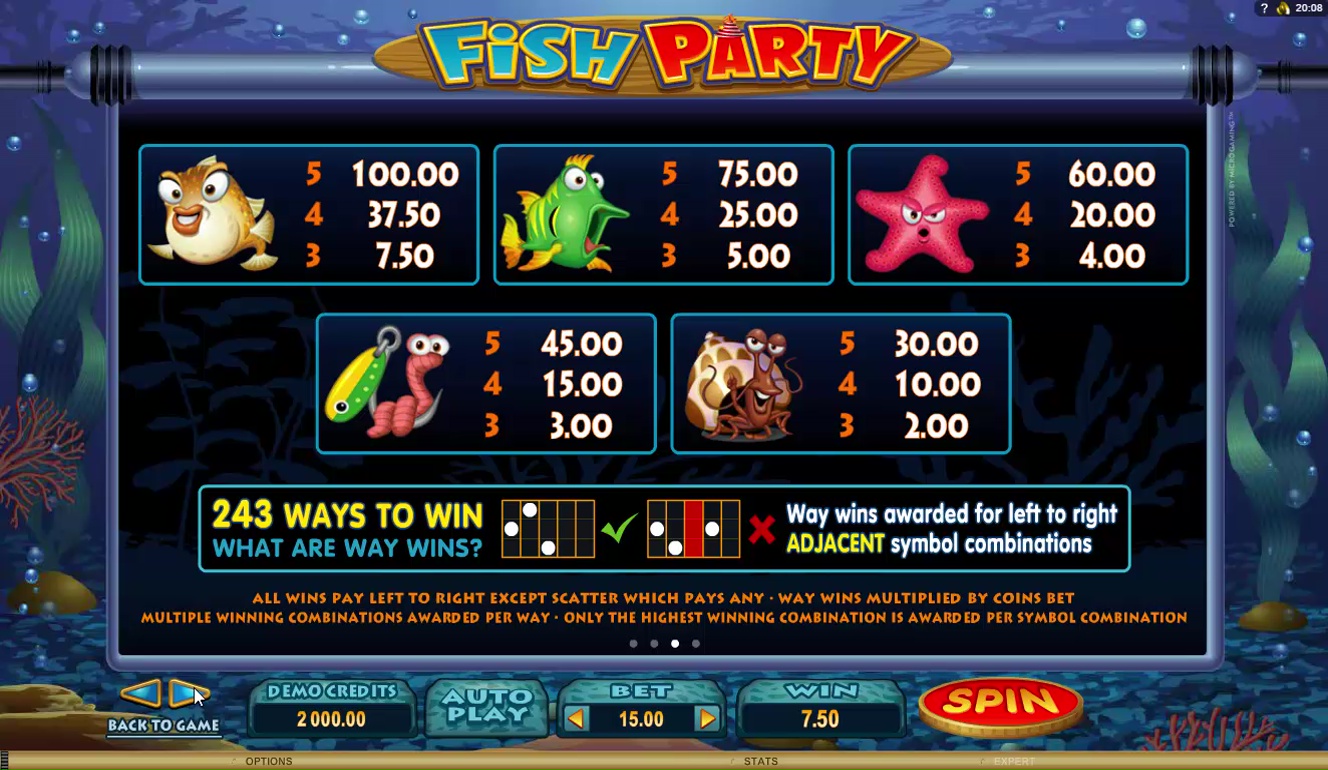