Cashapillar is mostly a game that focuses on nature’s smallest creatures, on the various insects that you might find if you looked closely at plants and the things that live on them. The game is being offered by Microgaming, and it’s going to be a pretty fun experience overall, with cartoon style graphics and a lot of symbols and lines present at the same time. You get 5 reels in Cashapillar, which is normal, but you also have 5 symbols on each one, so there is plenty of room for the slot’s 100 pay lines. Individual wins will get you up to $2,000, but they can cover all 100 lines in some situations, so you can get a lot of money anyway. The slot’s features include the wild symbols that are stacked and which have 2x multipliers, along with scatters, free spins and 3x multipliers. The game claims that wins of up to 6,000,000 coins are possible, which could mean $600,000. 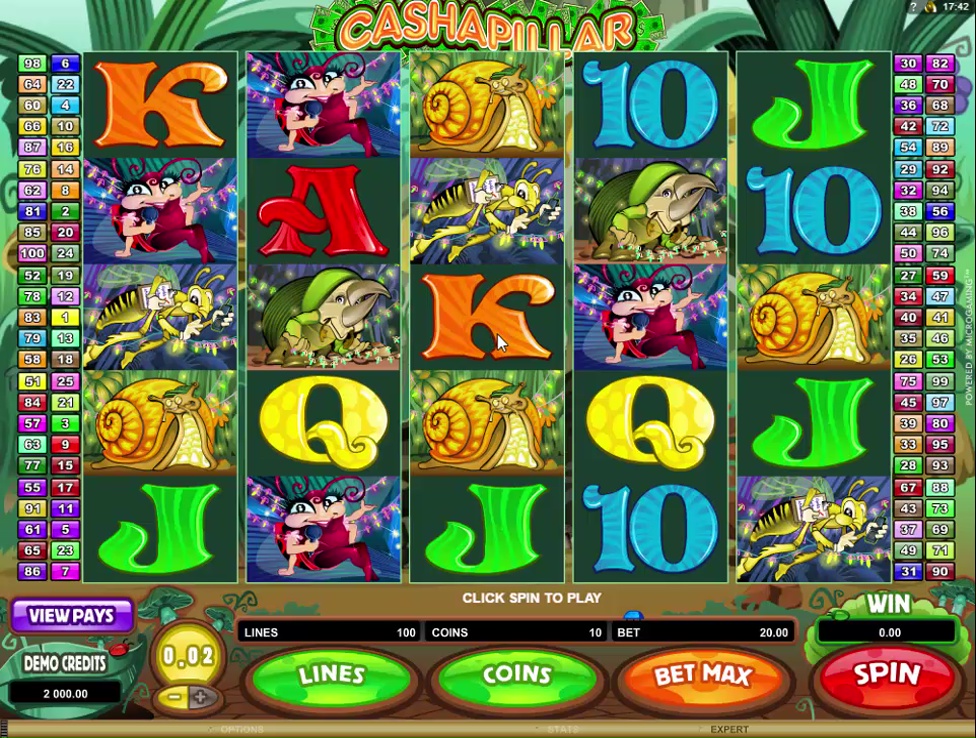 With 100 active lines, you’re going to have to place some serious wagers in order to cover everything. Up to 10 coins are possible for each active line, so your bets can have up to 1,000 coins in them total. The coin value doesn’t amount to much though, the maximum being $0.10, so you can wager up to $100 per spin.

Cashapillar’s theme is about the caterpillar, but that’s not all that it is. You’re also getting a nature focused game, where the symbols are mostly going to show you various cute bugs and insects. The location is apparently in the middle of nature, with plant life shown as if you were the insect, so everything is huge around you, even though a blade of grass would be only a couple of inches high in real life. The layout is not a usual one, featuring a lot more symbols per reel, and taking over most of the screen. The background image and the symbols shown on the reels are of good quality and they’re realized in a cartoon style. As the symbols chosen for Cashapillar, you’re first getting the poker cards, which are colorful and not exactly standard in the way they are drawn. Next, we’re starting to get the various insects, among which you will recognize the grasshopper, ladybugs, snails, cockroaches and caterpillars. There are two logos at the end, the feature triggers available here.

There are basically two symbols that you can use in the game to trigger the various features. The obvious first one to talk about is the one showing the Cashapillar logo, a stacked wild symbol that is available on all the reels of the game. These wild symbols are usable as substitutes for the regulars, so it’s of no help to you with the bonus logo. The wild symbol will also double any win that you land with it inside. With this symbol stacked, you could in theory have all the lines host combinations which have them inside, and as many as 2 million coins could be won if you had all 100 combos formed. The game mentions that it can pay up to 6 million coins during the free spins, where there are 3x multipliers applied, but you would once again need 100 combinations of 5 symbols to be formed at the same time. The scatter symbol that gets you 15 free spins needs to appear a minimum of three times on the reels. The image seems to be that of a birthday cake, with the word Bonus at the bottom. It will pay up to 100x total bet value.

Even though the game mentions potential wins of millions of coins, a single win line can pay at most 1,000x by itself, 2,000x with a wild inside and 6,000x if you get the wild during free spins. The actual value would be at $1,000, $2,000 or $6,000 per combination, respectively. Cashapillar gets an average RTP of 95.13%, which should be enough to make it an acceptable choice for a player that likes every other thing about it, but it doesn’t make it a must have title.

Cashapillar has a couple of advantages, which might make players to give it a try. I enjoyed the theme it has, the design and even the features, but it doesn’t pay as well as the paytable is trying to make you believe.