Candy Dreams has the theme that you can probably imagine, one that is related to candy that comes in all shapes and colors. Available from Microgaming, it is a new release of theirs, available since 2017, quite colorful and with a setup which involves variable reel sizes.
Play Candy Dreams
7Total score
Bonus rounds8
Graphics6
Soundtrack7

Candy Dreams has the theme that you can probably imagine, one that is related to candy that comes in all shapes and colors. Available from Microgaming, it is a new release of theirs, available since 2017, quite colorful and with a setup which involves variable reel sizes.

Thanks to the five reels with variable sizes, the slot machine has between three and five symbols per column, with a total of 720 ways to win resulting from this combination. It can be an expensive game to play, but it can also deliver large prizes, even reaching $100,000. Among the game’s features, you should expect a couple of types of scatters, along with wild symbols, free spins and a bonus game. 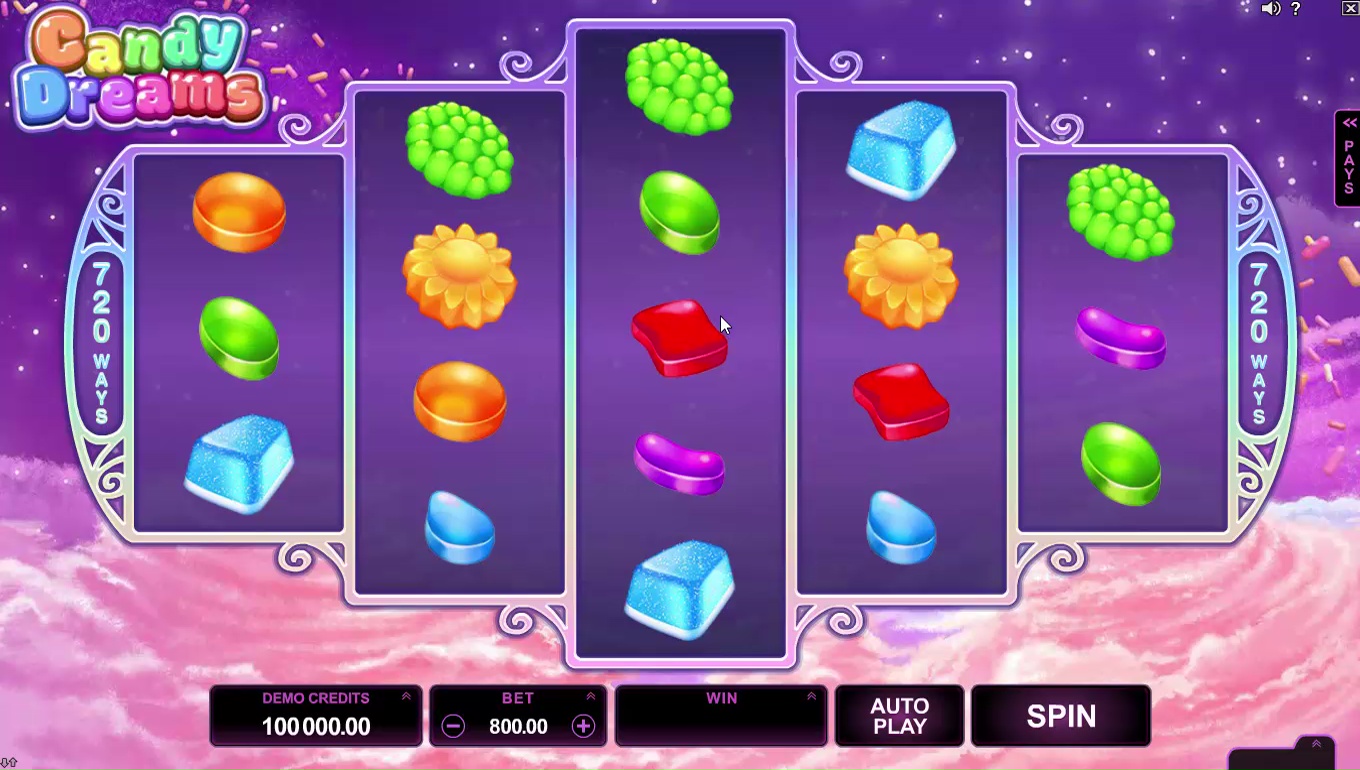 You might be forming combinations through the game’s 720 ways to win, but betting is still done via old fashioned active lines, since it’s much easier that way. You are getting 50 active lines each round for this purpose, on which you can set wagers that start at $0.50 and can reach $1,000. The line bet has as many as 10 coins covering it, with values of up to $2 for each one, so it can get up to $20 total.

As a candy themed slot machine, this is far from an original theme that it’s gotten. All the symbols that were picked for it are showing images of candy, coming in all sizes, shapes and colors. You have some that are sunflower shaped, or as teardrops, beans, jelly, others with flowers on them, and so on. Color wise there is variety there as well, and they come in orange, red, purple, blue and green. The reels are not standard ones, being of different sizes and surrounded by a silver border. We have the reels 1 and 5 with 3 symbols each, while the reels 2 and 4 get 4 symbols and the 3rd reel has 5.

As far as the background goes, I’d say that the quality there is actually higher than it is on the reels. The action appears to be taking place in the atmosphere, high above the clouds. Those clouds look like they are made out of pink cotton candy, and they have candy pieces flying in swirls above them. I would consider this a good attempt from the developer, but there are quite a few slot machines with a better design and a similar theme out there. It’s not a very unique game from that point of view.

The list of features in Candy Dreams is longer than in many other slot machines from the same developer, so they did spend a little bit more time with this part of the slot.

The first one to cover would be the wild symbol, which you can use as a substitute as usual, and which is also a way for you to form new combinations just with its own icons. These wilds can be of three types actually, with images of gifts, of the Wild logo and of the Candy Dreams logo. Their payouts are good, but nowhere close to those coming from scatters. The wilds can replace most symbols, but it’s not true of the two scatters.

Speaking of those scatters, one of them is going to show you the image of a lollipop, colored as the rainbow and surrounded by stars. It’s an image that will reward you when you see it in at least three symbols, even randomly placed ones. Three or more Lollipops will get you 12 free spins, plus a reward of up to $100,000 (100x total bet).

The other symbol acting as a scatter is showing you a round piece of candy which looks like a pink ringed planet, especially with those stars around it. Once again, to get anything from this symbol you will need it to appear at least three times somewhere in view. They will get you a bonus game, with the pink planet like candies arranged in the sky. There will be 20 choices for you to make, and you will keep getting prizes until you find the Pop icon. Extra life icons are also hidden in there. 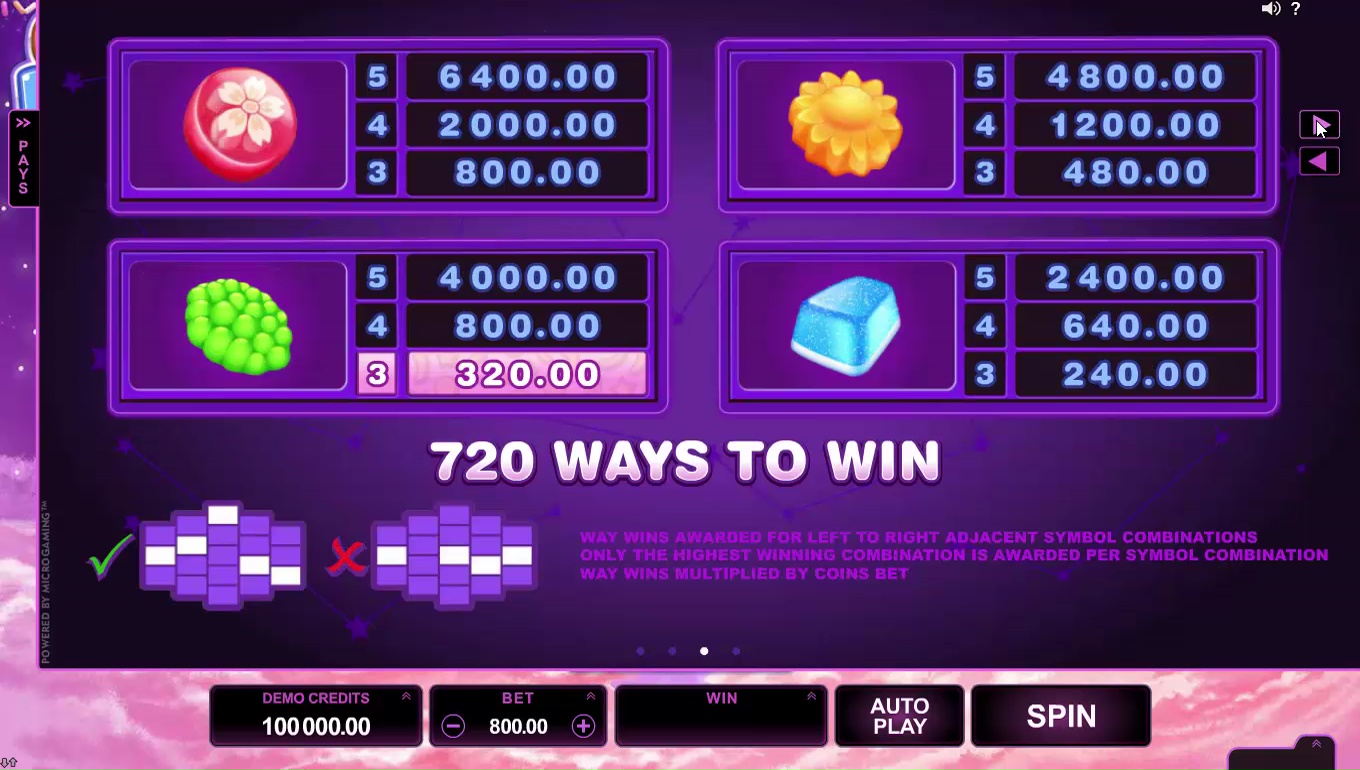 The rewards are not huge, especially if you look at the wagers that are required. You can win $100,000 at most, through either of the two scatters, but that’s just 100x the maximum wager possible in the game. The regular combinations don’t go past $10,000, which means just 500x the line bet.

In terms of average RTP, it appears to have one in the 95% to 96% range, which makes it an OK choice, but nothing to be impressed with.

Candy Dreams has an unusual gameplay style and layout if that’s what you’re looking for, but it’s not original in most areas and the average RTP is not better than in most titles that Microgaming releases these days. It seems like a rather average title for them. 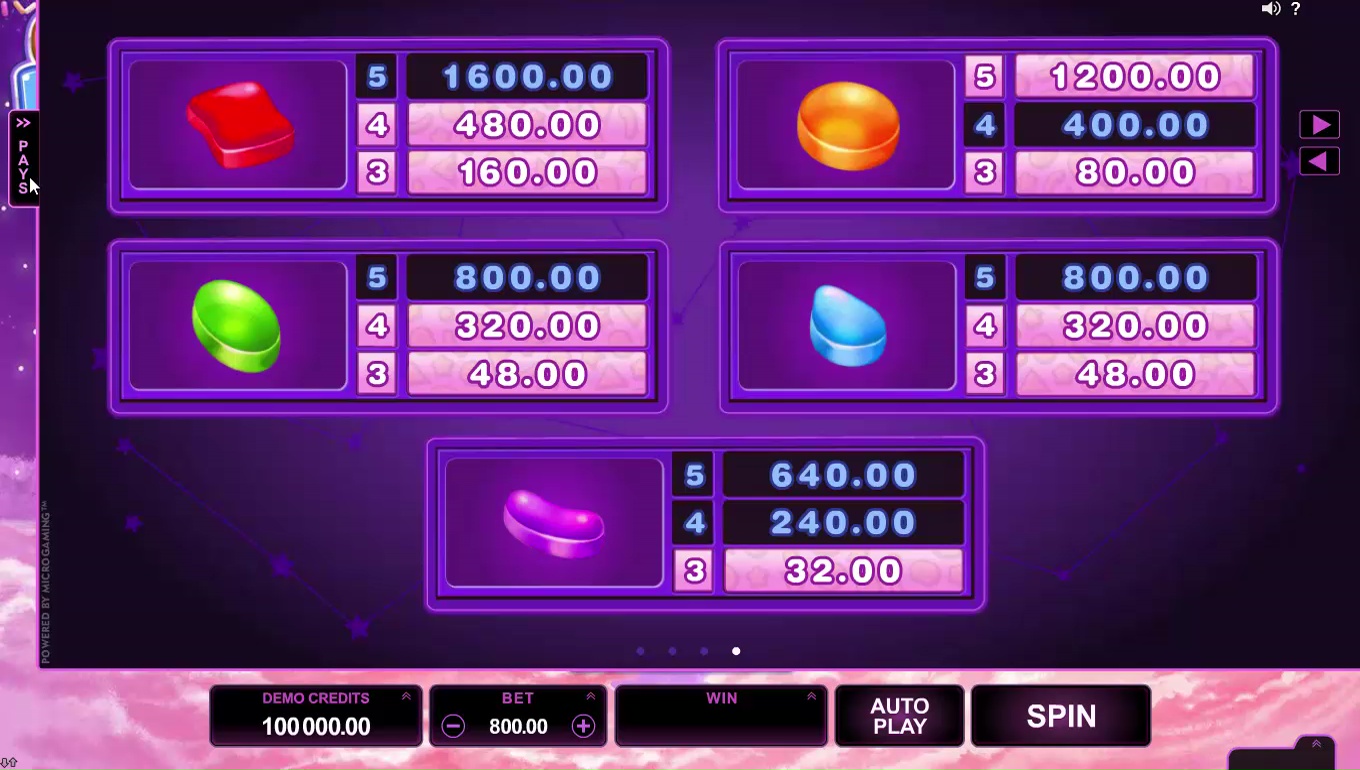