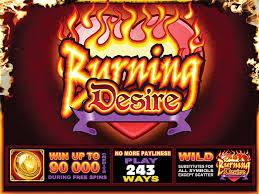 Burning Desire sounds like the sort of game that you would want to play on Valentine’s Day, a slot machine with a romance theme and with lots of pink hearts and fire in it. To some extent, you do get those things, and the slot does offer objects on fire, red roses and even hearts in some places. On the other hand though, this is also a game that draws inspiration from pub slots, using classic symbols in a lot of positions. I doubt anyone will get excited about the theme or the design of this slot, but hopefully the features will make up for that side. You’re going to get wild symbols, scatter symbols, free spins with tripled wins and it’s all done on a layout of 5 reels & 243 ways to win. The big jackpot delivers 3,000x or 9,000x, depending on the location (paid vs free spins).

In order to cover all the ways to win which are employed, 243 total, you will have the equivalent of just 25 virtual lines, which will be used for betting purposes and to determine how much the rewards should be worth. You decide only on the value of those line bets, not on the number of lines. You have a maximum of 10 coins usable on each line, with a denomination range which is between $0.01 and $5. Bets of up to $50 are allowed on each line, and so for 25 you can spend $1,250 per spin. Lower budgets are also accommodated though, the minimum amount needed in the game being $0.25.

Microgaming was never known for its unique themes or for offering great designs on a consistent basis, and in Burning Desire this is more obvious than ever. They chose a romance theme with a fire motif initially, but then they went with mostly classic symbols and poker cards. The fire is used on many of the higher paying symbols, but that doesn’t do much to mask that you’re still getting things like Bar logos, golden bells, red 7s, diamonds and gold coins. There is nothing to be impressed with here. Even the quality of the graphics is average at best. Microgaming launches about two dozen slots each year, and the impression is that they’re going for quantity over quality for the most part, at least where the graphics are concerned. They do have some games which are impressive to look at, but I definitely wouldn’t count Burning Desire among them.

One good thing about the choices they made for this game, is that they at least didn’t go with a simple layout, with a small number of lines, like classic inspired slots will often have. Instead, we’re getting the ways to win, 243 total. The combinations will be formed on neighboring reels, the only requirement being for them to match and to start from the left. The Burning Desire Logo, shown on fire and with a red heart behind it, will be a limited wild feature. Its limitation comes from the fact that it is used only on the columns 2 and 4. Otherwise, when it does appear it will be more useful than in other slots, since it just has to land on the right column, no matter where, and it can be part of any combo. Even the requirement for symbols to be on neighboring reels and starting from a certain side will go away, but only for one symbol, the one that is considered the scatter. The image used for it is that of a Gold Coin, which has a flame on it. There are rewards to be had when 2+ Gold Coins are visible, as high as 100x what the wager was. A feature with 15 free spins is obtained whenever 3 or more Gold Coins are visible in the game, anywhere on the reels. One advantage of theirs is that they have tripled wins, and this includes the top jackpot. Another one is the fact that you can retrigger free spins, if you happen to get an additional 3 Gold Coins on the reels.

There is no shortage of games that will offer the kind of Return to Player that this game has, or even better. They generally have a much more inspired theme and even a better design, so overall I’d go with another title over this one.