Olympus is a slot machine that was dedicated by Genesis Gaming to the gods of Olympus
Play Olympus
7.5Total score
Bonus rounds8
Graphics7
Soundtrack7.5

Olympus is a slot machine that was dedicated by Genesis Gaming to the gods of Olympus. These are the gods of the Ancient Greece mythology, starting with Zeus and continuing with Hades, Aphrodites and others. It’s not a rare theme, but what matters most is how it was implemented. As for the actual game, you’re going to play on 5 reels that give you 243 ways to win. The big payday in the case of Olympus comes in the form of a $15,000 payout. There are also some pretty interesting features to look out for, with scatters, wilds, multipliers, random bonus games and five types of free spins, each one with its own extras. 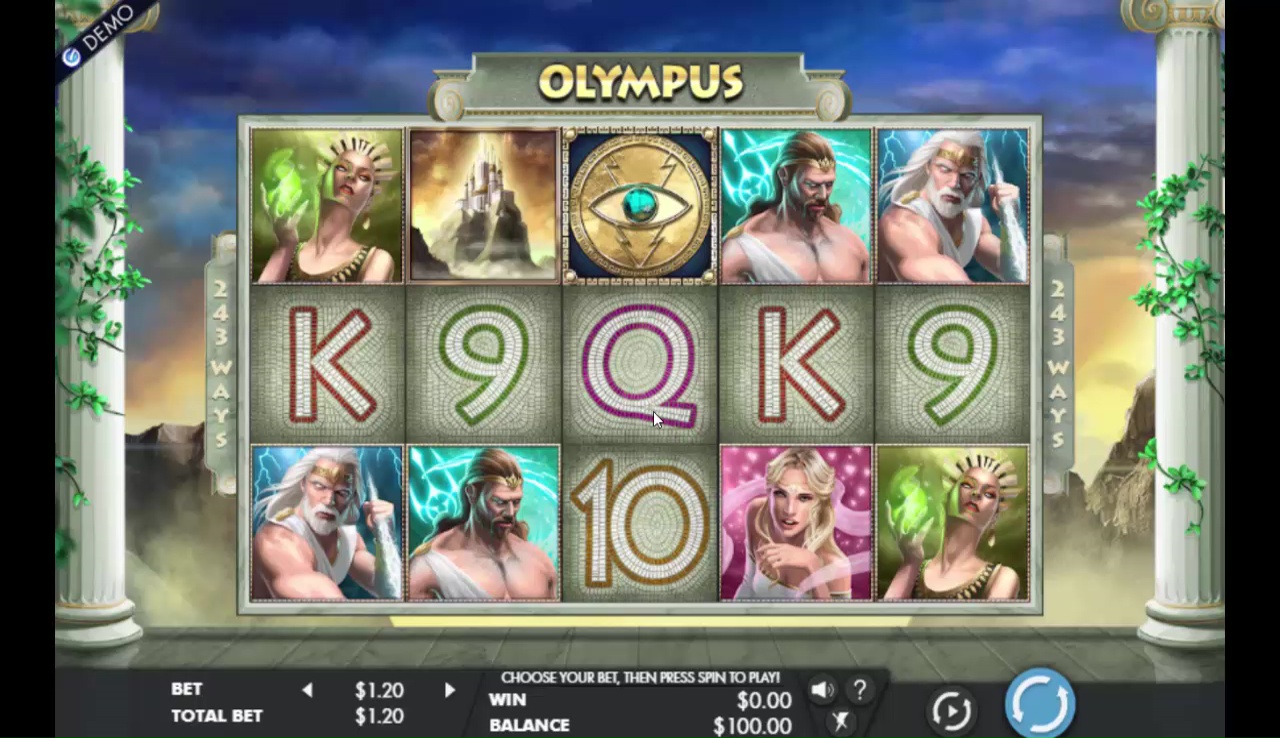 For Olympus and its 243 ways to win, you’re going to be required to play with the equivalent of 30 active lines, whenever the wager system is involved. Those 30 lines are fixed for the purpose of the wager, and you are asked about selecting the line bet only. The game allows for a wager as small as $0.30 to cover all the ways to win. On the high side, you can get up to $60 with the wager, using up to $2 on each of those lines.

Slots that are dedicated to the Ancient Greece gods are not rare at all. These games seem to be favorites for developers, but they’re not always well designed. I think that Genesis Gaming actually ended up with something decent in Olympus, a slot machine where you get to play with symbols that revolve around Zeus, Poseidon, Hera, Aphrodite and Hades. Each of these symbols has corresponding features, free spins that are associated with them, and it helps make the game more enjoyable. Though you get images of thunderbolts and shields as well, all the lower paying symbols are relatively simple and sport images of poker logos on them. That’s the downside that I see with the design, that it doesn’t go all the way with its choices. The quality is good, though not the highest that you will see around. Among the Ancient Greece themed titles though, I’d definitely put it at the top.

The Lightning Bolt is the wild feature in Olympus, and a symbol that comes in two different variants. The regular variant is for the base game, featuring a lightning bolt coming down from the heavens, with blue clouds in the background. This is the wild symbol that can have a variant with a multiplier attached, which will double the wins it helps form. It’s not a guaranteed multiplier though. Wild symbols may form combinations themselves, and they can even benefit from that multiplier if it shows up, so it can end up offering up to 1,000 coins. Thunderbolt is the name of a random feature, which can occur at any point during a regular spin. If triggered, it will transform up to five reels into wilds, after which you will get paid. The Shield scatter is another feature symbol that you can get while playing Olympus. Its cash rewards come when you have at least two such symbols present, and they can get up to 250x total bet. Besides getting paid by this symbol, it will also give you access to a feature with free spins, if you land at least three symbols. There are five possible free spins features available, but you don’t get them all at once. You unlock new features in time, as you continue to trigger this feature. You start off with the Goddess of Love feature, which will get you 15 free rounds where multipliers are at 3x for all wins. Next, you unlock Underworld Feature, with 20 free spins and extra wilds. Queens of the Heavens comes next, giving you 25 rounds and a wild multiplier. Poseidon’s feature consists of 25 free spins, along with Morphing Wins. Finally, you get to access Power of Zeus as well, and there you get 25 free spins that benefit from Mega Retriggers. 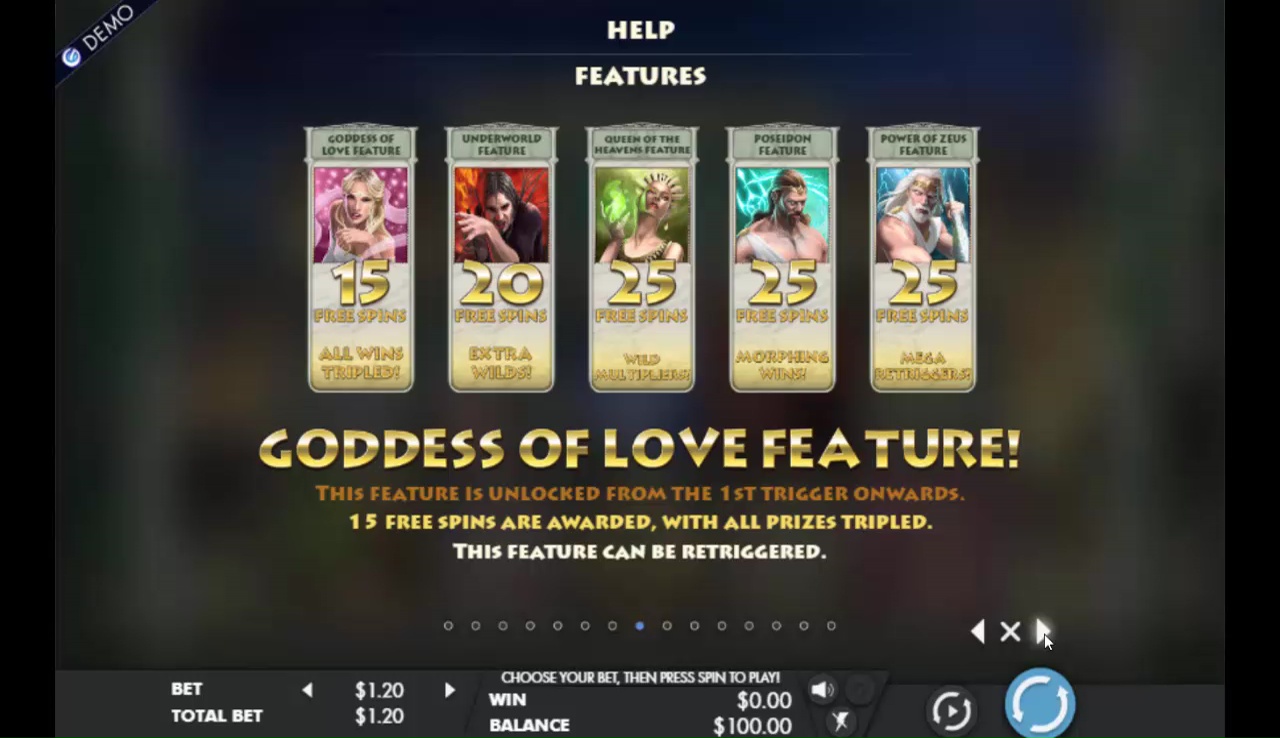 Though the regular combinations have the multipliers to improve their value, in the end it’s still the scatter symbol that can pay the most. This symbol, when appearing on all five reels, it can multiply the wager that you’ve used that round by up to 250x. For this game, that can be turned into a reward of $15,000. Genesis Gaming wasn’t shy about sharing the average RTP of Olympus, and it’s understandable since it’s on the high side. It sits at 97.25%, which is above what the majority of the games released so far have offered.

Considering everything that we’re offered in Olympus, I’d call this a slot machine that you shouldn’t ignore. The theoretical RTP is the one that sold it for me, but the rest of the features and the graphics helped as well. 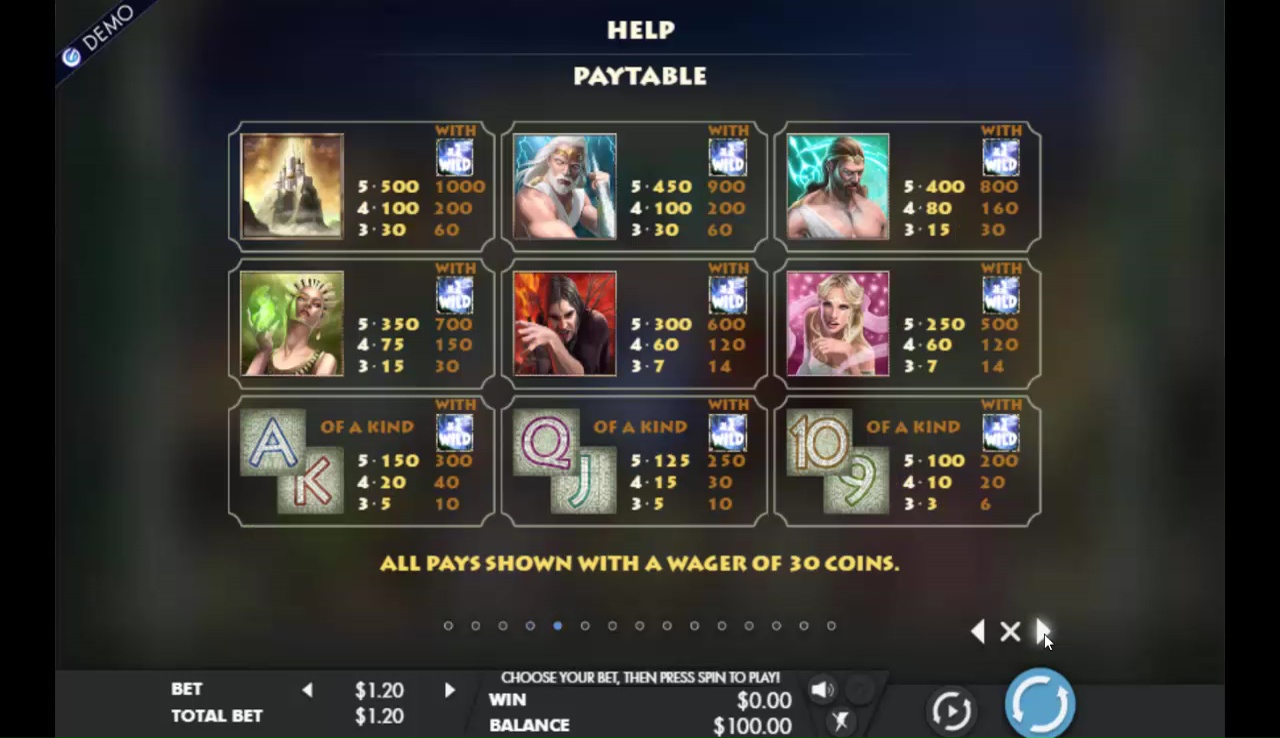